It's been around for centuries. 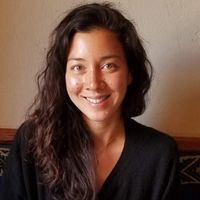 Krista Carter
Krista Carter has worked in beauty and fashion for nearly a decade. Previously, she was global lead producer at Estée Lauder Companies. She has been writing and editing for Byrdie since 2019.
Byrdie's Editorial Guidelines
Medically reviewed by
Maryann Walsh, MFN, RD, CDE

The first time I tried mate (pronounced: ma-tay), I was studying abroad in Spain. While the energizing herb is not popular with Spaniards, it is somewhat revered in certain parts of South America. I was meeting up with a friend who was dating an Argentine, and she had picked up the custom of tomar mate (drinking mate) and offered me some while we hung out in our hostel. Whipping out a hollow gourd, she filled it with some dried leaves, inserted a metal straw, and carefully poured hot water over the top before taking a few sips. She cautioned when passing it to me: "It's an acquired taste."

Over a decade later, and as an ex-pat living in Buenos Aires, I'm writing this while sipping on some mate of my own. Sure, it's not the traditional way to drink the infusion (more on that ahead), but it's becoming more common and showing up in unique ways as time changes. To learn more about this centuries-old beverage and how it remains relevant today, I tapped Romina Barritta, an expert on the subject matter. From its purported health benefits to its cultural and social significance, keep reading for our complete guide to yerba mate.

What is Yerba Mate?

"Mate is an infusion drink made by brewing the dried leaves of the yerba mate tree (Ilex Paraguarensis)," Barritta tells me. "In South America, mate is typically drunk out of a dried gourd using a metal straw with a strainer called a bombilla." It is enjoyed by various Hispanic and Latino cultures, primarily in Paraguay, Uruguay, Argentina, and parts of Brazil, Bolivia, and Chile. "98 percent of Argentine households consume yerba mate on an average amount of 100 liters of the infusion per person per year. In Argentina and Uruguay, a regular consumer can have three liters daily," says Barritta.

The Benefits of Yerba Mate

Thanks to its antioxidant properties, mate is believed to be a superfood. According to Barritta, one of the most notable characteristics of mate is its high antioxidant capacity, specifically, its concentration of polyphenols. This translates into several health benefits:

How is Yerba Mate Different from Coffee?

Given its caffeine content, mate drinkers often reach for the energizing tea when needing a pick-me-up. In that sense, it's not so different from coffee—but is one better than the other? According to Barritta, "Both mate and coffee can have beneficial and negative effects. Some argue that coffee can have a stimulant effect that can be too strong, while mate 'awakens' those who drink it in a more dosed and pleasant way. This is because the caffeine in the mate is more diluted in a larger amount of water, which is taken little by little." Whether you decide to drink coffee or mate will ultimately come down to your personal preference and caffeine tolerance.

"One cup of mate tea made from a tea bag contains about 13 mg caffeine. It increases to 65 to 75 mg per cup when mate is drunk in the traditional way (two ounces of dry leaves are packed into the gourd or container, and about 20 ml (less than 1 oz) of hot water is poured into steep, and then sipped through the strainer. More water is added multiple times until as much as half to one full liter of water has passed over the leaves)," explains Barritta. By comparison, coffee contains 80 to 100 mg of caffeine per eight-ounce serving.

How to Drink Yerba Mate

For many materos (mate aficionados), yerba mate isn't just a drink; it's a way of life. The act of drinking mate can take on an almost ritualistic quality. Traditionally, it's drunk in a social setting (although there's nothing wrong with having it solo, either). Friends gather and take turns drinking mate from the communal gourd (and the same straw) and passing it around. The experience is like grabbing beers with friends—minus the alcohol. And while there are a few dos and don'ts to drinking mate, everyone has their preference and opinion about which way is best. Typically, it's prepared without additives and served hot; however, for the non-traditionalist, mate can be enjoyed cold and/or with sugar added to cut the bitterness.

Byrdie Tip: If you're the cebador (the person preparing and serving the mate), it is customary that you take the first sip since it is the most bitter.

The most common and traditional way to enjoy mate is by imbibing in the herbal drink. However, the beauty industry has caught onto this buzzy wellness ingredient and is now promoting the benefits of applying it topically. According to Barritta, "Some plant-based cosmetic companies started to use yerba mate as an active compound in their products, like shampoo and conditioner, body soaps, gels, and lotions."

Good Molecules Yerba Mate Wake Up Eye Gel ($6) and Youth To The People Yerba Mate Resurfacing + Exfoliating Energy Facial with Enzymes + Niacinamide ($54) are just two products that count yerba mate as a key ingredient, capitalizing on its antioxidant properties and caffeine content. "Inspired by the guaraní culture, some spa centers in Misiones, Argentina, offer beauty treatments and massages with yerba mate," she adds.

Side Effects of Yerba Mate

Yerba mate boasts a number of health benefits, but are there any downsides to drinking this wellness beverage? According to Barritta, "Mate is safe for pregnancy and lactation in moderate consumption." However, she says you should be cautious of drinking more than two liters daily if you're sensitive to caffeine.

Barritta notes that some epidemiological studies associated drinking large quantities of yerba mate over extended periods with some types of cancer, such as cancer of the throat. However, there is inadequate evidence to support this claim and no significant study indicates mate consumption as a risk factor for cancer. If you have any questions about the benefits of adding it to your lifestyle, you can always consult your doctor for a medical opinion.

Whether you're drinking mate to celebrate cultural heritage, spend time with friends, boost your energy—or all of the above—there's no wrong way to enjoy this ancient herbal tea (despite what some enthusiasts may tell you). Cultivated and consumed for centuries, mate has been shown to wield benefits for mental, physical, and social health. And while it's easy to drink (once you've grown accustomed to its bitter-tasting leaves), as with pretty much everything, it's best enjoyed in moderation. Salud!

Green Tea Is the Superhero Ingredient for Everything From Acne to Anti-Aging
Article Sources
Byrdie takes every opportunity to use high-quality sources, including peer-reviewed studies, to support the facts within our articles. Read our editorial guidelines to learn more about how we keep our content accurate, reliable and trustworthy.