Take a Look at the Fascinating History of Women's Exercise

Today, we are inundated with a huge selection of group fitness classes: yoga, Pilates, cycling—you name it. We've entered a very fitness-centric era—a "trend" we can certainly get behind. And while the 2020s are surely a time of social media–charged classes, the progression women have made in the workout world is incredibly fascinating (and empowering). We've moved from exercise machines that literally rubbed your body as a way to remove fat to HIIT (high-intensity interval training) sweat sessions. It's safe to say that within the past century, women have morphed into full-blown fitness badasses.

"Workout trends change with the times and, just like so much else, they are inextricably related to the zeitgeist of their moment," says Daniel Levine, trends expert and publisher of WikiTrends. It is always fun to look back, as well as look ahead at the next fitness trends, including virtual fitness classes.

Daniel Levine is a trends expert and keynote speaker. He is the publisher of WikiTrend.org and the director of Avant-Guide Institute. He is the leader of a huge international team of "trend-spotters," who unearth the latest ideas, products, and experiences from around the globe.

Take a look at the progression of women's exercise trends through the ages!


Theodore Roosevelt was one of the first presidents to encourage Americans to exercise and to be physically fit. After World War I, however, we moved into a time period known as the Roaring Twenties. This was a time when Americans weren’t as interested in exercising, but rather preferred partying, eating, and drinking.

The early 1900s saw a great deal of stretching as the exercise of choice (a pre-cursor to yoga, we presume), which eventually made its way into machinery.

Stationary bikes, rowing machines, and the Vibro-Slim, a vibrating belt that massaged the body, were popular methods of exercise. A machine that requires no effort but standing in place while it goes to work sounds equal parts amazing and completely nonsensical.

In 1910, yawning was a wellness trend that was thought to be valuable exercise for the lungs. Dr. Emil Bunzi said that, “yawning brings all the respiratory muscles of the chest and throat into action, and is, therefore, the best and most natural means of strengthening them.” He recommended, “six to eight yawns, each followed by the operation of swallowing.”

Activewear has come along way from what they wore in the start of the 20th century. The 1920s woman's idea of activewear: dresses, high heels, and pearls. My, how far we've come. Of course, you don't really need activewear when your workout consists of a Vibro-Slim and yawning!

This era was all about repetitious movement using one's own body. In this video, you'll overhear a male voiceover explaining that the twisting movement will get rid of "spare tires around the middle." Le sigh.

"Prior to 1940, if people worked out at all, it was probably at the YMCA, which launched their groundbreaking exercise classes," said Levine. This was also the period that people started dedicating a block of time to working out.

Believe it or not, cigarettes weren't known to be a health risk in the 1930s. In fact, many cigarette ads at the time featured doctors touting the benefits of smoking. Some packs of cigarettes came with exercise cards. You know, so you could smoke and exercise at the same time. It wasn't until 1964 that the U.S. Surgeon General said that smoking caused cancer and other health issues.

Women were no longer wearing high heels and pearls to work out in the this decade. They wore a one piece short outfit, similar to what we call a romper today, with bloomers. They swapped out their heels for zippered gym shoes as well.

"Like so many fads that came before, the workout revolution started in California, led by Jack LaLanne, who opened what may have been the first health club in America," says Levine. "Gold's Gym, in particular, became a model for gyms like these everywhere, presaging the gym culture that we know today."

In the 1950s, workouts were all about calisthenics and even Hula hooping (which is actually a really amazing ab workout). In 1968, the word "aerobic" was first used, as a doctor named Kenneth Cooper published a book of the same name that touted that this new workout was "the most effective physical fitness plan ever for men and women." For the first time, women sweating while working out was not only accepted, but encouraged.

The health clubs were a popular spot to exercise. "The resistance machines and weight rooms in these early clubs would be quite recognizable to anyone who goes to the gym today," says Levine.

This was the time period that people began to see the benefits of self-care. The first at-home massager was used in this decade. It was a roller massager and consisted of wooden rods on a rotating drum that you rolled over your back, arms, stomach and legs. It was touted to help you relax, but also it was supposed to help you lose weight or trim up your muscles.

"This era also gave birth to the health club chain: clean, well-lighted places that encouraged both women and men to get into shape. This was still an era of resistance machines and free-weights, however, and the aesthetic was all about 'body sculpting,'" says Levine.

In the 1950s, women were dressing a little more sporty, wearing cotton leotards, often with collars. All that would change in the late 1950s. "Invented in 1959, spandex immediately took over the workout world and has rarely looked back," says Levine.

"Let's get physical" was the theme of the '80s. Step aerobics, leg warmers, and tights were the name of the game—think Jane Fonda exercise videos, Richard Simmons' Sweatin' to the Oldies and "Physical" by Olivia Newton John.

Believe it or not, people rarely would go for a jog for exercise before this decade. "The 1970s was the beginning of jogging as a popular activity," says Levine. "Before then, you would almost never see people running on the street or in the park."

"Towards the end of the '70s, Jazzercise appeared and people started signing up for group classes," he said. "Workouts of this era are inextricably related to the rise of aerobics classes, led by teachers and performed to dance music. This is so much a part of today's workout world that it is hard to imagine that there was a time when we weren't directed to 'kick that butt' and 'feel the burn!'"

The first diet pill, Dexatrim, became popular in the 1970s, as did The Grapefruit Diet, in which you ate a grapefruit for every meal. The Sauna Suits were another wellness trend. You would wear this full body plastic suit and it promised you would sweat the pounds off.

This decade had a very distinctive activewear look, thanks to the creation of spandex. Women wore leotards, often belted, along with tights and leg warmers. The natural look hadn't caught on yet, as women would often exercise with a full face of makeup and curled hair, which was hairsprayed to perfection.

Another groundbreaking invention in this decade? The sports bra! 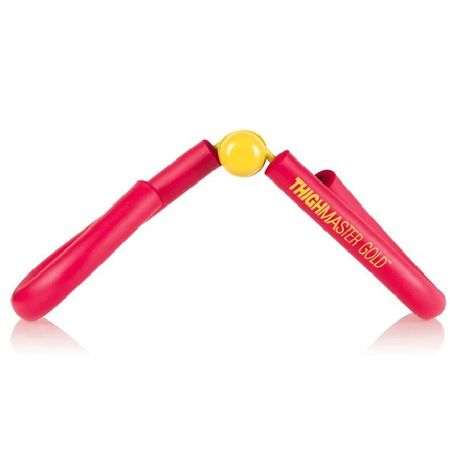 Women everywhere were all about the ThighMaster in the '90s for toned inner and outer thighs. But women were focused on toning another body part during the '90s and 2000s as well: their bums.

"Here's when it all blew up in multitudes of different directions: Step aerobics, Spinning, Inline Skating, NordicTrack, Zumba, Barre, Kickboxing, Tae Bo, Buns of Steel, and, of course, who can forget the Thighmaster?" said Levine.

Buns of Steel was a famous video series that worked the tush right from the comfort of your living room. Transitioning into the 2000s, Tae Bo, a martial arts-dance fusion class was all the rage. You couldn't turn on the television without seeing Billy Blanks on your screen.

Yoga studios also began popping up in this decade as people started seeing the benefits of this exercise.

Optifast shakes became all the rage, especially after Oprah announced she had lost almost 70 pounds in four months due to this liquid diet. Frozen diet meals Lean Cuisine were also a popular trend this decade. The Ab Roller was the must-have home exercise equipment to tone the midsection.

This was the decade of scrunchies, crop tops, and fanny packs. Activewear in this decade was brightly colored and colorblocke and big, clunky sneakers were all the rage. People were still wearing leotards and tights, however, leggings were also starting to become popular.

"These are the days of SoulCycle, athleisure, and a doubling-down on yoga, where clean eating and physical activities that take a holistic approach to health," says Levine.

Trendy group classes like Tracey Anderson Method, Y7 Yoga, and SoulCycle are the exercise styles du jour—it's all about getting sweaty with a group to an incredible soundtrack. It's no wonder ClassPass sessions have jumped to a whopping $99 a month.

The Pineapple Diet was all the rage this decade. On this eating plan, you only ate pineapple two days out of the week. Needless to say, this diet is no longer encouraged today. Keto Diets were also starting to take off during this timeframe.

The Shake Weight was a huge home exercise trend, with the ads promising you could shake your way to fitness.

Activewear in this decade turned into athleisure, with women wearing their workout clothes not just to the gym, but also out running errands. Brands like Lululemon exploded in popularity, with their high-end activewear that was as functional as it was stylish.

Toning shoes, such as those made my Sketchers, promised you could get in shape as you walked. They were later made to pay a settlement as the Federal Trade Commission said they deceived customers with their ads.

"So, where is this all going? Online, of course," says Levine. "Look to the success of Peloton to inspire other forms of working out remotely. Alone, but together. "