Erin Jahns
Erin Jahns is a hair, makeup, and nails expert and beauty editor with over five years of experience in the industry. She is currently the senior beauty editor at WhoWhatWear.
Byrdie's Editorial Guidelines
Medically reviewed by
Brooke Alpert, MS, RD, CDN

A buzzy diet touting weight loss, appetite regulation, healthy metabolism, and reduced susceptibility to conditions like heart disease and diabetes is hardly newfound. After all, we live in a diet-obsessed world constantly on the verge of "the next big thing" when it comes to quick and easy fixes.

And while certain diets and eating habits can be an instrumental (and sometimes imperative) tool, we've become somewhat loathe to top-trending eating plans promising superhuman turnarounds where our energy and various circumferences are concerned.

Every person has unique needs, and what feels amazing for one person might feel miserable for the next—c'est la vie. So these days we're more into the idea of having an intuitive, non-restrictive relationship with our food, rather than a dramatic one. However, that's not to say that certain dietary plans don't have some validity and potential benefit—they can—especially for those with restrictions stemming from food sensitivities and allergies.

One such diet that's been on people's radar for years now is the wheat belly diet, created by cardiologist William Davis, MD, and based on his New York Times best-selling Book, Wheat Belly. And though it's been around since 2011 (that's ages in diet years), people still have a lot of questions. From benefits to counterarguments, to, yes, even a shopping list, keep reading to find out everything you ever wanted to know about the wheat belly diet. 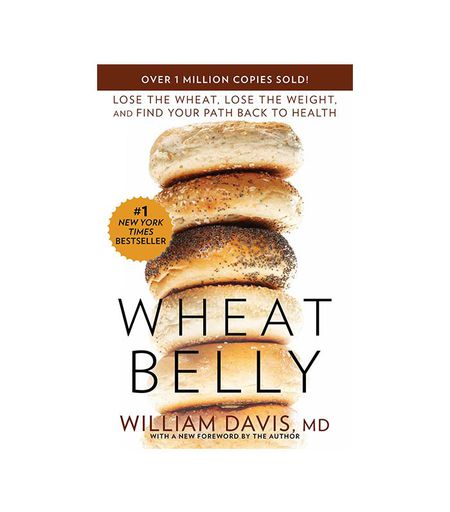 William Davis Wheat Belly: Lose the Wheat, Lose the Weight, and Find Your Patch Back to Health $7.00
Shop

In a nutshell, the wheat belly diet revolves around what you're not eating (hint: gluten), rather than keeping tabs on things like calories and macros. (Although by eliminating all forms of grain-based carbohydrates, the thinking goes that you'll naturally slash some calories, as well.)

Essentially, the diet is a gluten-free lifestyle that cardiologist William Davis views as a "self-empowering" method to establishing "optimum health." It focuses on replacing all grain-based carbohydrates with naturally gluten-free whole foods like vegetables, proteins, healthy fats, and a limited variety of certain fruits. And though the diet is technically characterized as "gluten-free," that's not to say Davis advises filling your grocery cart with highly processed fare like gluten-free crackers, cookies, and the like.

“Contrary to popular wisdom, [...], there is no deficiency that develops from the elimination of wheat—provided the lost calories are replaced with the right foods. If the gap left by wheat is filled with vegetables, nuts, meats, eggs, avocados, olives, cheese—i.e., real food—then not only won’t you develop a dietary deficiency, you will enjoy better health, more energy, better sleep, weight loss," and reversal of other gluten-related symptoms, he explains in the book.

According to Davis—virtually all forms of wheat and grains (even the 100% whole varieties) are detrimental to our health due to the way they've been hybridized over the years. In fact, in his book Wheat Belly, Davis contends that the majority of wheat in the American diet bears little (if any) likeness to the wheat our earliest ancestors would have consumed. His claim: The consumption of wheat can lead to insulin resistance, which in turn can cue the body to store extra fat.

Though the wheat belly diet stipulates cutting out all gluten, wheat, and carb-heavy foods will result in benefits like hastened weight loss, steadied blood sugar, improved digestion, and a lessened risk for obesity, heart disease, and other serious health conditions, some still take issue with the diet. In fact, various studies have maintained that wheat hasn't been genetically modified to the point of causing issues for human health, and important institutions like the Canadian Celiac Association, the American Heart Association, and the American College of Cardiology still won't advocate gluten-free diets as healthy for anyone other than those with celiac disease.

Additionally, some nutritionists argue that restricting entire food groups (unless, of course, you're intolerant), such as carbs, dairy, etc., can lead to an unhealthy and even dangerous relationship with food.

Thus, as with most diets, it becomes a controversial game of he-said-she-said, which is why we strongly advocate doing your own research (as you should before adopting any kind of new dietary plan) and experimenting with a vibrant array of foods and recipes that you find make you feel your happiest and healthiest.

However, if you know (or think) going gluten-free might be a healthy step in the right direction, that's definitely something to explore. And so to make your life just a tad bit easier, we created a gluten-free, wheat belly–approved shopping list to get you started. (Just make sure to consult with a physician before grabbing a cart.)