"Self-care" is a word that's infiltrated Western culture with gusto over the past few years. The combination of a contentious political climate and increased mental health awareness has inspired folks to try new wellness habits, from colouring for grownups to sound bathing. Personally, I admit that I'm sceptical of many of the self-care "trends" that have found a place within the saturated wellness marketplace (I don't know how much faith I have in the ability of a skin sticker to cure your anxiety, for example). But I do have a great deal of confidence in a few choice self-care habits, not least of which is daily journaling.

I've heard enough psychologists sing its praises and have spoken to enough habitual diary keepers to feel certain that putting your thoughts and feelings in writing at the end of each day can have major mental health benefits. As social worker Maud Purcell, LCSW, told PsychCentral.com, journaling is a tradition that dates back to at least 10th century Japan and that some of history's most successful figures from presidents to writers have sworn by it. (As Oscar Wilde once said, “I never travel without my diary. One should always have something sensational to read on the train.”) According to Purcell, journaling can help you clarify your thoughts and feelings, know yourself better, reduce stress, and resolve disagreements with others. There is truly no downside to the practice.

And yet... I have never been able to make a habit out of it. Every time I've caught a bout of inspiration and resolved to start writing in a journal regularly, the routine has lasted about three days. It might be because the last thing I want to do at the end of a day of writing for work is to write more, or it might be just because journaling with a pen and paper feels too formal and awkward. Either way, I've never been able to stick with it.

A few months ago, however, I met a Los Angeles-based software engineer named Matt Schwarz who launched an app this past March aimed at turning millennial non-journalers like me onto keeping a diary once and for all. The free app is called Maslo, and it features a delightfully simple AI robot—a "digital companion" they call it—that invites users to record voice journal entries up to sixty seconds in length at a time. The app listens to whatever you had to share, then about a minute later, it spits out a word cloud based on your entry, displaying linguistic patterns that reflect where your feelings were in the moment, as well as an emoji representing its interpretation of your emotional state.

You can record whatever you like from long aimless rants to small observations—no entry is too minimal. If you get stuck on what to talk about, you can even choose to answer some of Maslo's preset prompts like "What type of pizza would you be?" and "Tell me about the things that slow you down." Schwarz has labelled the practice "snap journaling" and though it's not as traditional as a pen and paper, that's what I love most about it: It makes journaling as quick and accessible as every other technology-focused activity in my life, but offers the same sort of venue for self-reflection and emotional management. 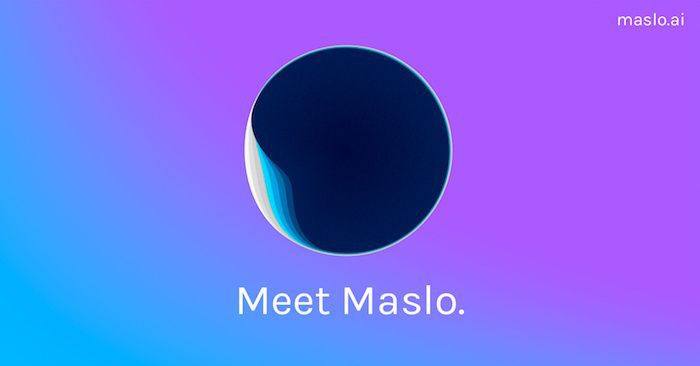 Schwaz founded the app alongside ex-Googlers Cristina Poindexter and Ross Ingram as a way to marry self-care and technology for millennials. "By showcasing how technology can assist with a person’s overall wellbeing and become a true companion, Maslo is separating itself from being just another 'digital assistant,' but rather an entity you want to interact with because you are building a relationship," Schwarz explains. He hopes the app will help combat some of the widespread fear of artificial intelligence that exists in our culture. "The truth is that there are so many technologically-based resources out there that can actually help people from a mental and/or emotional point of view," he says.

Schwarz personally relates to the inability to stick to journaling as an adult. "When I was younger I used to keep a written journal, but as I got older I found less and less time to do this," he told me. "Moreover, I would never go back and read what I wrote. At the end of the day it was a good way for me to get thoughts out of my brain, but it wasn’t something I could revisit nor could I really track how it helped me grow as a person."

Since the launch of the app Schwarz and his team have acquired a myriad of positive feedback from users, who've been enjoying the ease and personability of snap journaling with Maslo. "If you’re having a particularly tough day it’s nice to be able to simply speak to Maslo like you would a person and share your experience in the moment while it’s fresh, also knowing that it’s going to be easy to find this entry later if you want to revisit it," he says. "From overall sentiment, to people, places, and things you’ve mentioned, you start to notice patterns in yourself. ... In this way Maslo has turned 'snap journaling' into more than just a familiar social-media-type action, but a way to convert your effort in personal reflection into something worthwhile to you."

Next up: Don't miss five things to remember if you want to start journaling.