I Had a Really Sun-Damaged Chest, So I Lasered the Dark Spots Off

Real talk: There are very few modern devices, treatments, or technology I’d say no to trying in the name of beauty. I’m all for a little enhancement, especially when it comes to my skin. I have been taking care of my largest organ since my mom put me on a cleanse, tone, moisturize, and sunscreen routine when I was 14 years old. I grew up in Australia where there is a hole in the ozone, so SPF and the slip, slop, slap mantra was ingrained from birth. This simple-but-effective routine, along with a healthy diet, kept my skin in pretty good shape—until I had a baby and experienced melasma aka the “mask of pregnancy,” which resulted in several IPL treatments. Tack on another 10 years of parenting (mamas reading this will know what I mean) and my face was looking more than a little tired and dull. So, at 37-years-old I opted for a little under-eye filler and a lip bump, because why not. It was just the right amount, and no, it did not make me look clownish or cartoonish. In fact, people kept asking me what skincare I was using because my face looked so fresh. It was an actual game changer.

But I digress, because we’re here to talk about Fraxel, after all. As I left my 30s and embark on my 40s, I noticed my décolletage was feeling neglected. I had spent all this time freshening up my face that I forgot about my chest area. In fact, this is one area many of us ignore. According to esthetician Joanna Czech, “Your face starts at your hairline and goes to your nipples.” Though I truly believe that, I didn’t always follow through with it in my at-home routine. Plus, even though my mom covered us in sunscreen as children, we were playing on the beach or outside in the sun every day almost all day, so after 39 years, that takes its toll on your skin. For me, it resulted in sun damage and hyperpigmentation on my chest. After seeing my mom have several basal cell carcinomas removed from her chest (this is the most common form of skin cancer that affects sun-exposed areas like the face, neck, and chest and while they are slow growing, they can become dangerous if left untreated) I decided it was high time I had my own chest looked at to take better care of it and prevent any skin cancer from forming in the future.

So, I booked an appointment to see Nancy Samolitis, MD, FAAD, co-founder and medical director of Facile Skin dermatology and boutique in West Hollywood for a consultation. After taking a look at my chest, I was given the all clear on skin cancer (phew) and she told me that the best form of prevention while clearing up old sun damage was the Fraxel laser. I had heard of this laser before and knew it was pretty intense, but after speaking with her about it in-depth, I felt comfortable moving forward.

Read on to learn more about this laser, how many treatments I had, what it costs, how painful it was, the recovery time, and why it was the best preventative and restorative treatment for my chest. (FYI, I also had my arms done).

What Is Fraxel and What Does It Treat?

In short, Fraxel is a device that performs a treatment known as fractional laser resurfacing. Samolitis tells me that, compared to traditional laser resurfacing, only a fraction (usually between 20 to 40 percent) of the skin’s surface is treated, allowing faster, safer healing, and decreased risk of complications. Fraxel is typically used to treat skin that is damaged from the sun or scarred from acne or trauma. The cost can vary greatly depending on the type of laser and number of treatments needed, however you can expect it to set you back around $1500 to $2000.

• A smoother, more even surface

Fraxel is typically used to improve the texture of skin, targeting redness, sun damage and scars. But on top of clearing skin, Fraxel can also reduce the risk of skin cancer. As a dermatologist, Samolitis has been treating skin cancer and using fractional resurfacing devices for over 15 years, so she knows firsthand how beneficial they can be as a preventative treatment. “Since your skin is repairing itself during the healing process (after Fraxel), it has been scientifically shown to reduce the number of pre-cancerous cells and likely also reduce the risk of certain types of skin cancer in the long term,” says Samolitis. Not only that, she says you also get beautiful results with fewer sessions.

Fraxel vs. Other Laser Treatments

Before deciding on Fraxel, you should also be aware of the different types. Each of the lasers are differentiated by their wavelength. “In the case of resurfacing, we usually break these up into ablative (causing ablation, controlled burn) and non-ablative (causing heat-induced injury without a burn) types,” explains Samolitis. “The ablative types (such as CO2) are used for more aggressive treatments and have longer recovery times and more intensive skin care.” The fractional lasers at Facile are called the Fraxel Dual and the Clear and Brilliant. These are similar wavelengths, adds Samolitis, but the energy delivered by the Clear and Brilliant is much lower, allowing minimal recovery time. “The Fraxel Dual is extremely versatile and has infinite treatment combination parameters depending on the patient's skin needs,” she notes.

Since fractional resurfacing lasers target water in the skin, Samolitis tells me they provide a predictable outcome in any patient because you can control the amount of energy delivered in an even fashion. Other lasers that are used for hair removal, redness, and tattoos have a specific target that the laser is attracted to (blood, pigment, etc.). “For example, if a hair removal or vascular device is used on a patient with darker skin (more melanin), the amount of energy absorbed can be less predictable, leading to a burn or loss of pigment,” she explains.

How to Prepare for a Fraxel Treatment

Thankfully, there isn’t much preparation needed for this treatment other than being aware of the recovery time. Samolitis says avoiding sun and potentially irritating skin care products the week prior to the treatment will help to make sure that the skin is in good condition to heal properly. If you’re having Fraxel on your face and you have a history of cold sores, then she also recommends starting a preventative medication the day of the treatment.

What to Expect During a Fraxel Treatment

Before we started the treatment, I had a topical anesthetic cream applied to my entire décolletage area. Since it was my chest, and not my face, I wasn’t as concerned about the pain level. I have had many lasers before including IPL and the numbing cream ensured I didn’t feel much at all. This was also the case with Fraxel, but I will say it definitely feels hot and prickly during the treatment. I had my entire chest and both arms treated with the Fraxel laser at the same time and they were quite red post-treatment, but the treatment wasn't any more painful than a fresh sunburn. In general, Fraxel is more painful than other lasers, so if you do still feel it after the topical anesthetic cream, then Samolitis says you can also opt for a mild sedation and/or injectable anesthesia. I had the latter when I tried lip filler for the first time and it definitely worked.

After the redness cooled down (be careful to have lukewarm showers, as hot water will sting), my skin started to develop tiny brown, raised, bumps where the laser had been. You could actually see the imprint of the laser on the skin. But this wasn’t painful at all. In fact, the sunburned feeling dissipates after a few hours. It doesn’t look very pleasant though, so I opted for a long-sleeved turtleneck to cover it up. Thankfully, I had the treatment in the cooler months (which is actually recommended to avoid any sun exposure) so it didn’t seem unusual to be wearing a long sleeved, high-neck top.

As it starts to heal, your skin will feel scaly and itchy, but resist the urge to scratch or scrub it off. I know how hard this is, believe me—there were times in the shower when I wanted to use the loofah to scrub it all away, but you don’t want the new pink skin underneath to be exposed too early. Just let it come off in its own time. Since the Fraxel has created a controlled wound that needs to heal, the skin is much more sensitive to acne breakouts and allergic reactions. Common anti-aging ingredients and even essential oils can cause too much irritation, so be mindful of the products you use to treat it. Samolitis recommends gentle, water-based skincare products during the recovery period to keep the area hydrated and soft.

While the healing time can vary greatly depending on the type of laser used, strength of treatment, and area of the body treated, you can expect at least a week of downtime. Samolitis typically recommends avoiding major social activities and avoiding the sun completely for at least a week when the skin is at its most red and peeling; however, complete healing can take up to two weeks in some cases. It’s not painful for this period, but it does look a little scaly and flaky.

My chest had a lot of stubborn sun damage. The pigmentation was deeper, so I needed three rounds of Fraxel to achieve the result I wanted (that being a clear, smooth décolletage). However, you can expect to see visible results with just one treatment. Since the Fraxel laser is treating a fraction of the skin, Samolotis says it can take up to three to four treatments to reach a benefit comparable to traditional resurfacing lasers or deep peels.

During my consultation, Samolitis explained that this laser is predictable and safe, but you should always make sure that the procedure is administered by someone who understands how to tailor the treatment settings to your specific skin type and needs. “It is not a ‘one size fits all’ treatment and serious complications such as burning, scarring, and permanent discoloration can occur in the wrong hands or with poor aftercare,” she tells me. This is also why I had three treatments. Samolitis went a little lighter on the laser the first time around to see how my skin would react and recover, then she slowly ramped it up each time thereafter with a stronger treatment, knowing that my skin could handle it.

I am really, really happy with my results. My chest is smoother, firmer, and clearer with a more even skin tone than before, which is the result I was hoping for. But now I need to take incredibly good care of it. The skin is so new and fresh, which means daily sunscreen application (yes, even when it’s cloudy or cold outside). I have also been using a brightening serum to keep the pigmentation at bay and fade any new spots that start to appear. Taking care of pigmentation or melasma is all about management and a regular skincare regime of brightening products to keep it under control. I am currently using Skinmedica’s Lytera 2.0, which is one of my all-time favorites and I have seen it work wonders for reducing and preventing spots on my face, too. 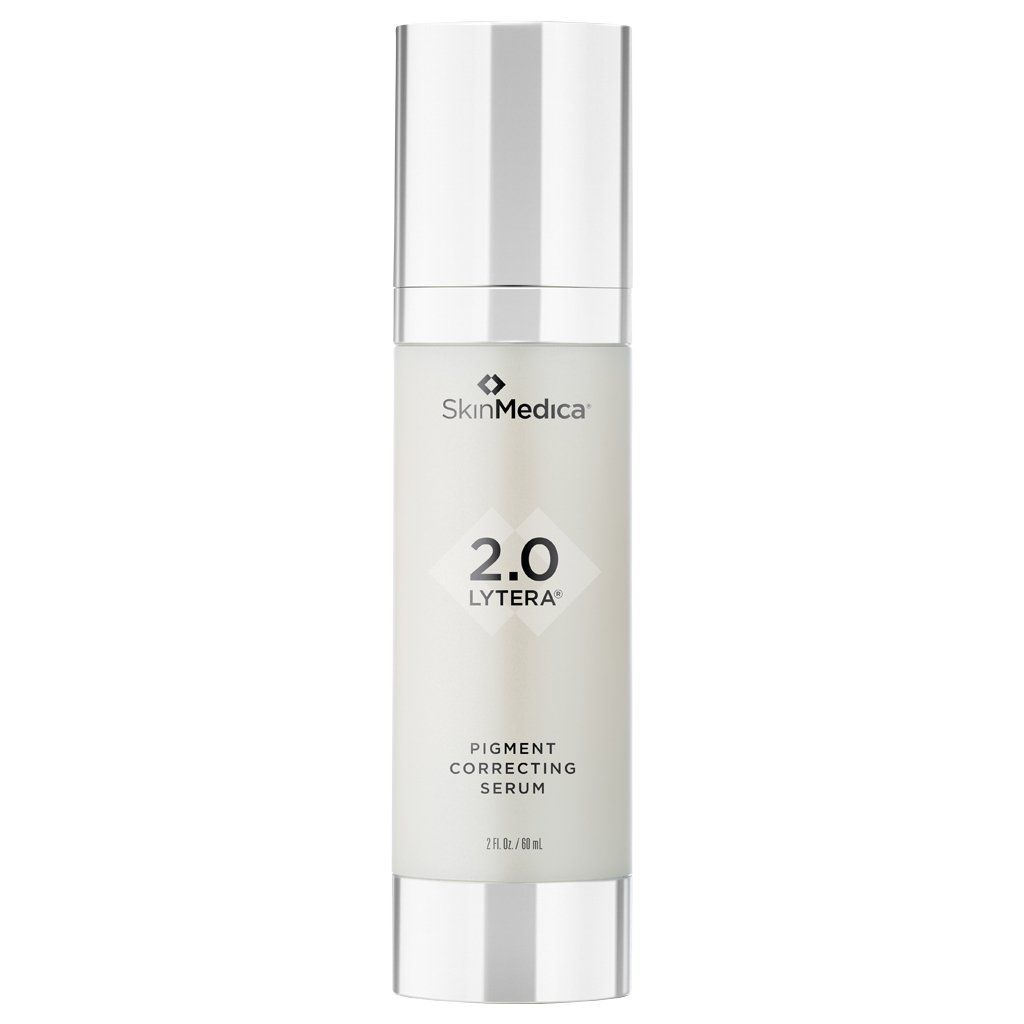