Wearing 13-Inch Extensions Taught Me More About Myself Than Therapy 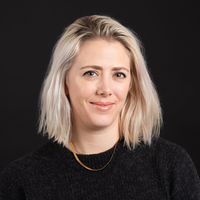 Elspeth Velten
Elspeth Velten is the former editorial director for Dotdash's Beauty & Style Group. Elspeth has worked in the lifestyle space for nine years, and has been with Dotdash since 2016.
Byrdie's Editorial Guidelines

Celebrity hairstylist Chris Appleton hung up from a call with JLo as I walked into the SoHo Glam Seamless studios in February. OK, fine... I can’t confirm that he dropped a call with Jennifer Lopez to address me, but what I do know for sure is that Appleton gave JLo voluminous waves on Super Bowl Sunday, appeared in a meme with her that made internet history, and then left her in Miami to catch a flight to New York and install extensions on Tuesday for me—a regular person with a very minimalist approach to—and, as I’d learn, some serious mental associations with—my hair.

I’m a blunt-cut, bleach-blonde bob by emotional nature and physical choice—an adult woman who feels like she’s found her style and swore she’d never have long hair again. “I can tell exactly who you are by what you’re wearing and what you look like,” Appleton assured me when I took the very first opportunity to tell him I was “chill” in hopes he wouldn’t give me some billowing style that would look right at home on JLo or Kim but absurd on me. “I just feel like you suit the rock and roll kind of vibe, I don’t want you to have a Barbie hairstyle,” Appleton said. It’s hard not to feel judged when someone who looks like the Paris filter in real life reads you in seconds flat. But also, I was relieved to be dealing with that level of instinct.

Appleton and the team at Glam Seamless (Appleton likes the brand because the extensions lay flat: “When you end up with a head shape that’s not your own, it’s not cute”) suggested I go the clip-in route. Clip-ins are really only meant for short-term wear (like, one day), but Chris said I could leave them in for a couple of days if I wanted to because he did them for me. He chose two platinum shades of the salon’s high-quality remy hair—one slightly cool and another lukewarm—to blend into my own hair. An hour, two packs of clip-in extensions and one perfectly filtered selfie with Chris Appleton later, I left the Glam Seamless salon with a “cool, grungy, sexy wet-ish look” (I looked amazing) and a new lease on life. Time to find out if long hair was really in the rear-view mirror forever.

This was party-girl hair, so I immediately confirmed my “maybe” plans for the night, which involved a pretty serious party at Saks 5th Avenue—my Super Bowl. I basked in my friends’ love for my new look, chugged champagne, took selfies in a bathroom, got a piercing, and ate mac and cheese in bed at midnight while my bewildered husband tried to sleep—the hair dictated, and I’d say I delivered.

But the next day at work, acknowledgment after acknowledgment of my suddenly-long hair filled me more with dread than adrenaline. I found myself feeling like I’d rather starve than walk to the kitchen. And I didn’t want to explain the dramatic change again in every meeting. Plus, were my clips showing? Though I’m typically extroverted, I suddenly didn’t want attention. And that deserved some analysis.

It turns out a theme exists in my hair history: I’ve chopped off my hair every time I’ve made a transition towards maturity in my life, including after dumping my high school boyfriend and subsequently becoming class president, and prior to making exciting career moves at work. I told Dr. Sanam Hafeez, PsyD about my history of haircuts in successful moments and she had some thoughts.

Sanam Hafeez is a licensed (neuro)psychologist practicing in Manhattan and Queens. Her topics of interest and contribution range from the effects of social media on brain function to ADHD, depression, and beauty and wellness and the role of psychological processes.

“There was this interchange of dumping a long-term boyfriend and cutting your hair—it was almost like ‘I don’t care what anyone thinks about how I look, I’m going to be louder and bolder and I’m going to speak my mind’ and that worked for you,” she said. “That’s an association you started making with short hair and I think there’s a symbiotic relationship between your own sense of self-worth and confidence and how you actually make things materialize.” It’s possible that I’ve just formed such strong associations between success and a short hairstyle that it’s ruined long hair for me forever.

Or, it’s possible that I’ve developed an instinct to downplay my femininity in order to be taken seriously in my work environment. “There’s a reason why a lot of female CEOs and politicians don’t have long hair,” Hafeez told me. “We’ve been taught, whether consciously or not, to be taken seriously in the workplace, even by other women, you have to come across somewhat polished and refined,” she said. “Traditionally, long hair lends this extra air of femininity.”

When I feel like I’m making an effort to hide a feature or pass as something else, I actually feel more exposed than ever.

And that really struck a nerve. Is my choice to keep my hair short based not only on just the ease of my morning routine but also on an attempt to temper my femininity? An assessment of my larger beauty routine reveals evidence in favor of this theory. Most of my routine is additive, not augmentative, meaning I’ll regularly swipe on a bright eyeshadow or toil over a winged liner, but rarely spend more than 30 seconds trying to cover my acne scars with little more than a sheer foundation. I almost make a point to ignore the parts of a makeup routine that could help me conform to the societal standards of beauty. Because when I feel like I’m making an effort to hide a feature or pass as something else, I actually feel more exposed than ever.

I made it through two days of work, one party and one gym session with my extensions in. So, is long hair truly in my past? My own natural long hair—probably. Though I don’t shy away from physical attention in real life (I wore Barbie Ferreira’s dominatrix look from Euphoria for Halloween, after all), I’ve learned I naturally lean away from that same physical attention, and my femininity, the second I enter the workplace. But the next time I want to be hit on by a bartender or a random person on the subway (both of those things happened to me with extensions), my Chris Appleton clip-ins are just an installation away.