The Revival of '90s Harajuku Fashion, According to the Photographer Who Lived It 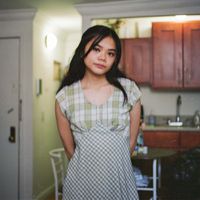 Kleigh Balugo
Kleigh is a Filipina journalist based in New York City. She is the co-founder and editor of online literary magazine, Kindergarten Mag.
Byrdie's Editorial Guidelines

There may be an age-old fashion rule that “less is more,” but according to Gen-Z, minimalism and the neutral color palette are a thing of the past. In 2022, rejecting conventional style rules is the status quo. And of course in true maximalist fashion, more is more.

Gen Z is showing a fearlessness to experiment and pile on different pieces all in a single outfit. This bright and clashing style, sometimes referred to as the “weird girl aesthetic,” may have recently graced your TikTok For You Page, but it’s far from new.

Although the internet’s most beloved brands like Heaven by Marc Jacobs and Unif channel this aesthetic, they aren’t the first of their kind. Synonymous with cute graphics, colorful knits, clashing patterns, fuzzy accessories, leg warmers, and beaded charms, many of the microtrends belonging to the weird girl aesthetic are actually a reference to 90s street style in Harajuku, Japan.

One constant you’ll see in all of the weird girl Pinterest mood boards and TikTok styling videos is FRUiTS magazine, a Japanese street style magazine started in 1997 by photographer Shoichi Aoki. Through FRUiTS, Aoki set out to document what the youth of Harajuku were actually wearing. From his photos, he noticed the blending of different Japanese subcultures and how it seemed to birth a brand new eclectic style, unlike anything that was being sold to teens at the time.

“Street fashion is always changing, especially in Harajuku. When I started FRUiTS, it was a very special period of time. It was like the Cambrian explosion after mass extinction. It was a fashion revolution in Japan,” Aoki told Byrdie. After becoming an inspiration to a brand new generation, Aoki said he plans to revive FRUiTS magazine by making a digital museum of his photos.

It may not be the '90s anymore, but FRUiTS-esque style is here to stay. Shuang Bright, or @xiaolongbby on Instagram, has looked to FRUiTS for fashion inspiration since middle school. “I thought it was the coolest book ever," she says. "I'm 26, so when I was growing up, there weren't a lot of depictions of Asian people."

The emphasis on individuality is what makes this aesthetic stand out from other trends. Rather than following a strict formula, maximalism allows you to experiment and express yourself through your own personal style, just as the subjects of FRUiTS did decades ago. Bright told Byrdie that the mixing of patterns and colors in FRUiTS inspires her to be more daring with her clothes. “I love bright patterns and textures," she shares. "I think it's just so playful and a fun way to express yourself. I don't think there's such a thing as too much honestly, as long as you're having fun."

Despite what the word “maximalism” implies, sustainability plays a big part. While other aesthetics may harp on designer brands or overly-trendy fast fashion pieces, the maximalist trend makes use of the clothes you already own. “I certainly don't think maximalism is exclusive to only rich or skinny individuals. I think it's the most inclusive trend of them all," says Bright. "You can rewear pieces of clothing from your closet. You don't need to only buy high-end name brand items."

When it comes to layering clothes and accessories, the possibilities are endless. Samantha Voong or @vryswagsam on TikTok, began posting styling videos inspired by FRUiTS after she had been following the magazine. “I would go on Pinterest and Tumblr and a lot of the pictures of the magazines would pop up," she says. "I felt very inspired by people who would just go out there and just dress how they want and not be afraid of what people think."

FRUiTS championed that same maximalist style that we see on TikTok today. So of course, no “weird girl” Pinterest board is complete without photos pulled directly from FRUiTS. In the photos, young people stare into Aoki’s lens. They wear plaid skirts, rainbow hair clips, neon tights, chunky platform shoes, and leather jackets. The clothes they’ve picked hang on their bodies proudly, just as their photos hang in the brains of all Gen Z-ers hoping to emulate their style.

Voong told Byrdie her personal style references other Japanese subcultures like visual kei and punk aesthetics. Thankfully, because of how busy the maximalist style is, she never has to choose just one.

But, the mixing of different subcultures and styles isn’t for the faint-hearted. Maximalism thrives on out-of-the-box combinations, which has sparked a lot of passionate debates on social media. Whether people love it or hate it, though, maximalists will always stick out in a crowd.