This Metabolism-Boosting Natural Supplement Is the Anti-Diet Pill

written by
Lindsey Metrus
Lindsey Metrus is the editorial project director at Byrdie and has been with the brand since 2015. Her work also appears in BuzzFeed, StyleCaster, and Yahoo.
Byrdie's Editorial Guidelines
Lindsey Metrus
Reviewed by
Brooke Alpert
Brooke Alpert, M.S., R.D., C.D.N. is a nationally recognized nutrition expert, holistic cannabis practitioner, and best-selling author.
About Byrdie's Beauty & Wellness Board
Brooke Alpert
Nutritionist

Meratrim: What Is It? Studies and Findings An Expert's Opinion
Real-World Testing and Results Final Thoughts

If you were born before, say, 1999, you probably remember the incessant weight-loss commercials featuring Anna Nicole Smith prancing around seductively in a short, silky robe, looking head-on into the camera, happily shouting, "TrimSpa, baby!" Piggybacking off of these were ads for Alli, then SlimQuick—they all had the same hypothesis: Take a pill, be insanely skinny and sexy. It's that easy! The women featured in these commercials were of the same mentality: happier, slimmer, sexier—and you, too, could be just like them if you purchased the bottle they touted in their much smaller dress size. Ah, the aughts were simple times, weren't they?

The problem is that pills like TrimSpa are loaded with caffeine—40% to be exact, and a hefty dose of chromium, an alleged weight-loss agent that's been debunked. Alli's key ingredient is orlistat, an OTC medication that reportedly causes sudden diarrhea.﻿﻿ The sex appeal of these pills is lost in their side effects. Which begs the question: Are diet pills worth the (possibly literal) headache?

Meratrim: What Is It?

Recently, I learned about a natural weight-loss supplement called Meratrim. It's a blend of fruit and flower extracts (Sphaeranthus indicus flowerheads and Garcinia mangostana fruit rind) that prevent fat cells from multiplying and help fat cells burn stored fat when you eat a healthy 2000 calorie diet (think balanced meals—it obviously won't work if you eat 2000 calories of cheeseburgers and cupcakes) and regular physical activity. The primary effect of the pill is a reduction in body weight, while the secondary outcome is a reduction in waist and hip measurements. One capsule should be taken twice daily, 30 minutes before meals. 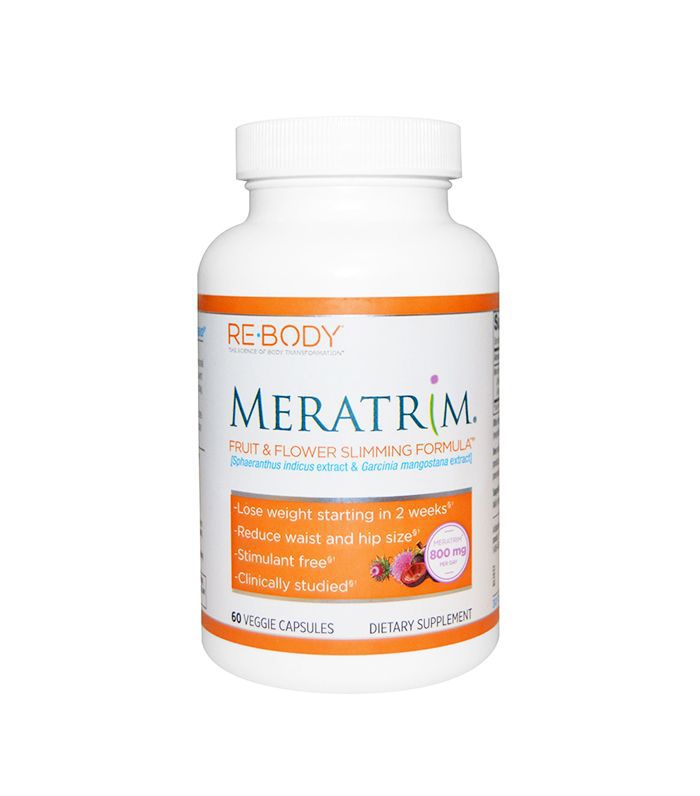 In one double-blind clinical trial, 95 obese participants were separated into two groups: one received placebo pills while the other received Meratrim twice daily. All subjects received 2000 calories a day in the form of three meals and walked five days a week for 30 minutes. At the end of the eight-week study, the Meratrim group lost around 11 pounds total and saw significant decreases in their BMI, waist, and hip circumference as compared to the placebo group (see the graph below).﻿﻿

In a similar study, 57 overweight middle-aged subjects were split into two groups (placebo and Meratrim) and also followed a 2000 calorie/day diet and walked 30 minutes, five days a week while taking Meratrim twice daily. At the end of the 16-week study, the group who took Meratrim lost an average of 11 pounds, which was significantly higher than the placebo group. The study showed that very few adverse effects came out of using Meratrim (17% experienced gastrointestinal side effects like nausea or acidity).﻿﻿

While the results of these studies sound incredible, I decided to check with an unaffiliated nutritionist for her thoughts. Brooke Alpert, RD, says first and foremost that she wouldn't consider Meratrim a typical "diet pill," but rather a "nutritional supplement": "There's no caffeine, no stimulants, and it's gluten-free, so it's completely safe. Obviously, if you have any health conditions or concerns, I'd recommend you check with your doctor before starting any supplement or diet plan."

When I asked her about the 2000 calorie diet, quite simply, it's just a matter of being healthy, because no supplement is enough of a miracle worker to counteract a fast-food meal plan. Alpert recommends a diet loaded with protein, fresh fruit and veggies, and grains.

After reading the studies, my biggest question was what would happen after you stopped taking the supplement because surely you wouldn't take it for the rest of your life. However, I wondered, if you quit cold turkey, would that mean you'd put all the weight back on? Alpert's answer: "As long as you continue with the diet and exercise plan, you should be fine."

Excited by the prospect of this supplement, I chatted about it with my boyfriend and mom, both of whom have complained about stubborn weight gain. My boyfriend took it first, and I kid you not, his co-worker who hadn't seen him in a week or so was taken aback when they reconnected and asked if he'd lost a lot of weight recently. I even found myself doing a double-take when he'd walk into the apartment. In total, he lost around eight pounds in three weeks. His diet was fairly healthy—chicken salads for lunch and dinner, but he still enjoyed himself on the weekends with a few slices of pizza and beers here and there (Alpert says there are no concerns with drinking alcohol while on the supplement). And living in New York City, he certainly got his 30 minutes of walking every day.

My mom lost around five pounds in the first few weeks of taking it (men always lose more, don't they?), but I have a sneaking suspicion she hasn't been sticking to a healthy diet (she's a big carb and cookie fan). However, she often walks during her lunch break, which is proof that the supplement really, well, supplements walking, because on any given week when she wasn't taking Meratrim but still walking, she hadn't shed those extra pounds.

While there's a stigma with taking a weight-loss supplement, I see Meratrim as an opportunity. Especially after evaluating the research and seeing it work for my loved ones, I feel compelled to give it a try (I'm in a weight-loss plateau myself). Alpert, someone who's extensively studied nutrition, also sees past the stigma, saying, "We take ibuprofen when we have headaches and put ice on a bump on our head, so I see no problem with being smart and taking a scientifically proven nutritional supplement that can help you achieve your nutrition goals." Roger that.