Contouring, imma let you finish, but highlighter is the best beauty product of all time. Whether it’s Pat McGrath’s internet-breaking Skin Fetish 003, Becca’s new Jaclyn Hill launch, or a whole slew of products still in the pipeline launching later this summer, it seems obvious that 2016 is indeed the year of the highlighter. And why are we surprised? A sweep of light-reflecting, exquisite powder (or cream) is the easiest way to fake a well-rested “I’m an angel sent from above” look (otherwise known as “the Gigi Hadid”) and, unlike contouring, it requires little to no makeup prowess to execute. Plus, it takes all of 10 seconds… with the right product. Too shimmery, and you look like a baby prostitute. Too matte, and it looks caked on and way too obvious—like clown contouring without the final blending step.

Today, I’m proclaiming my love for one particular, perfect version that is neither of the above: Urban Decay’s Afterglow 8-Hour Powder Highlighter($26). All three shades in the line are spectacular, but Aura—the purple-tinged, iridescent one—is the queen bee, the star; the others are just its little workers (sorry, Mean Girls quotes are just so applicable to daily life). So what makes it so special? Why has it caused me to pledge my life (or at least, makeup brushes) to it for eternity? You’ll find out ahead.

Keep scrolling to find out why this is the highlighter to end all highlighters.

I’m a human being, and therefore, I like when people tell me nice things about myself. You can call me shallow or materialistic, but I prefer to think of it as gathering field data for future use. Oh, this Zara shirt earned me tons of compliments? I’ll wear it next time I have a meeting and need a confidence boost—and maybe not spend 10 times as much on a similar-looking Theory blouse. See? It’s all very practical. But back to highlighters. I received the Urban Decay highlighter on a recent trip I took with the brand to Coachella, but didn’t use it until a few weeks later. It was around the time when Pat McGrath’s Skin Fetish 003 came out and stirred everyone into a frenzy with its “aliengelic,” multi-faceted glow-giving powers (I reviewed it on video here). A few days later as I was getting ready for work, I noticed that the UD highlighter in Aura had a similar purple-pink, soft iridescence as Pat McGrath’s version, and casually decided to dust it on my cheekbones.

That afternoon, our social media editor Olivia Collins stopped me in the hallway. “Are you wearing Pat McGrath?” she said, smiling knowingly. “No, actually,” I replied breezily. “It’s this new Urban Decay highlighter called Afterglow.” Little did I know that I would repeat this phrase at least once or twice a day to various co-workers and friends (and even my boss) for the next week. Most people wanted to know if I was wearing the Pat McGrath, but others simply told me, “Whatever you’re wearing on your cheeks looks really good.”

The thing that sets Aura apart from the other highlighters in my collection—and indeed, it is a vast collection—is the unique color. In the pan, it looks pale pink with a purple tinge. On the cheeks, it transforms into an otherworldly, iridescent, soft-focus filter that reflects light from every angle. I use it on top of my usual blush and blend it in to amp up the iridescence, but you can easily use it alone for a more subtle effect. I have yellow undertones to my skin, and I was pleasantly surprised that the pinky-purple formula was still flattering on me—so no, you don’t have to have porcelain skin with pink undertones to pull this shade off. If you’re totally wary of shimmer, this probably isn’t the product for you—you’re better off trying a more subtle cream highlighter, like W3ll People’s Bio Brightener ($29), which is another one of my favorites and gives more of a sheen than shimmer.

And if you prefer a more golden glow of the J.Lo variety, I recommend you try the Fireball shade. It’s a peachy color similar to Nars Orgasm, but much more subtle on the shimmer scale. The soft, sheer powder formula blends easily, and also builds easily—I find that just one or two sweeps above the cheekbones suffices for daytime wear, and usually I replace my blush with it. I haven’t tried Sin, the champagne shade, but imagine it’s just as silky and luxurious.

Suffice to say, this highlighter has changed my life (or is it just my ego?), and all my previous loves have fallen to the wayside. I still dabble with my cream versions on occasions, and I’ll never, ever give up my Charlotte Tilbury Filmstar Bronze & Glow ($68), but for now, I’m using Aura and letting the compliments roll in. I’d highly recommend any of the shades in the line if you’re looking for a Gigi-worthy glow, and the soft powder formula makes it practically mistake-proof—just sweep above your cheekbones, across your forehead, and down the bridge of your nose with a soft flat brush to shine bright like a diamond.

And here's another photo of myself wearing Aura, because like I said: My ego is insane right now.

Keep scrolling to shop this otherworldly highlighter below! 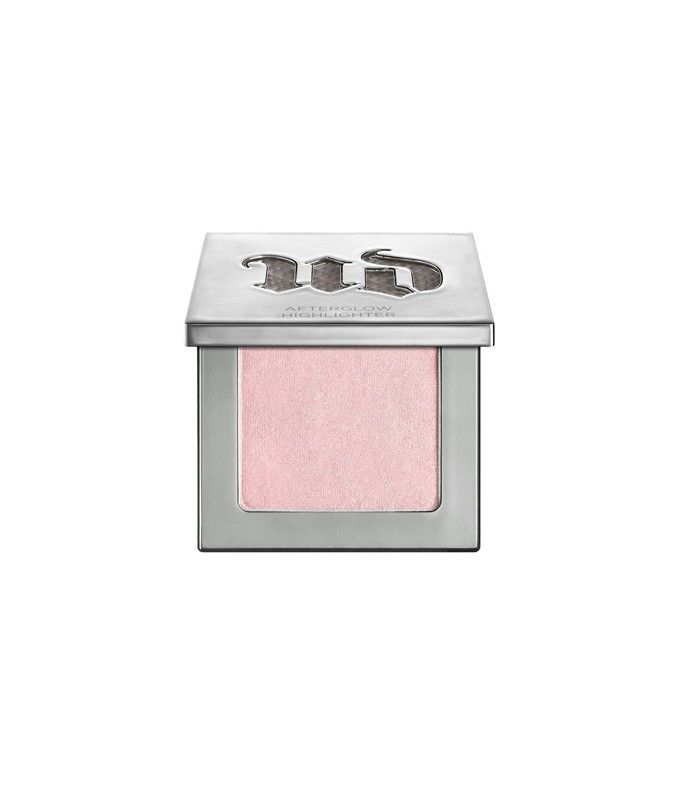 What’s your favorite highlighter? Tell me below!