Are Upcycled Snacks Having Any Impact On Food Waste?

The data is surprising.

You may have noticed the new buzzword "upcycled" floating around on packaged snacks and wondered what it meant. Upcycled foods are products made with ingredients that you would otherwise throw away. Think of the pulp leftover from making fruit and vegetable juice, or produce that isn’t attractive enough to be sold in grocery stores as a few examples.

Products made with ingredients that would otherwise be tossed into landfills often make some pretty big claims. They say they’re helping the environment by reducing food waste and creating products with less power, water, and other carbon-heavy resources. But are these claims true? In short: yes. Upcycled snacks are the easiest way you and I can help save our planet as consumers. To find out more about the impact upcycled snacks are having on food waste, I analyzed statistics from multiple upcycled snack companies and spoke with experts to learn more.

You know a movement is gaining steam when it has an official organization backing it. The Upcycled Foods Association was created in 2019 by two founders and numerous upcycled food companies. "According to food AI company, Spoonshot, interest in upcycling grew by 128% across business media in the past year," Graham says. "The upcycled industry has been projected by Whole Foods and others to be a major trend."

Importantly, the movement to use food ingredients that would otherwise be thrown out isn’t limited solely to food products. Graham says upcycled foods are being used in a much wider variety of consumer goods, including beverages, cosmetics, pet food, personal care products, and home cleaners. The Upcycled Foods Association offers its own certification program for brands that want the upcycled credential on their packaging. "The new Upcycled Certification program recently launched and will highlight to consumers the hundreds of upcycled products already on the market," Graham explains. "The Beta Program launched in February and had 16 participants. Eight of the brands have received the certification successfully, and we expect all of them to complete the process."

How much of an impact are upcycled snacks having on food waste? There are a few surprising statistics.

"In 2020, we diverted 100,000 lbs of food waste from plant-based milk, and because we sell bulk ingredients as well as final CPG products, 100% of that was turned into products sold," co-founder and COO of Renewal Mill Caroline Cotto says. "This year, we're on track to do $1M in total revenue across our B2B ingredient business and our B2C CPG products business."

Pulp Pantry founder Kaitlin Mogentale says her business has made a substantial impact as well. "Last year, we recovered over 50k lbs of food," she notes. "This year, we're on track to double that number." They saved 38,000 pounds of produce pulp from Suja Cold Pressed Juice alone. They’ve also saved 9,000,000 liters of water and 248,000 square feet of cropland.

As the upcycled food movement grows, more money is being put into it by large corporations. "Anheuser-Busch invested 100 million dollars into a huge facility that turns the remnants of barley from brewing into protein and fiber supplements for UFA member company EverGrain," Graham says. "As part of an initiative of its Zero Hunger | Zero Waste Foundation, Kroger Co. collaborated with investor Village Capital to provide ten food entrepreneurs specializing in upcycled foods with $100,000 each in seed grant funding."

For the sake of due diligence (and because who doesn’t love snacks), I tried as many upcycled snacks as sounded delicious to me. It’s worth noting that there are many more in existence, but some didn’t call out to me as ones that would add joy to my day. These were my favorites, and are all products that I would gladly purchase even if they didn’t have the fabulous added bonus of planetary wellness. 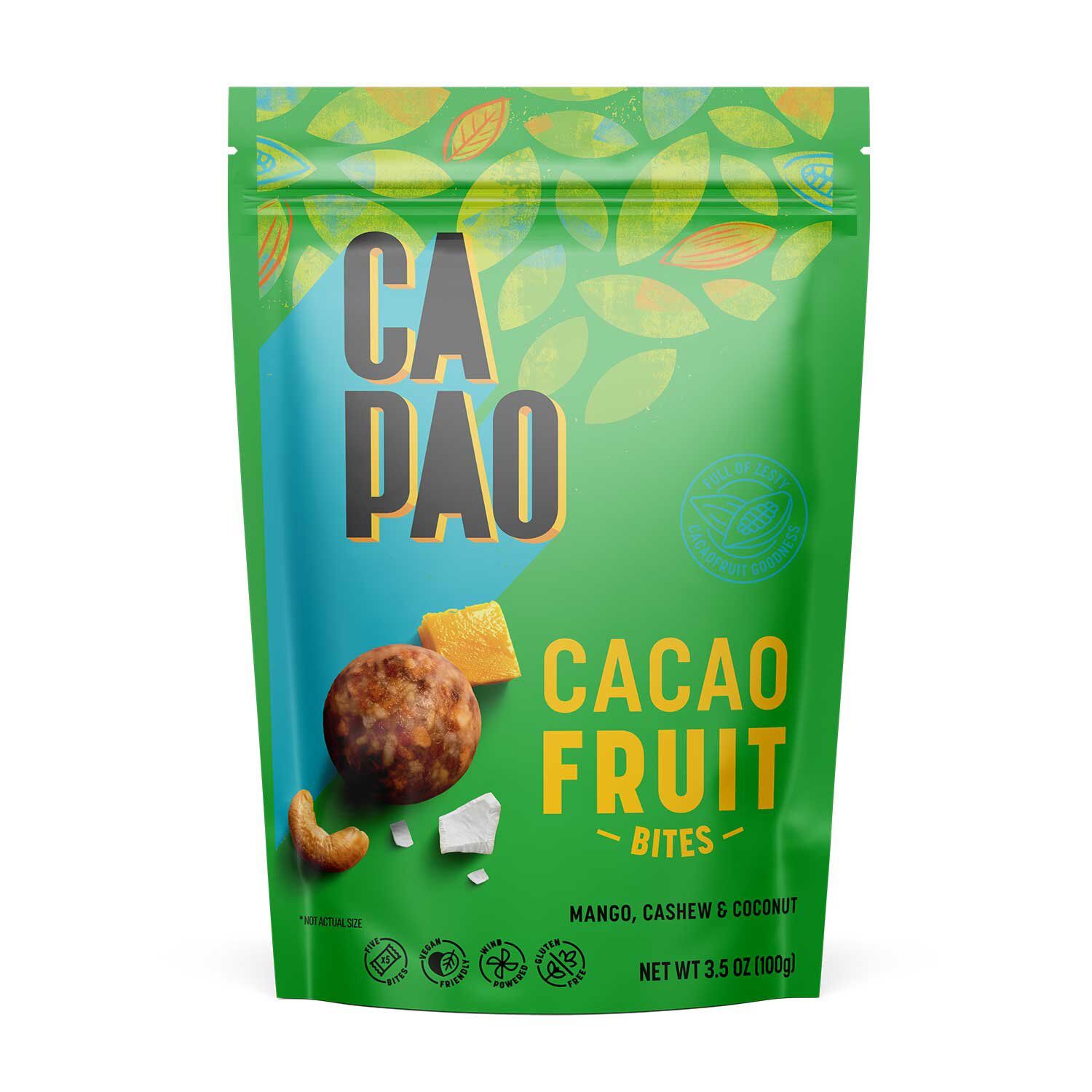 If you’ve never thought about what happens to the rest of the cacao fruit besides the beans we make into chocolate, you’re not alone. I can’t say I’d ever given it much headspace, and I’m an avid fan of the stuff. But after speaking with CaPao's brand lead Shannon Neumann, I learned a lot.

"According to Sylvie Woltering-Valat at Barry Callebaut (which supplies cacao fruit to CaPao), an estimated 14 million tons of cacao fruits are harvested around the world each year to craft chocolate," Neumann says. "Because only the seeds of the cacao fruit are used (70% of the fruit is discarded as waste), this means that 10 million tons of fruit are wasted each year."

What’s the environmental impact of that? "Upcycling the cacao fruit can reduce the same amount of CO2 as planting 3.5 billion trees a year," Neumann tells me. "That's an area of forest bigger than Germany and France combined." As if that wasn’t impactful enough, the brand’s production facilities are 100% wind-powered.

CaPao takes leftover cacao fruit and turns it into fruit and nut bites. I’m a fan of that type of snack in general, but there is something particularly silky and creamy about these bites. They come in flavors like mango, cashew, coconut and cherry, almond, and cocoa. I found them to be an energizing, healthful feeling treat. The grab-and-go packaging was an added bonus, too. 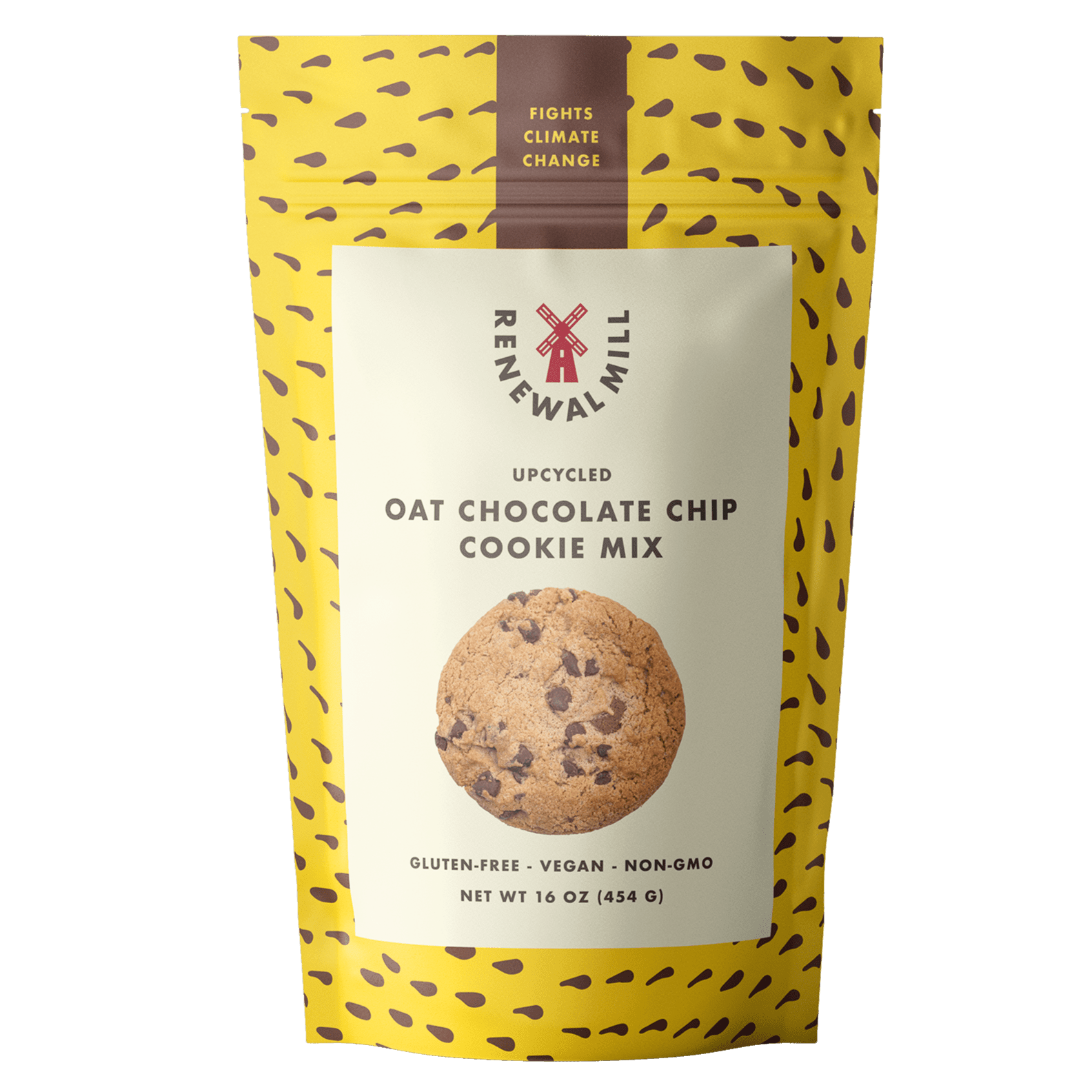 Named a "world-changing idea" by Fast Company, this brand takes the byproducts from the making of plant-based milk and turns them into high fiber, gluten-free flour. They sell the flours solo, as well as baking mixes and goodies made with them. As if this wasn’t a sufficient amount of do-gooding, even their packaging has a positive environmental impact. On their site, the brand writes, "We're proud to be certified plastic negative—that means we remove twice as much plastic from the environment as we use for our packaging."

Most notably, Renewal Mill turns the leftovers from soy milk production into a product called okara flour, which has a whopping amount of protein and fiber: seven grams and twenty grams per half cup, respectively. The addition of that flour into standard baked goods can help improve their macronutrient profiles to an impressive degree.

When you taste their vegan chocolate chip cookies, you’d have no idea that they weren’t just a standard wheat flour dessert. The cookies had everything I look for in a chocolate chip treat: they were soft, chewy, just sweet enough, and contained plenty of rich Guittard chocolate chips. 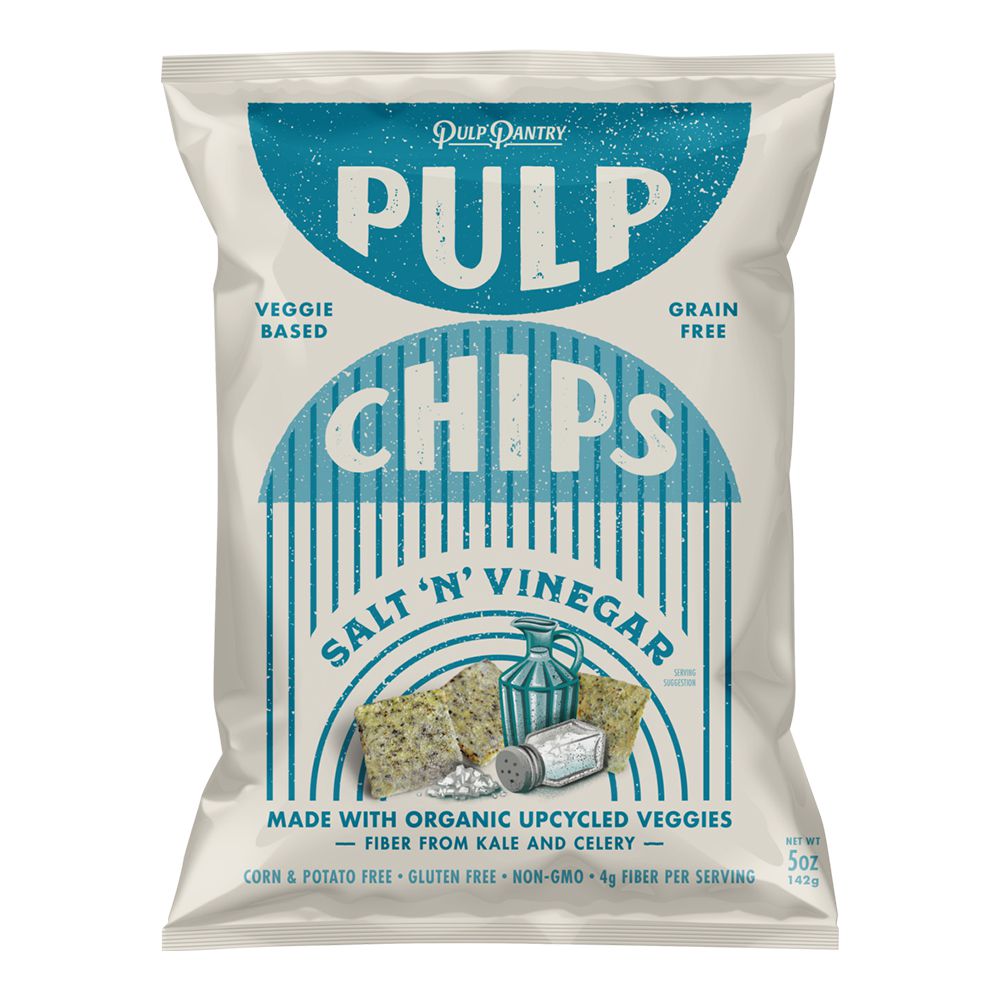 Ever wondered what happens to the rest of the fruits and veggies after they get juiced? This brand did and then went on a mission to turn leftover produce pulp into everything from cereal to chips.

When I was offered chips made with the leftover produce pulp from juicing, I was a bit skeptical. During my raw food days, I used to make veggie burgers out of that pulp, and it was never a meal that my stomach thanked me for later. Luckily, Pulp Pantry turns produce pulp into crunchy, high fiber, satiating chips that were as easy to digest as they were to snack on.

Available in flavors we know and love like barbecue and salt and vinegar, swapping out your usual chip for these healthier and more sustainable ones is an easy project. Because they’re so high in fiber, they’re far more filling than potato or tortilla chips, meaning you’re also likely to eat them more slowly, and hence, more mindfully.

The Future Is Sustainable

In the United States alone, 108 billion pounds of food are thrown away annually, which is valued at 161 billion dollars. According to Feeding America, "food goes to waste at every stage of food production and distribution—from farmers to packers and shippers, from manufacturers to retailers to our homes." Choosing upcycled foods can lower this number, helping to also reduce the environmental impact of growing foods that are then put in overflowing landfills. I can’t recommend trying this type of snack highly enough; the benefits are huge for your health and the health of our planet.

Are Dehydrated Snacks The Future Of Food Sustainability? Experts Weigh In