Piercing 101: Everything You Need to Know About Tragus Piercings

If you're looking for a new accessory, you may want to consider an ear piercing (or two). The curated ear has been trending among cool-girls and celebrities alike, and for good reason. Whether you're shopping for something subtle or edgy, there are plenty of options to choose from.

One of our favorites is the tragus piercing, which "In terms of history, [is] quite new, probably first seen around the 1980s," says piercing expert Jasmine Howell. Still, the tragus continues to be a popular choice as far as ear piercings go. Celebrities from Zoë Kravitz to Rihanna to Scarlett Johansson have all been seen sporting an adorned tragus. Keep scrolling to find out more about getting a tragus piercing, including the pain level, healing time, and cost.

Placement: The small piece of cartilage over the entrance to the ear canal

Aftercare: Clean twice a day with a sterile, saline-based solution. Avoid putting pressure on the area by not sleeping on the side with the earring until it heals.﻿﻿

What is a Tragus Piercing?

A tragus piercing sits on the small area of cartilage that partially covers your ear canal. In terms of anatomy, the outer ear is made up of cartilage and skin. While the fleshy lobe remains the preferred choice among traditionalists looking to get pierced, areas of cartilage, like the tragus, may entice those interested in something slightly different, or in addition to, their already pierced lobe. According to Howell, "As piercers, we’re looking for a small flat area that will support being pierced. Provided your ear is suitable, [tragus piercings] look great on pretty much everyone."

You may have also heard of a surface tragus piercing, which is placed in the same area as the tragus piercing, except rather than puncturing the cartilage, just the skin is pierced. However, because the jewelry lies beneath the skin, there may be a higher probability of the body rejecting it, deeming it a foreign object that needs to be pushed out.﻿﻿

Sure, pain is relative—to a point. Generally speaking, how much does a tragus piercing hurt? Howell says, "Most cartilage piercings to me feel like pressure rather than pain. For example, I’ve had both a tragus and helix piercing done, and I wouldn’t say one was more painful than the other. Although, people are sensitive in different areas, so the amount of pain you would feel will vary depending on the person." No pain, no gain, right?

While any ear cartilage piercing is tricky to heal, the tragus, in particular, gets in the way when talking on the phone, listening to earphones/earbuds, or using a Bluetooth earpiece. Germs are likely to be on those ear devices and will stunt your piercing's healing time. It's advisable to avoid anything from coming into direct contact with your tragus for at least a few weeks after getting pierced. "A lot of things will factor into the healing time of a piercing, but generally, we would say anywhere between six to 12 months," says Howell.

Cost of a Tragus Piercing

The price of a tragus piercing will depend on where you're getting it done, less for reasons that have to do with the act of piercing than for the piece of jewelry. The cost of tragus piercings typically falls within a range of $30 to $40. Howell elaborates, "Most inner ear cartilage piercings are roughly the same price. Jewelry choices vary, the only limitation being: How many diamonds?"

When considering getting any type of piercing, proper aftercare is paramount. After all, you don't want the excitement of your new earring to be overshadowed by said earring contracting an infection. In order to avoid such a scenario, Howell recommends, "cleaning your piercing twice a day with a sterile saline solution for the first two to three months. Avoid touching or moving the piercing—any excessive trauma or pressure will prolong the healing process. To put it simply, leave the piercing alone unless you’re cleaning it!"

Dr. Howard Sobel, founder of Sobel Skin and attending dermatologist at Lenox Hill Hospital in New York, says to avoid "soap, shampoo or any disinfectants for the first day." He also suggests turning the earring once per day during the healing process and applying polysporin to the area. "I would even consider not using earphones/earbuds for the first four to eight weeks after the piercing," he says.

Howell adds, "Applying any pressure onto the piercing while it’s healing will prolong the healing process. We would recommend not sleeping on it for the first couple of months. Travel pillows can come in handy to prevent pressure."

Since the tragus piercing might swell quite a bit more than other ear piercings, a ring would be much more challenging to heal, as it may not accommodate room for swelling. Instead, opt for a bar as your initial ear jewelry.

Side Effects of Piercing

How to Change Out a Tragus Piercing

Avoid removing the piercing until it's completely healed.﻿﻿ Before changing your tragus piercing (or any piercing, for that matter) be sure to wash your hands thoroughly with soap and water, and to clean the area regularly to disinfect and "avoid getting any bacteria in the area," says Sobel. He recommends cleansing the piercing itself with saline or a product like NeilMed Piercing Aftercare Wound Wash ($15).

The individual steps will depend on whether your earring is a stud, hoop, barbell, etc. When in doubt, most piercing salons will change out an earring for free.

What Type of Jewelry Is Used for Tragus Piercing? 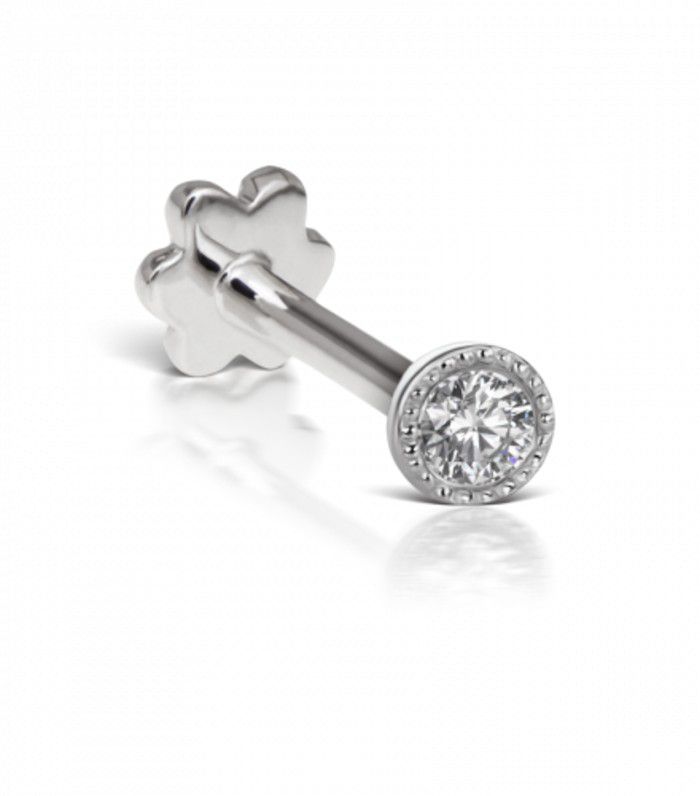 What Jewelry Material Is Used for Tragus Piercing?

Helix Piercing 101: We Reveal All You Need to Know
Article Sources
Byrdie takes every opportunity to use high-quality sources, including peer-reviewed studies, to support the facts within our articles. Read our editorial guidelines to learn more about how we keep our content accurate, reliable and trustworthy.