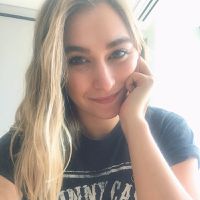 Loren Savini
Loren Savini is a journalist and editor based in Queens, NY. Her coverage of beauty, lifestyle, and culture has been featured in publications including Allure, Boston Magazine, The Washington Post, and more.
Byrdie's Editorial Guidelines
Medically reviewed by
Julia A. Siegel, MD

What It Is Causes Symptoms
Treatments Prevention The Final Takeaway

Scalps are like gardens: It takes a lot of watering, pruning, minding, and feeding to keep the results lush and healthy. It’s a delicate ecosystem. And while healthy plants are hardy, it's only to a point. If you pull anything by its roots—you risk damaging the plant and the soil.

The same goes for your hair and your scalp. A healthy scalp leads to strong hair, but repeated stress and pulling can damage the whole system. If you’re a devotee of braids, tight ponytails, or weaves—you may be noticing hair loss, or alopecia. Alopecia comes in many forms, but traction alopecia (Keyword: traction—referring to pulling) is specific to the stress of tight hairstyles. “Prolonged mechanical stress on hair can lead to permanent damage and loss of follicles,” says board-certified dermatologist Andy Goren, MD. Unfortunately, says Goren, once traction alopecia is noticeable, it’s irreversible.

Thankfully, that doesn’t mean you’re doomed to hair loss. If you catch traction alopecia early enough, you can prevent further damage. And if you’re already experiencing it, you still have a few options. To crack the case, we asked Goren, board-certified dermatologist Sheila Farhang, MD, and trichologist Zoe Passam how to identify traction alopecia and stop it in its tracks (no pun intended).

What Is Traction Alopecia?

“Traction alopecia is a type of hair loss which occurs as a result of repeated, prolonged pulling forces on the hair,” says Passam. “This places undue trauma on hair follicles, which, if sustained over a long period of time, can lead to permanent hair loss.”

When you pull tightly on your hair, the follicles become inflamed, damaged, and eventually scarred. “In the early phases, hair can grow back. However, chronic forms over several years can become scarring and that is permanent,” says Farhang.

What Are the Causes of Traction Alopecia?

Traction alopecia doesn’t happen overnight. It’s kind of like coastal erosion—it happens gradually. If you’re putting your hair into tight styles repeatedly over several years, you may start to notice your hair thinning and possibly not growing back.

Passam says she sees it most often in Black women that come to her clinic since tight hairstyles (like braids and cornrows) are often introduced in early childhood. Weaves, tight ponytails or buns, and wigs can also cause stress on hair follicles. “Others include those who pull their back in a bun daily—especially while the hair is wet,” says Farhang.

What Are the Symptoms of Traction Alopecia?

Hair loss is the number one—and potentially the most obvious—symptom of traction alopecia. “It’s most often seen at the hair margins, where pulling forces tend to be greatest, but it could occur anywhere depending on the hairstyle,” says Passam. “Typically recession of the frontal hairline will occur, and sometimes the hair loss may be preceded by soreness, itching, and bumps on the scalp,” she adds. Take those symptoms—the soreness and irritation—as warning signs that traction alopecia could occur and jump right into prevention.

It’s also usually fairly easy to tell traction alopecia apart from another form of hair loss. If you’re losing hair but don’t have a history of wearing it in tight styles, you probably don’t have traction alopecia. You’ll want to see a dermatologist as soon as possible about other causes.

How to Avoid Traction Alopecia

To avoid traction alopecia, you’ll want to rethink any tight styles (or at least give your scalp a break from those styles now and again). “Traction alopecia is most frequently induced by hair styling, so avoiding hairstyles that damage hair follicles such as ponytails, tight braiding, flat ironing, and hair extensions reduce the risk of developing traction alopecia,” says Goren.

“Avoiding chemical treatments, such as color and relaxers, will help to make the hair less susceptible to breakage, and therefore maintain as much hair length as possible,” Passam adds. “Maintaining a good diet, with plenty of protein, will also help to support healthy hair growth.”

How Traction Alopecia Can Be Treated

With traction alopecia, prevention is the name of the game. “It usually develops over several years and is often irreversible unless treated at an early stage,” says Goren. That’s why you want to treat your scalp as kindly as possible and stop the tight styling while you’re ahead. If your scalp is sore, now is a good time to give your hair a break.

If you’ve already lost hair, recovering it will be a bit harder, if not impossible. “The possibility of the hair recovering from traction alopecia depends very much on the time since the onset of the hair loss,” says Passam. “If this is more recent, it is possible that some recovery will be possible, but if it’s more long-standing, it is likely that scarring will have occurred in the follicle, which will therefore be unable to regrow a hair.”

Those in the later stages of traction alopecia can see a dermatologist about good ol’ fashioned topical minoxidil, which is the best bet (although not guaranteed) at regrowing some of the hair.

The good news? Wearing your hair in a tight ponytail once in a while will not cause permanent hair loss, and you’ll likely notice some soreness and irritation before you experience irreversible damage. If you avoid those styles or at least give your scalp a long, healthy break, you may be able to prevent traction alopecia and possibly even regrow some of your lost hair. “You want to see your dermatologist sooner than later,” says Farhang.

The bad news is that if you’re already experiencing hair loss from tight styles, you’ve likely scarred the follicle, meaning it may not grow back. At that point, your best option is to see a dermatologist about prescription topicals or steroids.