Welcome to Tynan Sinks' new fragrance column, Smells Like Trouble. As Byrdie's resident fragrance connoisseur, Tynan will be sharing the scents that linger on in his mind, and nose, and clothes. Today, he discusses Tom Ford's seductive new scent, Bitter Peach.

A fragrance is a statement of intent regarding who you are, or intend to be, as you spray it on. Like makeup, fragrance does not have to reflect who we are, but it can project who we see ourselves as. It can be a promise. It can be a hoax.

Tom Ford is known for serving his collections with a wink, a lot like Marc Jacobs, whose new fragrance we recently discussed. Though, where Marc Jacobs’s wink often feels self-deprecating—like he’s in on the joke and laughing at the absurdity of fashion itself—Tom Ford’s wink always feels salacious. Marc is smirking at what has happened; Tom is smirking at what’s about to.

Tom Ford has made a career out of being a provocateur, having ads banned throughout his tenure at Gucci and his namesake brand, proudly (if cringingly) describing himself as an “equal opportunity objectifier” of both men and women. More recently, Ford released fragrances with suggestive names like Lost Cherry, Fucking Fabulous, and Rose Prick. Like any great artist, he continues to find new ways to innovate, and new ways to shock with an audience that is always ready to be scandalized.

I do wonder why he chose to pivot from sexualized ads to fragrances that absolutely bleed with sex, but it makes sense if you think about it. Looking back at his ads that were banned, they’d barely move the needle now. Sex doesn’t sell like it used to. How can you excite an audience that has seen it all? Instead of making something outrageous for all the world to see, you make it a secret.

Fragrance is personal, but you knew that. We respond to the way something smells, yes, but we respond just as much to the shape of the bottle, the campaign, the emotions it evokes. We respond to the name. Tom Ford giving his scents spit-take inducing names is pretty genius because it’s something only you know. It’s between you and Tom. A secret for you to share, but only if you want to.

Before you even smell it, Bitter Peach is full of sex and spite and sticky fluids. It’s irresistible—a mess you know you’re going to have to clean up.

Bitter Peach hits your skin, half sweet, half tart. It’s like the memory of a peach, or a peach that’s all grown up. It’s not a fresh peach or Trolli gummy peach ring; it’s not literal or even candied. But it is bright, assertive, and anything but immature.

I hesitate to call it a “spiced peach” for fear of it veering into holiday territory, because it’s not that, either. It’s not a Bath & Body Works candle (no shade) as much as its juicy, fiery, and resinous. I kept falling back into it over and over again, lifting the cuff of my sweater to my nose every couple of hours (minutes) to take it in once more. 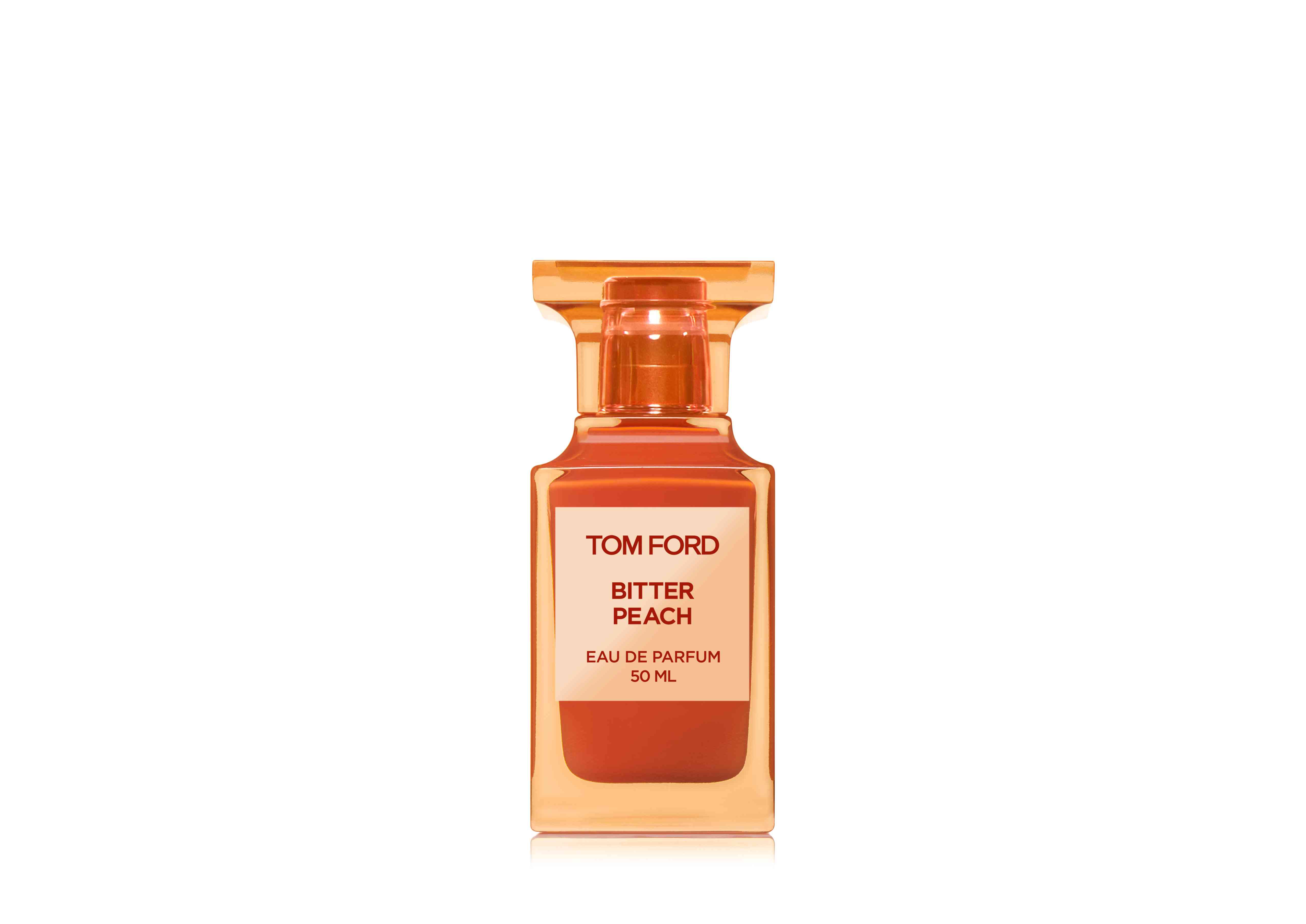 The scent opens with...peach—pause for reaction—accompanied by blood orange, which I think has a lot to do with the searing tang that you get off the rip, enhancing that balance of sweet and sour. There’s also a cardamom note at the top to immediately heat it up. Rum-infused davana oil makes the heart of the scent earthy and a little glassy, like eyes already glazed over. I’m usually repelled by rum in scents (and cocktails) but this one doesn’t read syrupy and boozy, it just makes for a heart that really expands on the idea of the peach. I wouldn’t have paired them, but it makes a lot of sense in practice. Bitter Peach is held down by a heavy, heady base, including patchouli, sandalwood, vetiver, cashmere, and vanilla, to name a few. It’s like the greatest hits of base notes all in one fragrance.

The fragrance is so nicely thought out. Whether you like it or not, there’s a real idea happening here. It takes you on a journey throughout wear, bright and assertive at the beginning, slowly wearing down to something warmer, more approachable. It’s a really exciting take on a “fall fragrance,” warm and woody, full of spice and earth, sweet but not familiar. But I think it would also be good in the hotter months, too, because this is definitely a hot fragrance.

It’s is a little cheeky, like a joke you shouldn’t have heard, or a person you shouldn’t have kissed. It’s sweet enough to draw you in but scandalous enough to make you wonder if it’s okay to want it. But the having is never the fun part—it's always the wanting, isn't it?

Bitter Peach keeps you guessing. One you think you’ve got it, it takes another turn. It will drive you crazy, but in the best of ways. It’s good, so be ready for people to ask you what scent you’re wearing, but it’s so good that you’re going to want to keep it a secret—all to yourself.