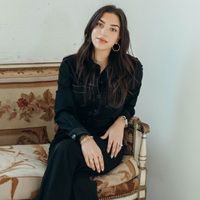 Gabriela Ulloa is a contributing writer for Byrdie. She has also written for Architectural Digest, The New York Times, Domino, and Cultured.

Early September was a week for music and no, I’m not talking about the Certified Lover Boy. After a few enticing Instagram teases, la Reina de Barcelona Rosalía dropped a new video alongside rapper Tokischa. It sent me down an internet rabbit hole that ultimately culminated in an obsession with the Dominican one-to-watch. From her unapologetic lyrics to her enviable confidence, Tokischa is unabashedly herself and, well, I’m a fan.

While my love for Latin music (specifically el género Urbano) runs deep, I really had no choice in the matter, being Cuban American and growing up in Miami. However, I was unfamiliar with Tokischa before hearing her now immediately recognizable flow on "Linda." Give me any reggaeton or reggaeton-adjacent sound and I’m here for it. Now, make it written and performed by a woman; game over.

The song, which I can only describe background music in my perreo dreams, brings forward so much more than a catchy hit. Sure, it’s definitely the new soundtrack to my life, but "Linda" also represents the full liberation of restricting norms synonymous with Latinx femininity.

Regardless of the progress made to diversify, mainstream media is primarily dominated by a very particular and idealized concept of what a Latinx woman should be: a bombshell with a perfect chest-to-waist-to-ass ratio equipped with digestible white-washed features, not too flaquita but not too gordita, not too white but definitely not too dark, and above all else always upholding the perfect niña fina persona. It’s no wonder this detrimental one-size-fits-all construct has left so many Latinx women wondering where they fit, if at all.

As an artist, Tokischa, intentionally or not, provokes us to question our discomfort with Latinx women straying away from cultural expectations.

As Latinas, we’re already boiled down to a monolith, now couple these beauty restrictions with moral and behavioral expectations, and we’re left with a system designed to shame the non-conformists and retain anyone else with the threat of being othered.

The church, for example, has played a large role in the maintenance of these sanctions. The social constructs that make up the moral fabric of the church are so tightly woven into the fabric of Latinidad that it becomes an almost impossible task to separate the two. Right is right and wrong is wrong and the space for a grey area, specifically for women, is quite frankly non-existent.

When Tokischa uploaded images of herself praying in front of an altar in the La Vega Province of the Dominican Republic while wearing a white lace bustier and nude underwear, it was no surprise the public spiraled. After facing legal repercussions incited by the Dominican government, the rapper stated the images represent that "anyone can pray, no matter where they’re from or what they represent."

Tokischa reminds us that sexuality, religion, and femininity are not mutually exclusive ideations but pieces of our complex identities.

It’s because of this that I was met with an overwhelming feeling of gratitude when I first watched the video for "Linda." As an artist, Tokischa, intentionally or not, provokes us to question our discomfort with Latinx women straying away from cultural expectations. From the opening scene featuring a trans woman in a beauty salon filled with double-take-worthy looks to Tokischa and Rosalía’s take-it-or-leave-it lyrics and attitude, the duo explores beauty, sexuality, and freedom through the lens of the uninhibited—dismantling boundaries put in place by a society rooted in misogyny.

Artists like Tokischa, who stand in their sexuality, sin pena, are actively moving the needle away from the male gaze and towards female liberation. In a world that is male-dominated and often rewards machismo, it’s been shown repeatedly the only acceptable sexualization of women is when it is being done by and for a man. When the goal of conforming to male-crafted ideals is removed, that’s where the problem begins. A woman taking ownership over her body has no place in a patriarchal system. And when she does so, what’s left is a potent scent of disapproval and anger, particularly for women of color who are already assumed by society to be less than.

Whether redefining the confines of masculinity and femininity is a threat to the system in place or accepting that we as a collective must confront our own micro-aggressions, the appeasement-tainted justification for the harassment and targeting of female artists like Tokischa is far from rare. None of us can forget the uproar and outpour of hatred with the release of Cardi B and Megan Thee Stallion's 2020 anthem WAP.

So, although we can chalk this all up to male-driven insecurity and fear, traversing through the nuanced weeds of Latinidad as an artist does not automatically become simpler. Tokischa reminds us that sexuality, religion, and femininity are not mutually exclusive ideations but pieces of our complex identities. And while the days of men being glorified for their displays of toxic masculinity are ever-present and realistically far from over, Tokischa brings a joyful sense of hope that encourages us to live proudly at our intersections.

Meet the Latinx Women Behind Some of Your Fave Beauty Brands