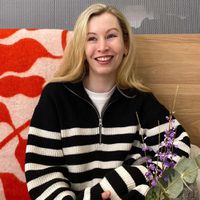 Bec Oakes
Bec is a freelance writer with over seven years experience. Her work has been featured in British Vogue, Refinery29, Stylist, and more.
Byrdie's Editorial Guidelines

It’s a Friday evening and I’m scrolling mindlessly through TikTok when I come across an ad by clothing brand Urban Gal. It’s strange. I’ve never heard of Urban Gal, but I’m certain I’ve seen the green swirl-print knit dress featured in the video before. I soon realize why. It’s an exact copy of House of Sunny’s viral Hockney dress, only being sold for less than half the price.

Across TikTok, there are endless dupes like this—products that are incredibly similar to another but being sold for a lower price—and “dupe culture” is exploding in popularity. Videos using #dupe have been viewed over 1.3 billion times, and an increasing number of users are proudly sharing the cheaper alternatives they’ve found for trending clothing items.

One example is lifestyle influencer Liz Lovery, who shares her “obsession” with buying Lululemon dupes in a video that has 4.2 million views and over 410,000 likes. She claims it’s “an obsession that doesn’t hurt anyone” and includes a link for her followers to buy the dupes on Amazon. Other videos feature dupes for everything from Gucci boots to Brandy Melville T-shirts.

Dupes are nothing new. They’ve existed for years under various names, including copies and knockoffs. But while we’ve always bought dupes, we were once a lot more discrete about it. Knockoffs were considered a major faux pas, and there was almost a sense of embarrassment around buying and wearing them.

The growing popularity of dupes on TikTok, on the other hand, presents a completely different attitude. Dupes are not only flaunted across the app, but creators who share their finds are praised for showing affordable alternatives. The dupes themselves are celebrated for their reasonable price tags, allowing everyone to have access to trending designs regardless of their budget.

The reason for this surge in the popularity of dupes seems to be a combination of two factors. To start, TikTok’s majority young demographic—Gen Z and millennials are the most avid users of the app—are less likely to have the disposable income to buy high-end products. On top of this, we are very trend-led when it comes to fashion, and, as the “social media generations,” are photographed at dizzying rates. If we were to buy high-end versions of every trend and microtrend that comes along, we’d run out of both money and outfits very quickly. Thus, we turn to less prestigious brands that offer inexpensive alternatives, forgoing quality and designer labels in favor of staying on top of trends and presenting the perfect image online.

To the young consumer who is both trend-driven and cost-conscious, dupes are an obvious choice. But social media’s fascination with dupe culture doesn’t come without its problems. After all, there’s an incredibly fine line between inspiration and plagiarism. It’s one thing to be inspired by a design; retailers have always gained inspiration from luxury brands. It’s another, however, to create an exact copy. Like the Urban Gal dress that showed up on my For You page, the dupes being shared on TikTok are often nearly identical to the original garments, and their constant promotion almost feels like a celebration of unchecked plagiarism.

Marie Dewet is the founder of MaisonCléo and has publicly spoken out against retailers stealing the French made-to-order brand’s designs. “As a designer, you put all your heart into your brand, so it really affects and hurts you,” she says. “When it first happened to us, I was very angry, stressed and sad but it’s happened so many times that I don’t even have time to complain to each brand.”

The items being sold by these retailers are exact copies of MaisonCléo designs. Marie claims, “[Websites like Taobao and AliExpress] even buy trending items from brands to duplicate them. We once realized that we were about to send some blouses to the Taobao headquarters…”

When it first happened to us, I was very angry, stressed and sad but it’s happened so many times that I don’t even have time to complain to each brand.

Unfortunately for Marie, fashion has limited legal protection against plagiarism. Unlike other creative sectors such as music and art, there are rarely legal consequences for copying a design. After confronting a fast-fashion brand about dupes being sold on their site, Marie says, “They told me they would remove the pieces from their website, and they did. But a few weeks later, they not only put them online again but also launched them in several other colors and patterns. I don’t want to waste my time trying to fight against them as it’s just not possible.”

But just because there are no laws against dupes doesn't make them any less morally dubious as there is still a real impact on the brands being stolen from. For one, the promotion of dupes can take sales from the original designer. When the brand is a large well-known label, it somehow doesn’t feel that bad. But the smaller the brand, the more important each sale becomes. For an independent brand, having consumers choose a dupe over their product can be detrimental.

With popular sources of dupes being brands including Boohoo, SHEIN and AliExpress, the biggest beneficiary of dupe culture is fast fashion—an industry that is notorious for its lack of environmental and social responsibility. Textile production contributes more to climate change than aviation and shipping combined and is responsible for 20 percent of industrial water pollution. And, 93 percent of fast fashion brands don’t pay garment workers a fair living wage. For brands like MaisonCléo, which pride themselves on being sustainable by exclusively using deadstock materials and detail their expenses on each product page—it’s like twisting a knife in a wound.

While the appeal of dupes to the cost-conscious and trend-driven TikTok user is pretty obvious, we must consider the repercussions before we succumb to buying them. Marie hopes that educating people on the “atrocious” practices of the brands making these products will make them less attractive to consumers. “When you are aware that the cost of a fast-fashion product doesn’t even cover a meter of fabric, you realize how much work is put into sustainable brands and why our clothes are priced the way they are.”