My second favorite thing on ice.

The Inspiration The Design
The Benefits My Review

These days, my TikTok For You Page looks like one long to-buy list. There's an overwhelming amount of innovation featured on the app, particularly in the beauty space, and honestly, I want to try them all.

But often, the best inventions are the simplest, and my latest summer obsession is just that. You've probably heard of skin icing, a method of rubbing frozen water or other mixtures along your contours to emphasize cheekbones and jawlines, de-puff bloated skin, and calm irritation and acne. You might have even tried it out—and if you have, you know firsthand that it can be a little tricky. And chilly, for that matter.

There are some icing-specific tools out there, but they can often be delicate, made of glass or other breakable materials that prohibit any sort of real pressure. To fully reap the benefits of icing, it needs to be massage-like.

Originally inspired by her mother, who swears by skin icing as the secret behind her youthful complexion, Forrai realized there was a serious gap in the market for a user-friendly skin-icing tool. "I grew up in Hong Kong," Forrai says, and moved to Australia just before her teen years. "Living in Hong Kong, I’ve always been exposed to the latest creative tech innovations and been at the forefront of fashion trends. The fast-paced innovation there has fuelled the entrepreneurial spirit in me ever since." When the idea for the Contour Cube struck, she put pen to paper and immediately began mapping out the design and details.

"Despite the Contour Cube’s perceived simplistic and minimalist look, it was an extensive development process," Forrai explains. She and her partner, Lewis, hand-built the Cube's early versions and samples to test out themselves. After landing on the final shape, the pair used their own 3D printer for a working prototype. Of course, Forrai's mother tested it first and immediately fell in love with the icing-made-simple Cube.

Fans of the Contour Cube seem to be equally interested in Forrai's entrepreneurial story as they are about the actual device. The first Contour Cube video to really blow up was actually a TikTok about how she built the business, which she casually posted before bed.

"The next morning, I woke up to my first batch of products completely sold out and the video hitting 100 thousand views, which continued to gain momentum until it hit 1 million views," she tells me. But that's still nothing compared to the second viral video starring the Contour Cube's muse: Forrai's mom—that one hit six million. And once you see Forrai's mother and her smooth, fresh complexion onscreen, you'll get why the Cube is flying off the (virtual) shelves.

Skin icing has long been considered one of the most effective ways to calm irritation, tighten pores, and reduce salt-induced water retention at least as far back as the 1700s. Applying ice also constricts capillaries, reducing redness, inflammation, and irritation with every pass. Actual ice isn't necessarily required, either.

Estheticians and skincare experts are all fans of freezing cucumber water, rose water, coconut milk, and more to reap various benefits. "You can experiment with ingredients such as freezing green tea for inflammation, lemon water for [radiance], coconut milk for anti-aging, and cucumber water for de-puffing," Forrai tells us. There's even a list of different Contour Cube recipes on the website for customers.

For my own first go-round with the Contour Cube, I figured it was best to start classic with just some straight-up ice. I tried it for the first time after returning from a very sweaty run and subsequent shower. Not only did my beet-red, post-workout face returned to its normal color much faster, but I saw less puff around my orbitals, which is typically a tell-tale sign of bloating. Honestly, even if it didn't give me the cosmetic benefits (and it really does), I'd hold onto this product forever purely because it feels so amazing on my skin. It was a massage, an ice bath, and a facial treatment in one, and it feels like heaven on hot summer days. 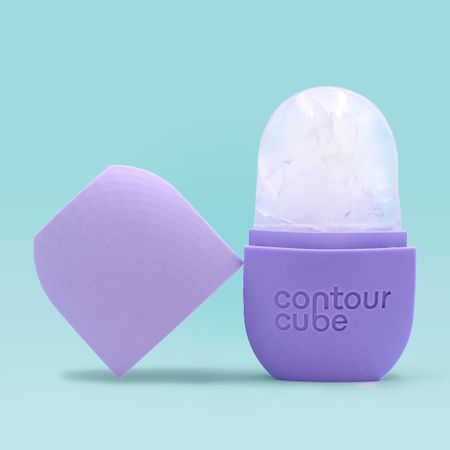 After trying it out, it's not surprising that Urban Outfitters now stocks the Contour Cube here in the States. And, as the brand grows, so do Forrai's goals and plans. "We’re working on new recipes to enable customers to customize their skincare routine and expanding the range based on our customers' real-time feedback on TikTok," she says. "This is just the beginning for our small business journey, and we’re keen to grow the business to new heights."