This Dark Under-Eye Circle Trend Is Viral on TikTok

2021 replaced faux freckles with this. 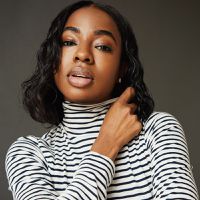 Beauty—like fashion, animal migration, and moon phases—is cyclical. It's not a surprise that Gen Z is embracing the battered-and-bruised grunge aesthetic like they invented it (sorry Zoomers, that was my parents) but the novelty of the latest TikTok trend dominating everyone's FYPs is the combination of grunge makeup with something long considered "undesirable": deep, dark under-eye circles. Yes, the hot new trend, at least on TikTok, is to use purple, blue, and red eyeshadows and liners to create the illusion of a dozen sleepless nights—or, maybe more aptly, a week-long bender.

In the video that's since racked up 8 million views, TikTok user @sarathefreeelf uses what appears to be a thick lip crayon to swipe on two lines just under her eyes, using her fingers to blend it out. The result is surprisingly natural, if a little Tim Burton-ish. She looks like she's had one too many wild nights lately, adding intensity to her eye color and the rest of her complexion.

I might be in the minority when I say I think it looks cool but that could just be because my own under-eye circles, if left unchecked with zero carefully-applied concealer, can look downright vampiric—and not in a Cullen way, either. Others with dark circles, though, were split in the comments. Some were quick to praise the original poster for inverting the stigma on something once seen as a flaw. Others still called out the poster, Sara-Marie Carstens, for attempting to make an insecurity trendy. For her part, Carstens says she personally deals with deep under-eye circles and made the video to feel better about herself.

Social media, especially those that promote creation and visual experimentation, has been turning features and conditions once considered a proverbial Glamour Don't into something we want to replicate. We've seen it with natural freckles, once considered something to conceal, cover-up, and hide. Now, an entire sub-industry has sprung up around drawing on your own freckles with special stencils, markers, and pencils. Gapped teeth were once something to be immediately corrected—remember the controversy around America's Next Top Model star Danielle Evans bravely standing her ground and refusing to close her (gorgeous) front-tooth gap on the show? Now, 14 years later, less-than-perfect teeth are considered unique, refreshing, and, youthful.

Personally, we're of the opinion that whatever makes you feel confident is the correct option. Maybe you feel best when layering thick concealers and powders for a flawless finish. Maybe you feel better with nothing, with darkening your circles like Carstens, or some combination of all three. Whatever you're feeling that day is what you should do. In the warp-speed age of social media, we'll all be on to the next thing in a few weeks anyway.

The One Concealer Practically Every Model Swears By
Featured Video