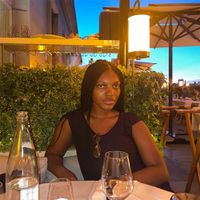 Tiana Randall
Tiana is a freelance beauty and wellness writer. They previously worked as an editor at Glossier and Office magazine.
Byrdie's Editorial Guidelines

The idea of a royal renaissance is one that has only been looked at through the glimmering eye of whiteness, purity, and elitism. To be the antithesis of these themes, Tia Adeola leads viewers into an imaginable afro-renaissance that she's created from her own worldview. "It's almost like I had no choice but to build this world," she says. When talking about her art history background and the abundance of monotonous hours she's indulged in while digging through archives, she recalls seeing "clothes, fur, and velvet" depicted in paintings, which she loved, but noted that "none of the royals are Black... I have to create that essence of a Black renaissance in my clothes."

On Sept. 9 at the Shed, the sight of glamorous chaos (that could only be imagined to take place behind the curtains of a broadway play) ensued ahead of Tia Adeola's spring/summer runway show. Building a world of her own, the designer intersects elements of sound, smell, art, and beauty to bring the whimsical vision she's created in her mind to fruition. The sultry sonic landscape that allowed bossa nova to echo throughout the room paired sweetly with the aroma of fresh red roses that filled the air. The romantic lighting emphasized the intentionally powerful and show-stopping beauty looks that were created to complement the glimmer of embellished pieces. The full sensorial experience came together to convey an illusionary backdrop to the breathtaking designs that were previewed. "With the entire Tia Adeola experience, I almost want to submerse my audience into my mind for that entire 10 minutes," the designer says moments before her fashion show.

As drama and grandiose measures of glamour seem to be the driving force behind this season's collection, Adeola mentions that every element that pieces the production together, including beauty, is familiar to her. "Everything you see on the runway are things I'd do as I come into myself as a woman," she shares.

Film noir and a profound love for the undimmed romance of theater become a big inspiration for Adeola as she channels beauty looks that reflect the dark glamour of the collection. Down the runway, she sends mesh dresses constructed with chiffon that flow in ways made to accentuate the feminine frame, similar to the late Thierry Mugler. Taking cues from iconic Mugler catwalks, she recalls that "makeup was such a huge element of his shows." Her repetitious regard toward his presentations from the '90s is the exact inspiration that ended up on her mood board—a dark natural allure and spellbinding gaze paired with a staggering lip—is something that is shared and loved between the two.

As we come to define dramatic glamour in our own ways, T. Cooper, the head makeup artist of the show, composed her definition of what glamour looks like by watching Aretha Franklin's biopic Respect.  "I love that era of glam" she mentions while dusting a deep burgundy onto the crease of a model, the "cut creases, and light lids, and the liner from that movie—I love it, it's fun." When taking direct inspiration from the film, the "big lashes, overlined lips, and the dramatic cut crease" is what made its way onto the physical runway. Displaying Espressoh's SWEETandSOUR eyeshadow palette, she points to the shade Tabasco, an intense brick red. "This red adds dimension to this palette and our look," Cooper adds.

As straightforward as it gets, T. Cooper breaks down Adeola's spring/summer makeup formula. "We're doing light lids and a darker crease, just to make the crease super defined," she explains. As for cheeks and lips, a "dark liner with a light pink in the center," warms the face up and complements the heavy amount of blush that was used. But as computed as this seems, the shape of the look varied depending on the model's skin tone. T. Cooper, who always looks after her models and makes sure they don't walk on the runway with an "ashy face," mentions that "not everyone can wear the same thing," but what they all share is the look of a nude lip.

Although glamour brings a hefty amount of blush to the apples of cheeks, T. Cooper says that her secret weapon for a dramatic and glamorous look is dewy and clean skin. "The star is the skin, we've been really concentrating on the skin," she says immovably. "Espressoh makes a great concealer and we've been using that to even out any imperfections," she adds. The level of respect she puts toward skincare doesn't go unnoticed when the second beauty sponsor of the show is Dieux Skin, a clinical skincare line. While models walk around in their green-packaged eye patches, it breathes the sentiment that T. Cooper shared about "no one noticing the work that goes into beautiful skin," to life.

But Adeola's first love, within the frame of glamour, was always hair. "I love long hair. I grew up wearing braids my whole life," Adeola says while getting her hair flat-ironed for her final walk that closes out the runway. Her affinity for long braids was present during the runway show as thick singular braids were interloped by several silver metal rings.

The key hairstylist, Mike Martinez, who was wrangled up within less than a week before showtime to style out 38 models, believes that cross-correction was his main prioritization with the time sensitivity. "We wanted to do long braids on the girls and we wanted to feed them in, but we just didn't have the time... We wanted to keep things fluid and make the girls comfortable," he says as girls walk effortlessly throughout the backstage area while holding their braided ponytails by the metal ring like a purse. Shockingly, Martinez allowed the models to pick their hairstyle. "Some girls wanted the braid and some wanted to wear their hair big and natural," he mentions. Speaking on the immediacy that fashion shows invite, remaining "flexible" and "innovative" during a show is imperative to the process. Working with pre-stretched 56-inch braiding hair warranted the burning of flyaways and ends as the drying process would have been combative with the nature of backstage.

Yet again, Tia Adeola showcases the substantial beauty that feeds off a woman's natural allure and essence. Focusing on what we've loved and seen in the past—floor-length braids, metal hair accessories, glamorous cut-creases, and shining liner—is found to be fresh and innovative when paired with her transcendental vision.