Seriously: Having Rough, Callused Feet Was Cool Where I Grew Up

I am sitting on my futon, picking at my feet with fascination as my husband looks on, horrified. “Look how much skin is coming off!” I exclaim, sticking the flats of my feet in his face.

Currently, I am ankle-deep in Baby Foot, the Japanese product that claims to remove dead skin from your feet and leave them infant-soft, as the name implies. Many websites and beauty bloggers have sung its praises, but I was always dissuaded by the hefty price tag—around $30 for one set. Plus, I wasn’t even sure I wanted to get rid of my significant calluses. Where I grew up, leathery feet were not seen as a sign of neglect or lack of hygiene; instead, they were seen as strong and badass.

I grew up in Papua New Guinea, a country located on a large island above Australia. My American parents were missionaries there, and I grew up walking barefoot on gravel roads in Eastern Highlands Province. You may spot flip-flops here and there, but if you go to the bush, almost everyone is barefoot. I would see Papua New Guinean women walk down the road by my house with large bundles balanced on their heads and their naked feet wide and gnarled, like armor.

The international primary school I attended as a kid didn’t require shoes; in fact, wearing any was deemed uncool. Our favorite activities included climbing trees and running around in the rain—and shoes only slowed us down. It took years to develop calluses that enabled you to walk around painlessly, and once you did, you wanted to maintain them as much as possible.

Once, my best friend Elin felt a sting underneath her foot as she was playing at our school. She didn’t think much of it, and only hours later did she realize she’d stepped on a tack—and there it was, still embedded in her sole.

I’d spent the 15 years that I lived in Papua New Guinea cultivating my calluses and proudly comparing them against those of my friends. But I’ve been back in America for seven years now—and New York for the past three. In a city as putrid as New York, it’s common practice to remove your shoes when entering someone’s apartment. If I wore shoes without socks to someone’s place, I’d try curling my toes underneath me after unbuckling my sandals to hide them, but my crusty heels often gave me away. Not to mention that I work at a magazine company, where there are Fancy Ladies everywhere with perfect, tiny feet framed by perfectly tiny high heels. And while no one had made snide comments about my feet (that I knew of), at a point, I decided that it’s time to stop feeling embarrassed.

First, I tried using pumice stones, but they’re powerless against my rock-hard skin. So I finally gave in to Baby Foot’s alluring promise. After receiving my Amazon package, I washed my feet, stuck on the provided plastic booties filled with gel, put thick socks over those, and settled in to watch Buffy the Vampire Slayer for the hour it takes the product to work its magic. 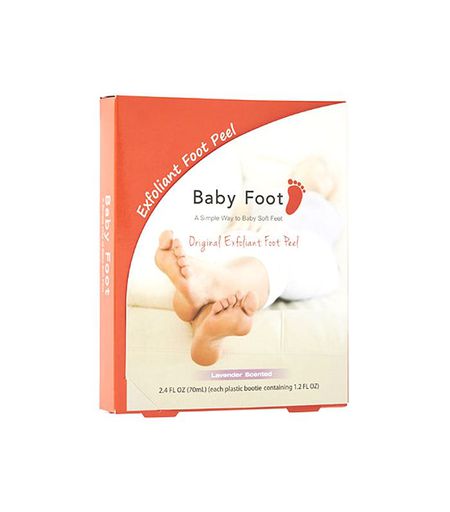 Baby Foot’s website boasts “17 types of natural extracts" with extracts from things like apple, grapefruit, and sage. But alcohol, lactic acid, and glycolic acid are among the first five ingredients, and they stung—I could feel them burning through my soles.

For the first few days, nothing happened, other than my skin feeling uncomfortably taut and dry. Was this Baby Foot stuff all a hoax? But then the flaking began—slowly, and then all at once, as John Green says (he probably tried Baby Foot while writing A Fault in Our Stars, right?).

The skin that came off my feet—particularly the heels—was super thick and had lines on it like the rings of a wise, old tree. Goodbye, my friends, I thought as I flicked thick pieces into the trash. You aren’t supposed to pick at it, but I couldn’t help myself once the shedding really got going. It’s like that scene in American Psycho where Christian Bale peels a complete layer of skin from his face in one piece.

As a result, I was forced to wear close-toed shoes for the next week. I attended a baby shower and ended up wearing a floral-print dress with Adidas Superstars (but it kind of worked). When I removed my socks, skin poofed out like snow. I felt like a slug—but instead of slime, I left flake trails in my wake. Showers were the most dramatic, after which dampened skin sloughed off in long strips. I wondered if it was worth this gross process but reminded myself how smooth my feet would be after a mere two weeks of Kafka-esque epidermis hell.

Our primary school in Papua New Guinea moved locations when I was in sixth grade, and they instigated a shoe rule at the new campus—that they had to have straps on the back, more specifically. Construction had just been completed, and the administration was worried about students getting hurt by loose debris.

My class was naturally furious and started a petition, convincing nearly everyone on campus to sign it: We wanted our bare feet back! We didn’t live in America—this was the jungle! To our utter dismay, it didn’t work, and we grumbled our way through that school year. Then, we moved to the middle and high school campus, where shoes were also mandatory. But we were allowed to wear flip-flops, at least, and we always went barefoot during P.E. and sports practice. Callus maintenance was still possible.

Sometimes my brother tells people he’s from North Carolina, where we were born. I used to think it was a cop-out, but now I understand that people don’t always want the complicated answer. None of our friends or family are in Papua New Guinea anymore, and if we ever go back, it will be a short visit. Yet in the back of my mind, I always pictured myself returning to Papua New Guinea and proving that I can still go barefoot like nothing has changed. Like it’s possible to have one foot in each country, each culture. But they’re on opposite sides of the world, and I’m not that tall.

Plus, it’s actually quite freeing to plant both feet onto a single continent (at least for now). As a third-culture kid, I will never fully belong in America, much like I never fully belonged in Papua New Guinea. But I’m great at adapting, like a hermit crab moving from shell to shell.

As my skin fell away, a pinker, softer layer revealed itself. It’s still tough and a bit discolored, especially at the heels. I would probably have to undergo several sessions of Baby Foot to get rid of my calluses completely, but it’s noticeably less off-putting. The flakes were now creeping up the sides of my feet and wrapping around my toes. I was literally itching to use lotion, but it would be counterproductive. You’re supposed to wait at least two weeks between Baby Foot applications, so I may go back soon for more. Or maybe I’ll wait a bit so I can enjoy the last bit of the summer sun on my freshly peeled feet.

11 Foot Peels That Rival the Effects of a Great Pedi