written by
Avery Stone
Avery Stone is a commerce editor at Dotdash. She writes and edits beauty pieces for Byrdie. She previously worked at HuffPost, For The Win, and DEPARTURES.
Byrdie's Editorial Guidelines
Avery Stone
Our editors independently research, test, and recommend the best products; you can learn more about our review process here. We may receive commissions on purchases made from our chosen links.

Our editors purchased the Theragun G3 and G3PRO themselves, so we had them evaluate both massage guns. Keep reading for their thoughts.

We’ve all dealt with muscle soreness or tightness, whether your legs feel like Jell-O post-workout or your shoulders tense up after a long day at your desk. The good news? A massage gun can provide you with real relief, ASAP. “Massage guns help speed up recovery, especially after a tough workout,” says Cori Giuliani, an ACE-certified trainer at OrangeTheory Fitness. “They can also be used as a pre-workout warmup to help prepare the muscles for use, such as before a long run.”

One of the most buzzed-about massage guns is the Theragun, which we bet you’ve seen all over Instagram as of late. Originally founded in 2008 by chiropractor Jason Wersland, the percussive therapy brand launched its flagship model in 2016—but last year, it came out with the professional-grade G3PRO as well as the G3, a more affordable model meant for everyday use.

We tapped two of our editors—Byrdie VP/GM Leah Wyar, who owns the G3PRO, and Sophie Moore, an editor at our sister brand, Brides, who owns the G3—to dish about their experiences. So, is Theragun worth the hype? Read on to find out.

About the brand: Theragun is a well-known percussive therapy brand founded in 2008 by chiropractor Jason Wersland.

We know—you wouldn’t normally think of a massage gun as sleek, but the design of the Theragun G3 is super streamlined. Featuring an ergonomic handle, it comes in both black and white and includes four antimicrobial attachments: a standard ball (for overall use), a dampener (for tender areas or near bones), a thumb (for lower back and trigger point therapy), and a cone (to pinpoint muscle treatment). (Theragun also sells these attachments separately for $20 a pop.) Also included is a power adapter and a travel carrying case, which Sophie says is “chic and handy for storing.” 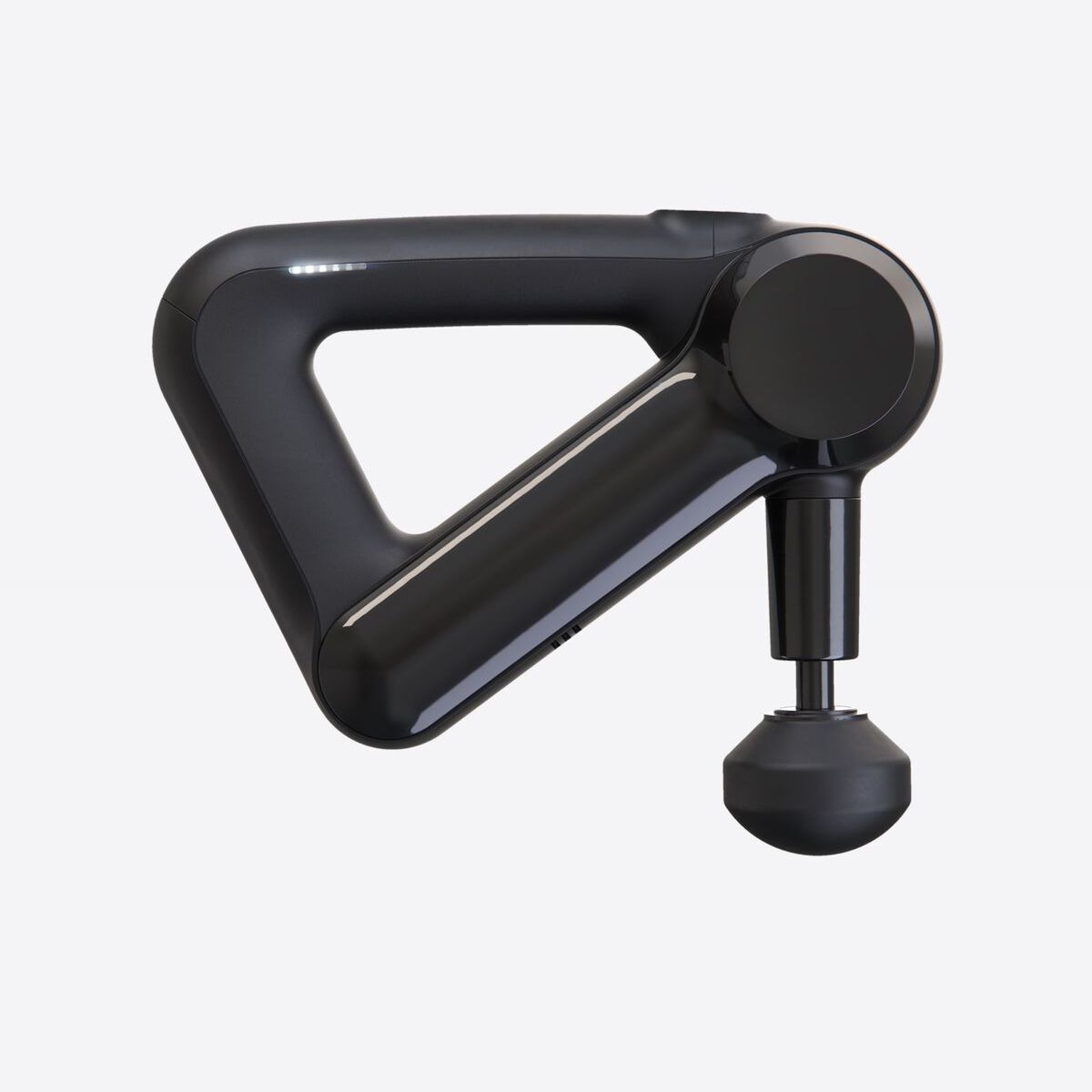 If you’re worried about extra cords, don’t bother. The G3 is totally cordless, with a built-in lithium-ion 3-cell battery. The manufacturer promises a 60-minute battery life (which may vary slightly depending on what speed you use).

Want even more options? The G3PRO definitely takes it to the next level. This model comes in black (with a blue hinge) and includes a battery charger, a travel case, an attachment pouch, and six attachments—the G3’s four, plus a large ball (for large muscle groups) and a wedge (for scraping, shoulder blades, or IT bands).

In response to our current health situation, Theragun is having a sale (of up to $150 off for U.S. customers) and donating a portion of the proceeds to Feeding America, a nationwide network of more than 200 food banks, to help those in need. The company is also donating more than 300 Theraguns to healthcare professionals at more than 60 hospitals around the world.

The G3PRO’s design is also significantly more versatile. “There’s an adjustable arm with four different positions,” explains Leah, “so you’re able to hit the tight spots on your own.” Its battery is more powerful, too: a Samsung lithium-ion 4-cell that lasts up to 75 minutes. An added bonus? It also comes with a spare battery, which Leah loves: “The extra battery means there’s no downtime when the battery goes dead,” she says, “because there’s always a backup.”

In terms of weight, the G3PRO is slightly heavier, at 3.10 pounds, while the G3 clocks in at 2.7. Both Sophie and Leah mentioned that their Theraguns could feel a bit heavy after using it for a while.

Although both Theraguns scored major points for design, neither prizes style over substance. Powered by an industrial-grade Japanese motor, the G3 delivers up to 40 pounds of force to your muscles, while the G3PRO can deliver up to 60 pounds. Both models have two speeds for an extra-customizable treatment: one at 40 percussions per second, the other at 29. 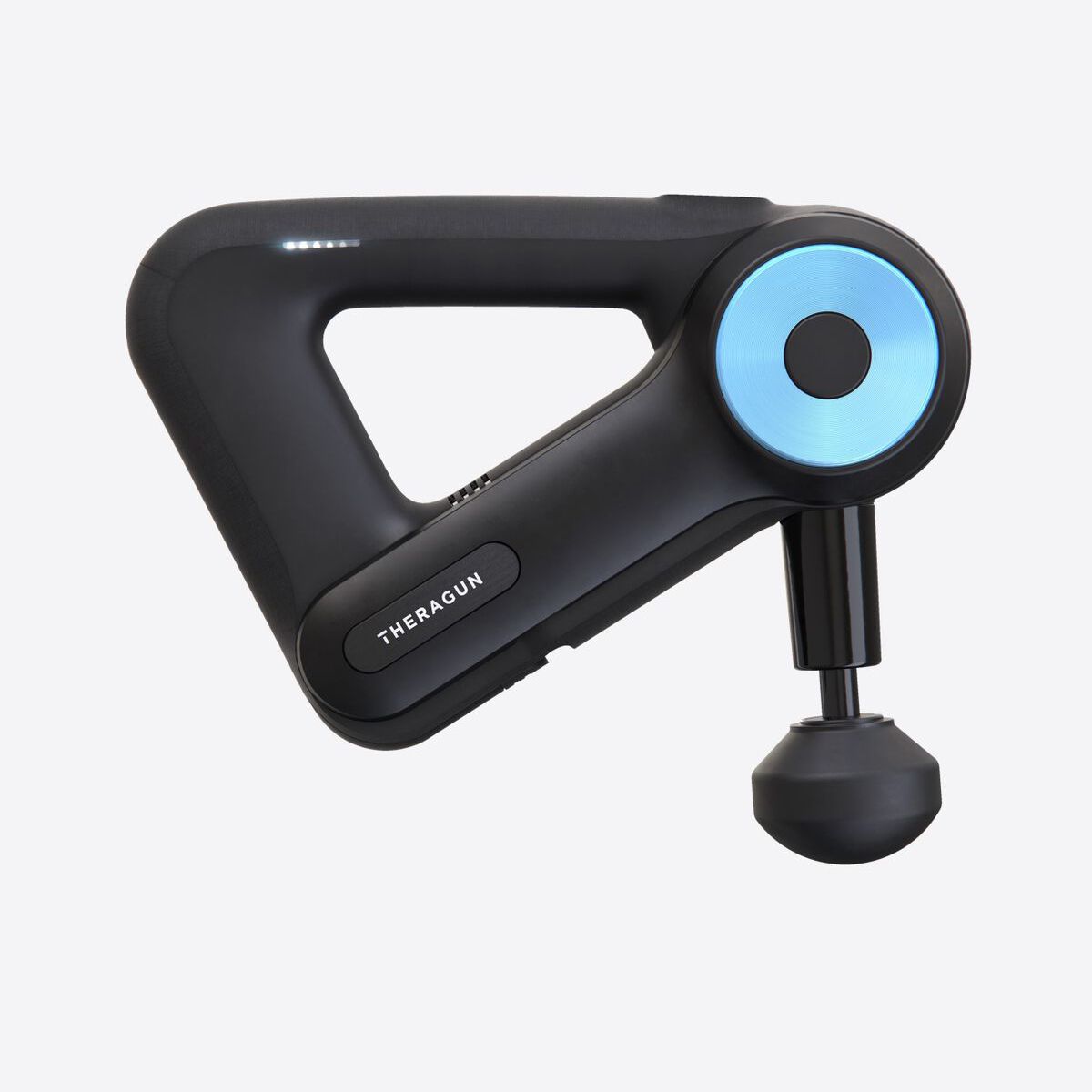 Sophie uses her G3 nearly every day to target a variety of issues—including tight and sore shoulders, leg muscles, and her lower back (to treat sciatic nerve pain from a back hernia). “With the shoulders, the relief is somewhat immediate,” she says, “but this is definitely a tool that I’ve benefited from using consistently over time. I also use it to target my IT bands, quads, and sometimes even the sore balls of my feet!”

Leah uses her G3PRO slightly less—once or twice a week—mainly to relieve her tight shoulders and neck. However, in her mind, a little goes a long way. “The performance is amazing,” she says. “I just need to spend a minute or two on each area and it really makes a huge difference for several days—It’s not just short-term relief.”

Although our editors found the Theragun to be very effective, Giuliani, the OrangeTheory trainer, warns against substituting a massage gun for stretching: “Stretching is a must-do for both before and after any workout,” she says. She also suggests incorporating a foam roller into your recovery routine. “Massage guns and foam rollers are two different types of therapy, “she explains. “Foam rollers are used for self-myofascial release (SMFR). I find the massage gun is able to provide deeper relief and in less time than foam rolling. That being said, I have and use both.”

According to our editors, the only real drawback was noise. Both Sophie and Leah noted that their Theraguns were loud, even though the manufacturer claims that the G3 is the brand’s quietest iteration yet.

Connectivity: Get the app to maximize potential

Theragun also offers a free app, which is available on both iOS and Android devices. Inside are step-by-step tutorials for how to treat different muscle groups, as well as solutions for different types of chronic pain relief. If you have questions—or are just looking to get the most out of your purchase—this is the place to start.

There’s no sugarcoating it—neither the Theragun G3PRO nor the G3 come cheap. The G3PRO is listed at $599 and the G3 is listed at $399. “I got this my G3 on Black Friday and it was $200 off, so it seemed doable,” says Sophie, “But the price is very steep and I probably wouldn’t have bought it at full price. That said, I love it so much now that I would pay full price for it.”

Leah agrees that the price of her G3PRO is high, but adds that if you have someone else in your life who’ll use it too—for her, that’s her husband—the price feels much more reasonable. Also key to note is that Theragun offers a third, more pared-down model, the liv, which retails for $249.

The Hypervolt (view on Best Buy), another buzzed-about percussive massage gun, is one of Theragun’s main competitors. We enlisted Anisa Arsenault, a senior editor at our sister brand Verywell Health, to share her review of her Hypervolt: “I bought the Hypervolt after months of deliberating and weighing other massage gun options,” she says. “I'm definitely glad I did—as a runner, having a device that can get out knots and alleviate tightness after a workout feels like having a secret weapon for recovery.”

In fact, she tried both the Hypervolt and the Theragun and settled on the former—for a few reasons. “At $349, it’s less expensive than the Theragun G3 and much less expensive than the G3Pro,” she says, “But offers more percussions per minute on the highest setting: 3200 compared to 2400. It also has three speed settings and five attachments, including a forked option; the G3 only has two speed settings and four single-head attachments.”

Still, there were some drawbacks: “The Hypervolt didn't arrive with any real user guide,” she explains. “Also, once in a while, the attachment will pop out while I'm using the gun. This happens because I don't have it in there tight enough, but it can be a little hard to tell.”

Overall, she felt that the Hypervolt met her expectations. “I think it's very effective for immediate relief from muscle soreness or stiffness,” she says. “I admittedly bought it for injury recovery, and can't say it's a total cure-all, but it’s the same exact product my physical therapist uses, so I think it's a useful tool for athletes to have.”

The Verdict: Worth the investment—especially if you have chronic pain

Both Leah and Sophie agreed that their Theraguns were a serious investment, but that it was worth it if you can swing it financially. Of her G3, Sophie says that especially if you suffer from chronic pain, it’s “very helpful with breaking up tense muscles and increasing blood flow.” Leah echoes her sentiment about the G3PRO: “If tight muscles—or headaches as a result (which is my issue)—are a regularly occurring problem for you and you have extra cash to spend, then yes, buy it. It’s a total go-to in my house.”