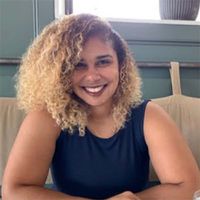 What do Black-ish, Mixed-ish, Grown-ish, Matrix Reloaded, and Matrix Revolutions all have in common? Araxi Lindsey, the talented hair department lead behind the popular franchises. Lindsey, who has also worked as the personal hairstylist for Tracee Ellis Ross and Jada Pinkett Smith, has won an Emmy for her innovative approach to on-screen styling. When it comes to hair in Hollywood, she's become the go-to person for creating natural hairstyles that not only look good but enhance each character's persona.

Her most recent work is on the big screen in Netflix's Western film, The Harder They Fall, where she designed and styled the hair for Regina King, Deon Cole, Danielle Deadwyler, and the Blue Lady. Ahead, we spoke to Lindsey about her inspirations for the various characters, creating natural hair looks for a Black Western film, and working during the pandemic.

What were your inspirations for the hairstyles in The Harder They Fall?

After reading the script, I researched classic images, read about each historical figure's events, and studied different cultures of that period. I looked at pictures of Native Americans and African and European hairstyles from the late 1800s to the early 1900s. Then I scheduled meetings with Jeymes Samuel and each leading actor to listen to their ideas for their characters. This process allowed me to move forward with my thoughts and trust my team's creativity.

Black Western culture is a genre we haven't seen much in film. How did you collaborate with costume and design to achieve the overall look of each character?

We've never witnessed a Black Western in this light. We've had past Westerns but nothing of this scale that depicts various historical Black and Native American figures in one film. Working on a movie that highlights historical figures, has such a dynamic cast, and gets Oscar buzz is gratifying. It felt great to be a part of a project like this because there are a lot of firsts, and the artistic storytelling is boundary-breaking.

I'm usually mindful of costumes since hair and outfits often compliment each other. If a character with long hair is wearing a high collar, I like to pull hair away from the neck area. If a woman with long hair is wearing a backless dress or something elaborate, I like to pull the hair in a different direction to accent the details. I collaborated with the costume team to show the difference in social class between The Ladies of the Night from Redwood and Douglastown.

What was the process like creating Black natural styles for a Western?

After reading the script and prepping my mindset on the period, I dwelled on what hair products would have existed for Afro-textured hair. I then decided to rely on the wisdom of nature. Of course, I used modern products to improve and maintain the hair's health. Still, when it came to styling, I tried to imitate the products and material people of that time would have had access to for maintaining their hair. I primarily used seed oils, waxes, salves, and natural apothecary products. I would use these products to manipulate the hair and create the final hairstyles to match each character's lifestyle.

The weather is an integral aspect that can make or break a hairstyle. How did you adapt to the changing weather conditions on set?

Approaching nature with the respect and admiration she deserves, I used the changing weather conditions as my finishing product. Afro-textured hair is mutable. It can flow gracefully with any weather condition when left in its natural state, depending on the character's action. My team and I stayed on top of protecting each character's hair in the rain, dust, excessive heat, and snowy weather that Santa Fe, New Mexico, gave us.

How did you use accessories and accents to evoke Black culture in the hairstyle designs?

Most of the accessories I chose paid homage to Native American and African culture. I wanted to showcase the adorned accessories of the travels and settlers. There's a character named "The Blue Lady," which Jeymes Samuel gave me the direction of displaying her as a beautiful creature. Listening to him describe her, I began to think about kings and queens that once ruled Africa. I imagined what she'd look like walking out of a tomb from the afterlife. I used classic cornrows to express that regal side of her. I accented them with gold feathers to pay homage to those who traveled west for gold.

You used a unique blend of natural and protective hairstyles throughout the film. How did storylines influence a character's hair journey?

The Harder They Fall showcased three towns. Two of those predominantly housed people of African descent. To show the difference between both towns, we decided to style hair differently. For the people of Redwood, my second-in-command, Tinisha Meeks, and I decided to create European styles with an African vibe using accents of gold accessories. For the people of Douglastown, we decided to show more nomadic styles with a Native American and African flair using accents of silver accessories.

How did working during the pandemic change your approach to styling hair? How was the experience of being the first American film to resume on-set production?

Being the first American film to resume on-set production has given me a genuine appreciation for my team. Returning to production in another state, away from our families, had challenging moments. As a Department Head, I feel responsible for my team's wellbeing and comfort. I'm proud to say my team of 10 hairstylists and barbers never caught the virus during production. Wearing our HSC protective gear and taking the extra time to disinfect and sanitize more than what's recommended by the board of cosmetology added a bit more to our daily tasks, but knowing that these small steps helped protect ourselves and those around us made it worth the time. I'm happy we were able to create something beautiful during this time.

How Jennifer Hudson's Makeup In Respect Captured The Queen of Soul, Aretha Franklin