The Ballet Flat Is Back

Gen Z has embraced the "basic" shoe with open arms. 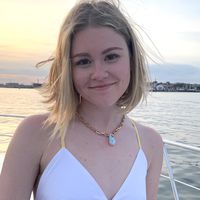 At  Miu Miu’s fall 2022 show last spring, models glided down the runway in satiny ballerina slippers paired with chunky knee-high socks. The shoe also showed up at Simone Rocha, Maison Margiela, Chanel... and the list goes on. Essentially, it seems like the fashion community made the unanimous decision that it was time for the ballet flat to come back—and Gen Z it-girls quickly gave it their stamp of approval. The classic silhouette will never truly go away, but it has been relatively off the grid for some time now, with platforms and sneakers ruling shoe trends for years. But it seems like suddenly the ballet flat is shedding its "cheugy" reputation, and is being welcomed back with open arms.

It’s not surprising considering the balletcore aesthetic also became popular this year, which followed in the footsteps of other ultra-feminine trends like cottagecore and regencycore, but the return of the ballet flat seems to be more than just a passing trend.

The shoe originates from one of the most sophisticated art forms, ballet, but made its debut in mainstream fashion when Italian shoe designer Rose Repetto created a pair that caught the eye of actress Brigitte Bardot, who wore the flats in the film And God Created Woman in 1956. Not long after, other stylish it-girls of the ‘50s and ‘60s became fans of the style, including Jackie Kennedy, Princess Diana, and Audrey Hepburn.


For Gen-Zers and millennials, though, our earliest memories of the ballet flat most likely came from Gossip Girl's Blair Waldorf, who often donned the shoe with her private school uniforms and matching headband. Off-screen, it was the Tory Burch Reva flat that defined the mid-late aughts, paired with skinny jeans and chunky necklaces. The shoe was a staple of truly every style subculture—they were a constant of indie sleaze icons like Kate Moss, Amy Winehouse, and Alexa Chung—but has been crystallized as a preppy-basic hybrid in most of our brains thanks to Waldorf.

However, everything comes back eventually, and we finally have enough distance for the style to feel as fresh as it did in the '50s. Today’s fashion it-girls like Kendall Jenner and Lily-Rose Depp could not be any more different than Audrey Hepburn or Blair Waldorf, yet they have made ballet flats staples of their looks—Depp's signature Repetto ballet heels is probably what started the trend in the first place.


Maybe you want an edgy version like Miu Miu’s take on the shoe with chunky buckles, or you want something more french-girl chic like Chanel’s Ballerinas, which happens to be a favorite of Matila Djerf and Paloma Elsesser, who collects the shoe in off-beat colors. At Copenhagen Fashion Week, influencer @taniceelizabeth, styled her Margiela Tabi ballet flats with a sleek all black look, which is an instantly covetable look for the upcoming fall season. On the other hand, models like Orion Carlatto and Minami Gessel have been embracing the ballet influence with details like straps and bows.

While the shoe is certainly having a high-fashion moment, the appeal of the slipper was always its accessibility, and in 2022 nothing has changed. Retailers like J. Crew and Reformation are offering the style at every price point, or you could just dust off your old pair from high school for an authentic look—after all, what's old is new again.