I Tried 3 Makeup Looks Straight Out of My Favorite Telenovelas

And learned a lot in the process. 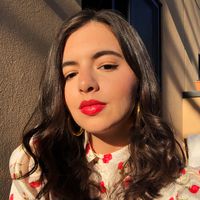 Andrea Devoto
Andrea Devoto is a journalist and content creator born in Peru, raised in Puerto Rico, and currently based in New York.
Byrdie's Editorial Guidelines

Telenovelas are works of art. For some of us, the drama, over-the-top costumes, and villanas have been a religious part of our afternoons since childhood, when we’d gather in front of the TV with our mothers and abuelas, who were eager to know who ended up with the galán they had a crush on. These dramatic characters weren’t just people we got invested in; for most of us Latinxs, they served as our first source of fashion and beauty inspiration, too.

After being in Mexico last month and seeing all of the billboards emblazoned with telenovela stars wearing their character’s looks to announce a new season, I felt inspired to try some of the most iconic beauty looks that I’ve seen in other telenovela—for fun, and, you know, for the culture. I reached out to Gabriela Trujillo, makeup artist and owner of Alamar Cosmetics, to ask her about what it takes to achieve these looks flawlessly.

“It’s been a long time since I watched telenovelas, but I remember [the makeup looks reflected] the innocent character, the very sweet and humble, and the villain,” recalls Trujillo. To recreate these looks, she recommended that I first start with a very natural foundation, “Their faces where very natural and fresh, it was more about the lips and the eyes,” she pointed out.

With these tips in mind and a little bit of time watching YouTube tutorials, I took the challenge and recreated the beauty looks from three different type of characters: a very elegant villain, a mysterious woman, and a popular girl from a private high school. Check out the end results below and what I learned from recreating each one.

As Trujillo told me, the villains always had arched eyebrows and intense colored lips, which was the key to recreate this look from Paola Bracho, who wasn’t the nicest character from La Usurpadora. With this, I wanted to first highlight her fierceness by defining the shape of my brows as much as possible with Urban Decay’s Brow Blade, then accentuating the crease of my eyelids (which was difficult, because mine are not naturally defined) with a dark brown eyeshadow, blending it very well to create that faded out effect. Then, I finished off the look with Glossier’s Cloud Paint in Storm on my cheeks and Reina Rebelde’s Lip Color Stick in Fresa for a touch of elegance.

After doing this look, I FaceTimed with my mom and she told me: “Andrea, why don’t you wear makeup like this more often.” Typical Latina mom! But honestly, I’m ready to try it again for a special occasion.

I have to be honest, this one was the hardest one to recreate. Jade was a very sexy and mysterious character and her makeup look was all about making her eyes be the center of attention. She wore very intense eyeliner look that was very challenging to recreate, but with patience and my Le Crayon Khôl eyeliner from Lancôme, I managed to achieve a similar shape from the one she wore most of the time. For the rest of the look, she always wore natural tones, so I added a dark brown eyeshadow on my eyelids and finished off with Zara’s lipstick in the shade Ultimatte.

I obviously wouldn’t dare to wear this exact eyeliner look outside of my house. But after seeing how elegant my eyes looked with a graphic line, I’m definitely going to be trying a more wearable version of this for a night out.

And, last but not least, the rich and popular girl with a very childish personality. I wanted to recreate this look because I remember this was the one all the girls from my school were always trying to achieve. Mia Colucci had a very girly style and, as you can see, she wore a lot of pink makeup. Of course, my eyes are completely different from hers, but I did my best with a very bright pink shade from Luna Magic’s Uno eyeshadow palette, and added Le Crayon Khôl eyeliner from Lancôme to make my eyes appear a little bit bigger. Then, I made sure to add a generous amount of Revlon’s powder blush in the shade Ravishing Rose to make my cheeks as pink as possible, and also created some contour with Fenty Beauty’s Instant Warm Bronzer in the shade Bajan Gyal.

Even though the end result didn’t look much like hers, I enjoyed playing with a lot of pink—a shade I’m not used to wearing as much in my makeup routine. For this one, I later erased just the eyeliner with a cotton swab and kept the rest on for a day of work around the city.

Next, see the best fall makeup inspiration from Latinxs on Instagram.