Meet the designer giving a new life to tech waste. 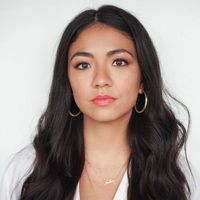 Tega Akinola is interested in juxtapositions: Sporty and ladylike, casual and luxurious, old and new. The focus of her work, the 22-year-old designer tells me over a video chat, is transforming banal objects in ways that push them beyond their everyday use. Lately, her favorite materials are the sort of home office items your eyes routinely gloss over or identify as desperately needing an upgrade. In early 2020, while locked down at her parents' home in the U.K. Midlands, she discovered a bag of assorted electrical cords—faulty phone chargers, wired earbuds, ethernet cables—and decided to divert their path from the waste bin onto a pair of old heels, a collision of castoff accessories.

Propelled by a combination of imagination and boredom, she cut and glued fragments onto the court shoes' uppers and block heels, with swirls of sheathed wiring around the toe, a USB port ankle closure, and prominently placed headphone jacks and volume control. The result, her first experiment with these materials, went instantly viral, even capturing the attention of visionary footwear designer Salehe Bembury. She's since paused a budding career in sports psychology to pursue design full-time, created a sold out run of cable heels for the conscious boutique APOC Store, and has started branching out to other silhouettes: A pair of Air Force 1 Lows, a bucket hat, and a handbag crafted from a reconstituted speaker, to name a few.

A fan and student of Nicole McLaughlin's inventive approach to upcycling, Akinola understands that the magic of her designs is rooted in their transparency—the ready display of hardware, the celebration of a telling detail—and how those choices force a reconsideration of the original object. Her work with cords and cables forges a necessary bridge between our understandings of the digital and the physical, much like the wires themselves, creating space to reckon with the ways we compartmentalize the two.

Akinola readily admits that the environment was not on her mind when she first started puzzling together these accessories, but her designs call attention to the single fastest growing waste stream worldwide: E-waste, a broad category that includes everything from cables to computers, phones, washing machines, DVDs, exercise equipment, and more. At the current rate, the world's population is producing a "mountain" of electronic waste about the weight of the Great Wall of China each year, most of which ends up being illegally dumped in developing nations to toxic effects. This rapid growth is owed to both the short life cycles of most electronic products and a dismal lack of viable recycling options. A few cable heels will not be the solution to a problem of this magnitude, but they can start a conversation.

Gaby Wilson: What was it about the cables that you were inspired by?

Tega Akinola: It was literally the first thought that came to my mind when I saw the USB port. That sort of action of connecting. That's what reminded me of a fastener on the ankle of a heel, and everything else was just improvising.

Are the cables a difficult medium? What are they like to work with?

They're quite difficult. My process has changed now that I started selling the pieces, but when I first started working with the cables, I was just gluing them, and even then, it was so difficult to get them to stay put. Now it's difficult in a different way because I use cable ties, so I've gotta think about where they're going to go and how that placement is going to impact the overall design.

It's almost like architecture. Every choice that you make has to have both this functional aspect but also an aesthetic aspect. Can you walk me through the design and construction process for a pair of shoes?

Sometimes I have a design on paper, but most of the time, I don't because the finished product just never sticks to it. First, I get the shoe, and then, I just kind of lay the cables on top and sort of form different kinetic movements with them. Then, I think about where I'm going to start attaching the cables on the shoe, where the cable ties go, how to finish it off. It's very improv.

Have you always been into playing around with your clothes and things, customizing them, cutting them up?

This might sound really weird, but my mom used to try and get me to do all these kinds of things—she's a professional seamstress and also does art pieces, she makes bags, jewelry, lots of things—but I wasn't really having it. I would draw clothing designs sometimes, and when my mom would actually convince me to do something with her, I would sort of jazz up stuff I already had in my wardrobe. But I think in my teenage years, I liked sports more.

I was gonna say!

Yeah, that's where the sports psychology comes in.

What sports did you play?

I used to do athletics, and then I moved into basketball.

For basketball, did you have a favorite team?

Yeah, the Lakers. I know they're not doing well right now, but there's just something about them.

It's interesting to me that you make so many heels because I feel like, looking at your fit pics, you live in sneakers.

I really do! I don't know why, but I think I actually prefer it that way. When I'm not making something for myself, I'm able to remove myself from the outcome and be a bit more objective.

It almost feels like you're making the thing that you wish existed.

The thing is, I'm not actually sure if I would buy a Nike heel! I think I just love the idea of something, the concept of it existing.

How much of your design practice has to do with an interest in sustainability?

When I first started doing it, sustainability wasn't at the forefront of my mind in all honesty. I'd always been repurposing stuff but the term "upcycling" wasn't there, you know? It was just taking what's in your wardrobe and making it new again. When I did my research more, I realized, Oh, if I'm using used stuff and repurposing it, I'm contributing to sustainability, which is obviously more important than ever now, so I started to hone that a bit more and actually actively incorporate it into my process now. But when I was searching for secondhand stuff at the start, it was to save money. Now it's like, I can save money and contribute toward sustainable processes and operations.

I think that's an important point: Upcycling is not a new concept, even if broad use of the term might be. A lot of the time, it emerges from necessity, and it's just what you end up doing when you want to make sure that you're being resourceful about the things that come into your life. You find creative ways to adapt and reuse things. My family is from the Philippines, and there are all these practices of incorporating scrap textiles into woven rugs or even just, like, every sour cream tub becomes a new cup or storage container.

Exactly. My family and I are immigrants to the UK. We're all first-generation from Nigeria, and I agree. It's always been like, Be resourceful, don't waste things, be conscious about what you're using. The plastics, we save them all.

What does the space where you work look like? How is it set up?

Do you like to listen to anything while you're working?

Yeah, I listen to music or podcasts. One podcast I really love is Business of Hype, by Jeff Staple and Hypebeast. There's no new episodes, I don't think, but I still listen to the old ones. It's just so motivational.

Are there different materials that you're interested in trying out next?

I'd like to keep going with this home office sort of concept and try different digital hardware components like chips or other things. And I want to start doing official collaborations with brands. Those are a few things I want to achieve this year or next.

Yeah, I've actually reached out to companies to source their electrical waste. Some of them have been open to it. We'll have to see!

For other people who are interested in trying to follow your lead, upcycling tech waste or shoes or bags, is there an easy, accessible way to start doing this?

Just start with the old stuff in your wardrobe or stuff that you were planning to throw away. That's what I did. Plus, I think it's also more authentic when you have a connection to the items already.

There's making stuff, and then there's letting other people see what you've made. How does someone get over a hesitation to share?

I think it's natural to feel shy or scared of what other people will think when you put something out there that maybe people haven't seen before. But at the same time, you can embrace that feeling. You just have to welcome all the types of feedback you're gonna get, whether that's positive or negative, and embrace that it's actually getting people's attention. Sometimes I still get nervous to post what I make, but I'm so glad I didn't let it stop me before. I was really nervous about the cable heels actually, so what I did was, I posted it, and then I just went off Instagram for a couple of hours. [Laughs] I mean, so that's one method if anyone else wants to adopt it.

You just post, and then, throw your phone into your couch!

You're always gonna be nervous, but you just have to jump over it a little bit and embrace the outcomes because you literally never know what could happen.

On the Up: How Psychic Outlaw Transforms Family Heirlooms Into Beloved Fashion