And her time on The Bachelorette, of course.

I hate to use this word in this year, but there's no other way to describe it: Tayshia Adams' laugh is infectious. Actually, it's way more than just her laugh. She's warm, quick, and knowledgeable (which isn't exactly surprising after watching her shine through three Bachelor franchise shows including as the Bachelorette herself) but it's still a joy to experience firsthand. As the first biracial woman to star as the Bachelorette, Adams is both trailblazer and an overnight role model but to hear her tell it, in her bubbly Orange County accent, she just tries to be the best version of Tayshia possible and let the rest follow. So after successfully departing the show with a ring on her finger and fiancé Zac Clark on her arm, all that was left was to start her empire. Now co-host of top-rated podcast Click Bait with Bachelor Nation, Adams dishes on pop culture headlines (when she's not making them, of course). She's also done guest-hosting gigs on Entertainment Tonight, acts as an influencer partner for top brands like Ritual and Smirnoff, and still has time to share some workouts, nail inspo, and home decor tips with her near-2 million Instagram followers.

Adams just moved to New York City with her fiancé, making her officially bicoastal for the first time in her life. We caught up with Adams herself to grab some of her top beauty, hair, and motivation tips for staying on top of such a busy life, plus her thoughts on this crucial moment in representation.

As a now-bicoastal woman between New York and L.A., do you like to change up hair and skin products depending on where you are? Is there anything in your routine you keep consistent?

It's so funny because I've lived in California my whole life and never really had to adjust to this weather but it's definitely changed since moving here [to New York.] It's drier here, so I've definitely had to learn how to care for my skin now that I'm not by the water all the time. I have my serums, which I've raved about time and time again but honestly make me so excited, I think about it in my sleep! [LAUGHS] I love the Blemish & Age Defense Serum by SkinCeuticals ($92), I can't rave enough about that. SkinMedica also has a really good sunscreen and that's something I use time and time again because it doesn't have an overcast on your skin which is really important for someone who has some melanin like me. The one thing I've added to my routine that's even more hydrating but also helps with skin texture and not breaking out is the SkinCeuticals Hydra Balm ($23). I'm talking life-changing. It looks just like Aquaphor, like a thick, clear, gel thing but if I do have a breakout, it helps with that as well.

What are your tried and true hair products for care and styling? Any deep or professional treatments you swear by?

I will say that I'm obsessed with Kérastase Masqueintense ($56). The label says to keep it in for five minutes but I sleep in that baby and my hair will be so freaking soft the next day. I also really, really, really love the Olaplex Number 6 ($28), the bonding treatment. It's so good. Those are probably my ride-or-die go-tos. If I'm traveling, I make sure I have the Mask Intense before I have to give myself a good blowout. I also love a good Moroccanoil hair oil ($44), I think it just makes my hair really soft. I was recently introduced to this other Kérastase product and started using it around four weeks ago and it's so good—it's called the 8H Magic Night Serum ($56). It smells really good but it's also really bomb for your ends. I don't know what it smells like, I want to say...honeysuckle-ish? I know it says to use it at night but I started doing it just throughout the day, at night, in the morning. I don't know, it just really softens! I love it. 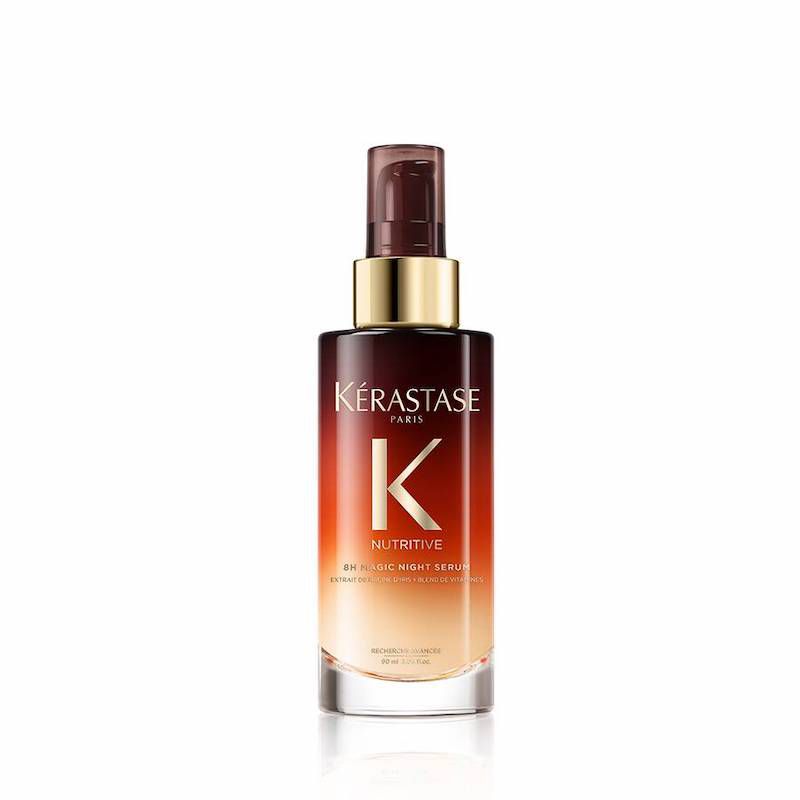 Representation is a hot button topic, especially in the beauty industry. How do you feel the industry is doing and where would you like to see it go?

I feel like as of recently, I'm happy to say that my social media feed has definitely been more inclusive, at least from what I've seen. I've just seen so many more brands start to be more real. And real is every ethnicity, it's not just one. I've started to see that a little bit more on my feed. Not Photoshopping things, showing imperfections, being realistic as to what the body looks like and what we look like because comparison is very detrimental to mental health. I think it's so impactful for the younger generation to see what real is. It's the first thing we can really change and it's not something that's hard to change, it's just not taking that extra step to create perfection.

How do you like to stay active? Any favorite workouts, any you do while traveling back and forth?

I'm not gonna lie, that is something that's so hard to stay on top of. One thing that's easy is just going on a run. There are 10-15 minutes I like to find on YouTube that I will do. I always make fun of myself because I'm just grooving to these YouTube videos alone in my room. [LAUGHS] But at the same time, that's what I kind of need. I need some relief, especially while traveling, just to get my mind right and thats something I find myself doing. And then you can belt out the song and not feel bad about it!

Any beauty tips you've picked up from being on different sets/from different makeup artists over the past few years?

Of course, this is going to sound so cliche, but skin prep is everything. I feel like it's so important to make sure you have all the moistures and all that kind of stuff you need for flawless skin when your makeup is applied. And I always say, "Can I put my serums on? Can I put my moisturizer on?" before anybody starts and they always encourage that. The other thing is less is more! Nobody wants to look cakey, so I feel like just use the bare minimum. If your skin doesn't need a lot of makeup, don't put a lot of makeup on it. If it needs makeup, put it just where it needs to be instead of putting it all over. Highlighter has also become one of my friends. I never used to be a highlighter girl but once you find the right tones for you, it's a game-changer. The Bronze Sands Palette by Huda Beauty ($45) is a really, really good palette. It has a bronzer, a highlighter, and a blush and it just has the best tones. 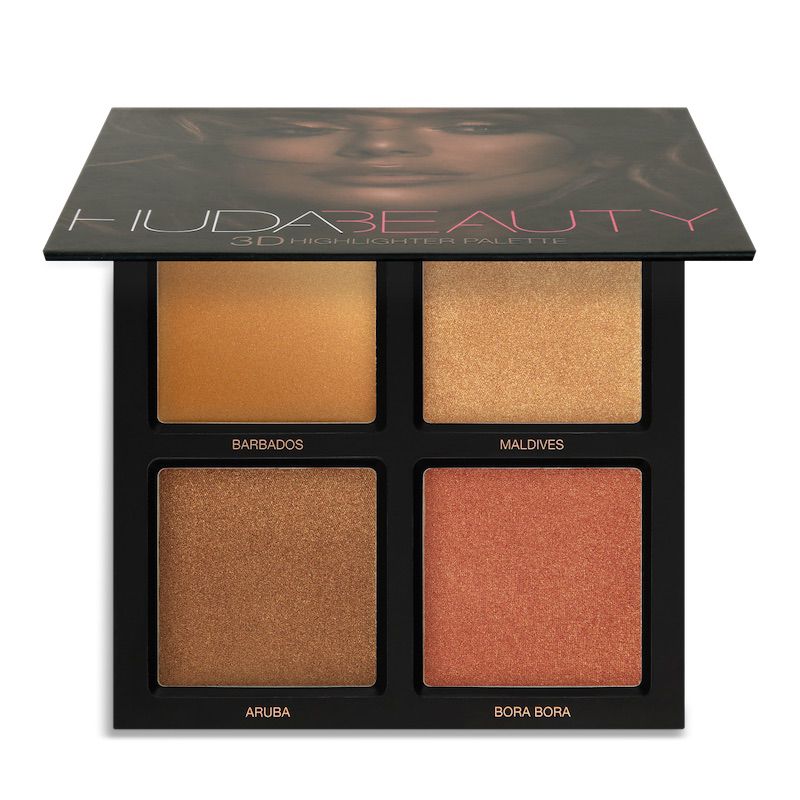 How do you like to look after your emotional and mental well-being? What does self-care look like for you?

For me, it's either working out for a little bit even if it's something as simple as 10 to 15 minutes or just walking outside and getting a little bit of sun. Zac has recently gotten me into meditating more in the morning, it's something that's really hard for me to do but we're doing it gradually. I started doing 5- to 7-minute mediations and it really helps.

You were the first biracial woman to star in one of the iconic shows of all time. What were your feelings on that trailblazing when the show first aired? Have they changed now with some distance from it?

When I first became the Bachelorette, it was very emotional for me because I put a lot of pressure on myself. But also it was also an unspoken pressure because no one told me, "Hey, you're going to be impacting all these people." It was me looking inward and be like, "Oh my gosh, I'm going to be on a TV screen [and] so many other people who look like me can be represented." I don't think I realized the impact I made until after after when a lot of people had viewed the show and so many people messaged me. Whether it was moms who are in a mixed-race relationship and have mixed-race children and can't speak on the other race and trying to do their very best, or little kids who see themselves in me. The impact has been insane and I feel so honored to be the person to do that.