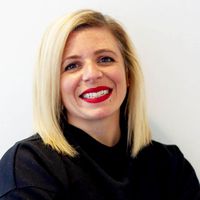 Jen Polzak is a certified personal trainer who has been in the fitness industry for over a decade, specializing in nutrition coaching, post-rehabilitation exercises, and weight loss.

It takes me all of 30 seconds after meeting Taylor Hill to realize she isn't like any other It girl I've ever met. She's breezy, funny, and most significantly relatable. Not the ultra-curated, veneered, I went to In-N-Out after this major red carpet, and look, here's the Instagram to prove it kind of relatable, but actually relatable. For example, during our 10-minute chat, I learned that Hill played saxophone and clarinet in her high school marching band, harbors an undying love for Flamin' Hot Cheetos, and is incredibly proficient at birdcalls. Given that the 20-something has seen her career skyrocket to astronomical heights over the past couple of years—hell-o, Victoria's Secret—it's remarkable and refreshing to learn that she's so grounded in the whirlwind.

"I think it has a lot to do with who you surround yourself with," Hill offers as an explanation. "I have a really big family and great friends, and I just like to surround myself with them and try to keep as normal of a life as I possibly can." (Hill's family lives in Colorado, where she grew up and was discovered—in a barn—at age 14.) "Fashion month is exhausting, and that's probably when you become the most unlike yourself," she says. "It's always really refreshing to go home and see your friends and know that your life's not that hard and it's all going to be fine."

You should always be humble, be kind, be yourself, don't take it for granted.

Of course, it helps that she has friends and mentors to guide her while on the job. Modeling may have a reputation for being a cutthroat gig—especially for fresh faces—but Hill insists that she immediately bonded with some of the more seasoned Victoria's Secret Angels. "They're such kind, smart women, and that's something that you can easily connect with. When I met all of them, it was instantly like, Oh my God, these people are amazing. All of them give us great advice and even the newer ones—like Jasmine and Martha—they've worked with Victoria's Secret for three or four years before they were Angels, they all just kind of say the same thing: You should always be humble, be kind, be yourself, don't take it for granted."

Being a model has helped me embrace my body type. It's hard on some girls, but it actually helped me a lot.

Interestingly enough, the industry also transformed the way Hill saw her body for the better. After all, it wasn't until she began modeling that she learned to celebrate her lanky 5'9" frame, which had been a source of grade school bullying. "I used to hate my body, and I thought I was really ugly," she admits. "I was so not confident, and becoming a model—and especially a VS girl—has changed my perspective on who I am. It's kind of given me a new light: You're beautiful no matter what you look like, no matter what body type you have. I always envied curvy women because I wasn't that. The grass is always greener, and you'll always have to deal with that. But being a model has helped me embrace my body type. It's hard on some girls, but it actually helped me a lot."

On Her Diet and Workout Plan

Of course, her lingerie-centric main gig requires some fine-tuning, and Hill eats and works out accordingly—which has turned out to be yet another learning experience in itself. "I used to do a lot of weight training, lifting, and things like that," she says. "It was really difficult, which I liked, but then I realized I wasn't getting the results that I wanted. You have to drink gnarly protein shakes and all of that to build that muscle, especially when you're as tall as me. I'm like; I can't develop muscle; it's just not working!" Nowadays, she's a fan of one-on-one sessions at ModelFit. "I have to use a trainer because I cheat in classes," she admits. "I'm a natural-born cheater. I cheat on everything—I cheated on tests (don't tell my teachers), I cheat workouts, I eat whatever I want! So I just needed someone to watch me and make sure I'm doing it correctly. When I have an hour, I want to give everything I have to that hour, like, really work out.

"We do a lot of slow, muscle-targeting movements with gliding discs and two-pound weights. Almost kind of floor Pilates in a way because we get on the floor, and she puts resistance bands around my ankles and things like that. It's so hard—it doesn't sound hard, and it doesn't look hard, but I could back squat, like, 85 pounds, and I quiver when I do this. I'm like, Oh my God, I can't stand up anymore because I'm so sore! It's amazing."

Working with a personal trainer is a great way to get a workout routine tailored to you and your goals. You'll also decrease your chance of getting injured thanks to your form being on point.

On Her Skincare and Beauty Routine

Still, getting in shape is just one part of the equation, and I wonder aloud how Hill keeps the skin on her arms and legs VS-ready. "I like to use scrubby gloves three times a week in the shower—they're like little loofahs you put on your hands. I also love Victoria's Secret's Coconut Milk Weightless Oil [now discontinued, though they have a new coconut oil available], specifically because of the scent—you don't get that with the coconut oil you buy at, say, Trader Joe's." As for her face, her regimen is fairly low-key: She swears by CeraVe's Foaming Facial Cleanser ($16) to keep makeup-related breakouts at bay. "I use it in the shower because my dermatologist told me it's good to wash your face in there—the steam opens up your pores, and it really gets in your skin," she says. "When I get out, I splash my face with hot water and then again with cold water."

It's time for Hill to return to her hotel—speaking of whirlwinds, she was on the tail end of a trip to L.A. to promote a new Victoria's Secret bralette—but I'm not about to let her escape without first demanding the secret to Those Brows. As my rational brain could have guessed, the answer is simple: It's genetics. (A part of me might have hoped that the model uses some top-secret growth serum or supercharged biotin, but no dice). "I just try and make sure that I don't let anyone pluck them too much because I used to not do anything to them at all, and they grow out really crazy," she says. "A lot of people want to pluck them and shape them or make them something, but it's better for me and my face to just let them be."