This New Primer Is Basically the Blur Tool IRL

written by
Sarah Y. Wu
Sarah Wu is a contributing writer for Byrdie. Previously, she was the beauty features editor at Teen Vogue. Her writing has appeared in Forbes, Refinery29, and more.
Byrdie's Editorial Guidelines
Sarah Y. Wu

I have a very short attention span when it comes to makeup primers—mostly because they pair well with foundation and my 11-step skincare routine usually allows me to skip that step. It’s only when special events arise (or days when HD cameras are involved) that I go rooting around under my bed for a suitable primer and base combo. Typically, I’ll see a promising one, use it twice, and forget it ever existed. But when I heard that one of my favorite skincare brands was releasing an upgraded version of their popular primer, I was intrigued. And Tatcha's Liquid Silk Canvas Featherweight Protective Primer is so good, it’s not even hiding out under my bed with the rest of my primer graveyard anymore. Ahead, my honest review.

BEST FOR: Any foundation formula and all skin types

ABOUT THE BRAND: Tatcha is known for its glow-boosting skincare products inspired by Japanese beauty traditions. The range is based on their Hadasei-3 complex, which incorporates green tea, rice, and algae.

About My Skin: Combination with mild rosacea and breakouts

My skin type is combination; I tend to be dryer around my nose and cheeks, where I also have mild rosacea and redness. I get regular hormonal breakouts on my cheeks and chin, although they’re usually contained to one or two pimples at a time. Because of this, I also have some lingering dark marks and hyperpigmentation from the previous month’s batch of breakouts.

That said, my extensive skincare routine has also gifted me with an overall skin texture that has alternately been described as “unbelievably glowy” and "this is unfair," so I rarely wear foundation or concealer unless I’m breaking out badly or being photographed. When I do wear foundation, it’s important to me that it evens out my skin without being detectable; I still want that 11-step glow to shine through. 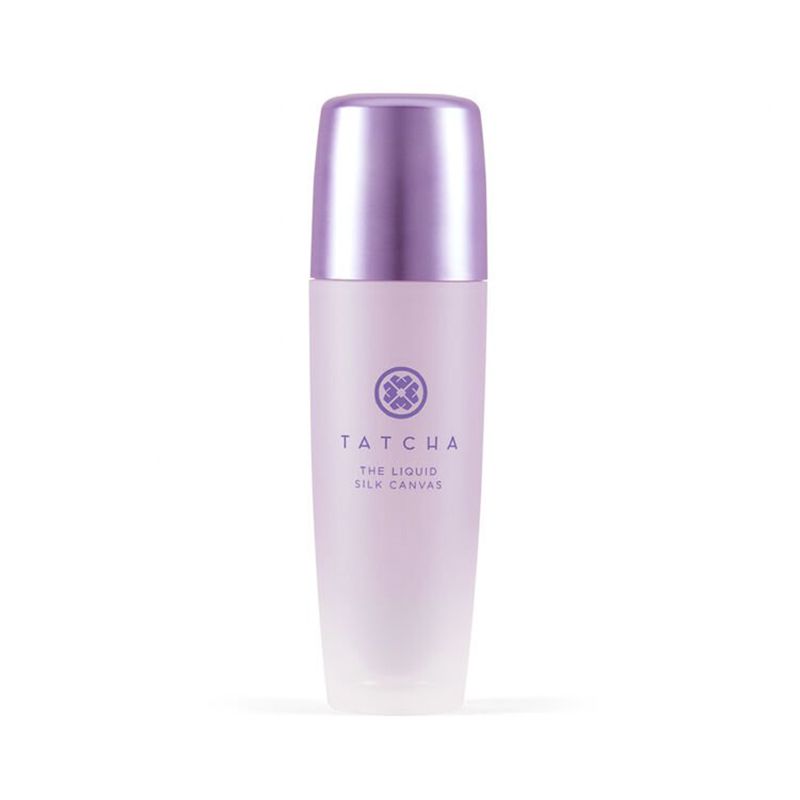 One of my favorite things about Tatcha is they formulate their makeup with a skincare-first mindset. Here, this means the inclusion of their signature Hadasei-3 complex, a blend of green tea, algae, and akita rice. Green tea is rich in antioxidants that have been shown to have a photo-protective and sebum-reducing effect when applied topically. Marine algae has been linked to improving hyperpigmentation. It’s also rich in polysaccharides, an ingredient proven to retain large amounts of water. Akita rice rounds out the trio with nourishing properties; applied to skin, rice has been shown to exhibit antioxidative qualities.

The formula also features silk extracts in three parts: fibroin, sericin, and silk powder. Together, the trio creates a blurring effect on your pores and helps create the seamless base for your foundation.

This primer is non-comedogenic and formulated without parabens, synthetic fragrances, mineral oil, sulfate detergents, phthalates, urea, DEA, or TEA. However, it doesn’t meet Byrdie’s Clean Beauty Pledge due to the inclusion of PEGs (polyethylene glycol). PEGs are on our list because the process of making them includes ethoxylation, which produces 1,4-dioxane as a byproduct, a potentially carcinogenic ingredient according to the National Toxicology Program. However, they can be considered safe for cosmetic use if the contaminants have been stripped. We reached out to Tatcha to confirm this, and here's what the brand had to say: "The PEG materials in our formula are safe for use and do not contain contaminants—they are rated as low risk (1-3) on the EWG chemical rating system."

For those who don’t set a calendar alert for every Tatcha launch like I do, The Liquid Silk Canvas is actually a new, oil-free version of their much-hyped Silk Canvas, which became Sephora’s top-selling primer. The main difference is that while the latter is solid and requires you to scrape off small amounts with a very chic, Tatcha-emblazoned metal disc, this one is liquid (and therefore way easier for me to use).

The sleek, purple bottle was heavily influenced by celebrity makeup artist Daniel Martin, who personally requested that it include a pump applicator. Having extensively tested the previous formula, I expected the contents of this one to dispense as a thicker paste. But Tatcha truly liquified their base formula and it comes out as a pale pink, runny lotion that magically transforms to a dry-touch velvet finish as soon as you begin patting it in. The way it feels once it’s absorbed into my skin is just like the original Silk Canvas—an ultra-smooth, featherweight veil that transforms my skin’s surface into an eggshell-esque base. I only need the tiniest pump, smaller than a pea-sized amount, and my fingers slip right across my face like ice skates. At the same time, it doesn’t have that gummy, slick feeling that I detest so much from heavier makeup primers.

This is not a strongly scented product. My nose does pick up some faintly powdery notes if I put it right up against the pump, but I don’t notice it upon application.

The one thing I must stress about this primer is that you need to pair it with a foundation to appreciate the results. Yes, your skin will feel like actual silk once you apply it. Your pores will look a little more blurred and there will be slight hints of gentle glow. But if you want to witness the full effect, you need to add something over the top. I’ve found the formula type doesn’t matter; anything plays well with this as the base layer. For the purposes of these photos, I went in with half a pump of Liquid Silk Canvas, then applied a sheer layer of Bobbi Brown's Skin Foundation Stick using my fingers. Let me emphasize: This is very little product.

As soon as any foundation meets this primer, I can see the texture instantly change. The result is that no matter how closely I inspect my face in the mirror (or how much I zoom in to a photo), I can’t detect traces of makeup, even where it tends to clump or flake over my dry patches. My skin just appears to be completely seamless and even—and also emits a luminescence that has caused many people to DM me asking for the exact details of my skincare routine. I’ve also noticed that, as any good primer should, this extends the wear time of my foundation and prevents it from fading or migrating all over my face. Strangely, when I wear this, I start looking increasingly glowy as the day goes on, although that might just be the addition of my sweat mixing in with the primer-foundation blend. Whatever the case, it works.

The Value: Worth it for anyone who wears foundation

At $52 for 1.0 oz, this primer is pricey. But I’ll argue that you need such a tiny amount each time, the cost per wear is worth it, even if you’re a daily foundation user. I’ve tested this with cream, liquid, cushion, and powder foundations, and it’s made each one look, wear, and feel noticeably better. I also appreciate there’s a skincare component that makes it far more comfortable to wear than other primers I’ve tried. It’s not meant to sub in for your skincare products entirely, but I like that it moisturizers my skin while creating a protective layer against pollutants and underneath makeup.

That said, if you don’t wear foundation, it’s obviously not worth the splurge; this is a product that’s meant to enhance your base makeup rather than be worn alone.

Tatcha The Silk Canvas Filter Finish Protective Primer: The original potted version of Liquid Silk Canvas is the only formulation I can think of that truly comes close. I love the results of this velvety primer (the final look and feel is exactly the same once it absorbs) and how beautiful the packaging is, but I’ll confess that my lazy habits are better suited for the liquid edition.

Son & Park Beauty Filter Glow Cream: Another skincare-focused primer I love is this version from K-beauty brand Son & Park. It illuminates and hydrates skin without clogging pores, and it’s particularly great if you’re prone to breakouts. It’s packed with botanical extracts and controls oil—think of it as a moisturizer that gives a glass skin effect and helps your foundation look more dewy. However, I do get longer wear time with the Tatcha primer.

Our Verdict: Run and buy it

Tatcha's Liquid Silk Canvas Featherweight Protective Primer is designed to convert anyone who thinks they don’t need primer. And sure, you don't need anything, but here's the thing: Not only does it make my skin feel amazing, it also gives it a look that can only be described as otherworldly. If you wear any type of foundation or BB cream, it will only get better paired with one pump of Silk Canvas.