As I look back on one full year of global pandemic, I can list off countless lows but would be remiss to not stack up the silver linings like bangles, even the small ones. One of the biggest lessons I learned was how much I should value physical health, taking the time to look after every part of me from my teeth to my skin to workouts and meditation. That extended to sun care, which I began paying serious attention to for the first time last summer. (I went to college in Texas in the mid 2010s, which, for the layperson, means tanning was basically held in the same regard as communion.) In an effort to reverse or even just offset some of that youthful damage, I practically bathe in sunscreen. Never did I think anyone could top Unseen Sunscreen ($34), arguably the Supergoop!'s signature product, until...well, they did.

Sheerscreen SPF 30 ($38) is the mineral counterpart to my beloved Unseen Sunscreen, casting a powerful barrier across skin with 100 percent mineral content. Not only is the Sheerscreen protective against UV and blue light damage like its sister product, it also acts as a primer for makeup, albeit one of a different formula. But to realize just how revolutionary the virtually invisible product's technology is, we first have to understand traditional constraints on mineral sunscreen.

"Mineral sunscreen can be very heavy and very chalky because you're dealing with mineral sunscreen actives," explains Sofia Gracia, Supergoop!'s Executive Director of Product Development. Because active ingredients from mineral sunscreens are just that, minerals, they arrive as powder before being reformulated into the traditional white sunscreen you probably grew up with. But if mineral sunscreen conjures cartoonish images of a zinc-white nose, one application of the Sheerscreen will change that perception forever. "We wanted to deliver another mineral option for those who wanted something very basic, so to speak, that would give you a very natural finish, that's very weightless, very undetectable," Gracia says. "It's so blendable and almost has almost a watery texture that melts into the skin and disappears." 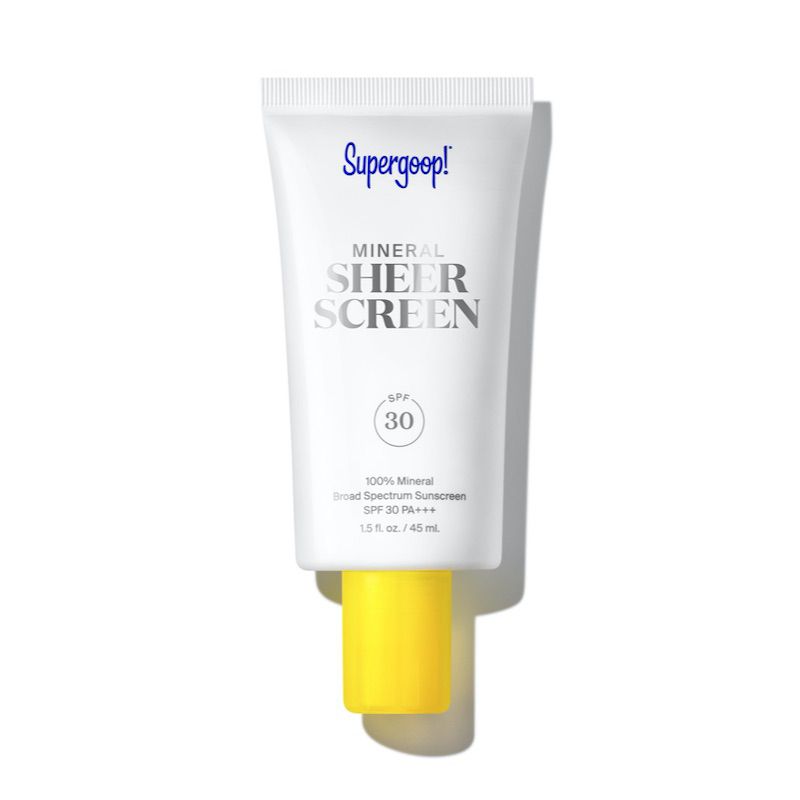 That texture makes the Sheerscreen ideal for wearing under makeup, with a silky-satin consistency reminiscent of other mineral-based primers like Hourglass' Veil Primer($54), of which I'm also a huge fan. When first applied, the Sheerscreen does come out white and requires some fingertip blending but I've found that it almost neutralizes some of my redness which is an extra incentive to apply it in the morning before makeup. Gracia says Sheerscreen makes a great base, but suggests letting all sunscreen fully dry before applying makeup to allow it to form a barrier of protection. That's how a mineral sunscreen, also known as physical sunscreen, works: the light-blocking minerals form a literal shield that reflects UV rays whereas chemical sunscreens convert and diffuse those UV rays into heat. While they usually come down to lifestyle or even daily differences (chemical is better for sweating), there there are some serious bonus benefits to selecting a mineral-based sunscreen formula: the active ingredient, zinc oxide, is gentle on sensitive skin and a soothing natural anti-inflammatory. And according to Gracia, "People who have reactive skin or acne-prone skin, the zinc oxide is a soothing agent and tends to work better with those skin types."

Sunscreen is a part of skincare, though, and just as you can tailor your skincare routine to your individual needs, you can play around with different sunscreen formulas and iterations to find a combination that works best for you. For an outdoor run with a lot of sweating, you might prefer a chemical-based sunscreen. On days when your skin needs a break, it could be time to apply the Sheerscreen. Gracia even tells us that "the best thing you can do is actually layer both [sunscreens]." It's a wise choice considering the sun isn't the only culprit behind light-based damaged these days. If you've seen a lot of information and warning about blue light damage from screens, it's probably for good reason. "For every four 8-hour workdays...that is equivalent to 20 minutes of sun exposure if you were sitting outside in the middle of the day at the peak of UV effects," Gracia says. Frequent reapplication of sunscreen, even inside, is the best bet for stemming the damage that can worsen hyperpigmentation and free radical damage.

For as simple and user-friendly as the Sheerscreen is, the journey to the final product wasn't exactly an easy one. After the introduction of Supergoop!'s first mineral sunscreen 12 years ago, the team has been on a mission to perfect it down to the silky, barely-detectable formula sitting on my skin as I type on. "The technology that we're using in this particular formula, our Sheer Matrix technology, what we were able to do with this particular product was loosen up the weave of how tightly packed all those mineral sunscreens are." Essentially, the fabric of the sunscreen was stretched to make it feather-light, but that doesn't mean it skimps on the coverage. "We're talking microscopic," Gracia explains. "We're always staying on top of the latest ingredients and formulation technologies so we can push the boundaries with mineral sunscreen," Gracia says. "And I think with Sheerscreen we did just that."

Doing a 180 from a person whose sunburn philosophy used to be "it'll fade into a tan!" to one who reapplies sunscreen even while flicking through TikTok on the couch feels like a wild turnaround, but it's just a testament to the power of one...dare I say it..super goop.

What Does SPF Actually Mean, Anyway?