Eyeliner is to our makeup routines as snacks are to a good Netflix binge. In other words, it's a necessity. Especially for those of us who don't have naturally full and voluminous lashes. Applying a single stroke of black along the upper lash line fakes density and adds definition. Swipe on a coat or two of mascara, and we're good to go. One of our favorite eyeliners to use for this purpose is Stila's Stay All Day Liquid Eyeliner ($22) since it's richly pigmented and creates super-fluid lines. It also stays put, as the name implies. A single application lasts up to 12 hours (and that's not just a marketing claim; it really does just that). For some people, it's an old makeup-bag staple. For others, it's a newly discovered favorite. Either way, it's well-loved by bloggers and beauty editors alike, and it remains Sephora's best-selling eyeliner.

It was news to us when we learned Stila was releasing a new version of this classic eyeliner. We were unsure how the product would differ from the traditional, but after seeing and testing the update, we're totally on board with the changes. 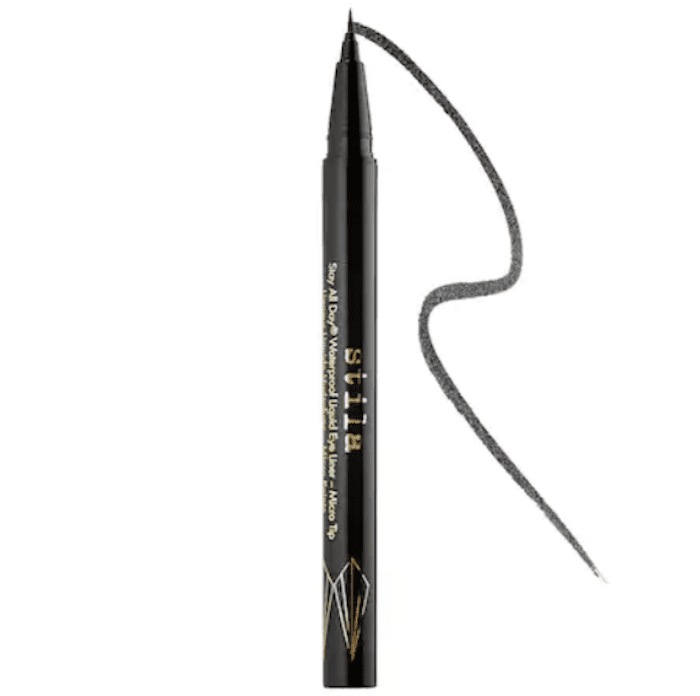 Like we said, at first we were unsure about this news. It's become a fan favorite, so how would the brand improve upon something we already love? We only understood it after we saw, felt, and tested out the new product for ourselves. It's the same formula we know and love but with a more precise and detailed applicator. That's right: The actual formula of the eyeliner hasn't been touched or tweaked at all. (If it ain't broke, don't fix it, right?) The only thing the brand revamped was the size and accuracy of the pen tip. This one is "micro," which allows for superior control. That's it. It's just been updated to provide better accuracy for tight-lining the eyes and creating clean, graphic liner looks.

The only other difference comes with the packaging, though even that is a slight change. The new version of the eyeliner looks extremely similar to the old. It's only distinguished by the gold, diamond-shaped graphics on the bottom of the pen.

If a naturally defined or thin graphic look is your style, you're sure to appreciate Stila's new micro-tip release. If you prefer bolder and thicker lines, however, we suggest sticking with the old version. Thankfully, the brand isn't replacing the old with the new, just adding it onto store shelves as another option for its customers. We think we'll pick up both versions and alternate between them as we see fit.