This Splatter Technique Made Everyone Think My Faux Freckles Were Real

Thanks to the innovative PHreckles Kit applicator.

I've been trying to scam my way into a face full of freckles for about 25 years now. As a teenager, I tried and failed with some brown liquid liner before a dance, only to end up looking smeared and blotchy at the end of the night. And in 2016, with the release of one popular freckle pen, I thought I finally found the product holy grail—until I saw photos and realized I just looked like... well, a girl who tried to draw on some fake freckles.

Over the decades, countless faux-freckle products have entered the market, and most of them miss the mark with odd-shaped applicator brushes and dry formulas. Freckles are often described as a smattering: small, inexact, randomly placed. But, trying to mimic randomness seems like an impossible task.

The creator of PHreckles might have the answer. Created by Pseudo Labs and its founder Brooke Hanmer, PHreckles ($38) uses a waterproof formula, several shades, and one unconventional application technique to deliver the most natural-looking freckles I've ever tried.

The PHreckles origin story unfolds, like all the best ones do—when the founder least expected it. According to Hanmer, she was in a rush to get ready when her brown mascara splattered from the applicator wand onto her face as she pulled it from the bottle. Pleasantly surprised by how natural they looked, Hanmer left them on for the rest of the day. The rest, as we often say, is history.

Intrigued by the natural patterns and effect of the splatter, Hanmer set out to create a controlled version of her accidental faux-freckles, which became a long, complicated process for the first-time product developer. "After landing on a spectacular set of chemists, weeks of over 50 formulations, months of component tooling and configuring, years of learning, sweat and tears, a major rebrand, and another year of doing it all over again, PHreckles was finally born," she tells us. But despite the lengthy, daunting process, the final product is well worth it—especially considering the thoughtful design and packaging.

PHreckles comes housed in a sleek, white button-close sleeve that contains the product, applicator, and a slot for the all-important flicking stick. After shaking up the waterproof formula, users pull the wand from the tube and hold it upright, allowing any excess to run back into the cap. From there, hold the ball-bristled wand parallel to the application site and use the enclosed plastic stick to flick the bristles.

The results are far more realistic than you'd get attempting to dot on each individual freckle (though the stick's fine tip lets you do that too). The idea is to mimic freckle clusters with random variations in size and spacing that you'd typically find in nature. You can also lightly press the drying spots with your fingers to fade them if you want a more subtle effect.

There are three shades of PHreckles currently, all universally flattering on a variety of skin tones but made for different degrees of intensity. For a daytime look, many will be into Shade 01, a ginger-hued formulation for subtlety. On the opposite end of the spectrum, cool-toned Shade 03 stands out the most on all skin tones. "While shades may appear different on various skin types, you can easily use all three to create a look that has more dimension, or just keep it simple with one," Hanmer explains, adding that the website has a shade-finder tool to match PHreckle colors with lifestyle needs.

The two-hand, hold-and-flick approach does take some getting used to, but it'll feel intuitive soon enough. And honestly, even if it didn't, I wouldn't care—I like how these look that much better than traditional dab-and-dot models. And the 80-minute water-resistant formula gives me significantly more confidence wearing these around over summer.

Because it's so hot in Texas, just walking outside becomes a waterproof test, and the formula passed with flying colors. After a 15-minute walk in 90-something heat, I was pleasantly surprised to see all my applied PHreckles were still in place and hadn't slid around as I feared.

I even wrangled the ultimate faux-freckle compliment from one of my most discerning friends: "Have you not been wearing sunscreen? Why are you suddenly freckled?" I let him in on my little secret (all two dozen of 'em) because heaven forbid anyone thinks I've been skipping the SPF. 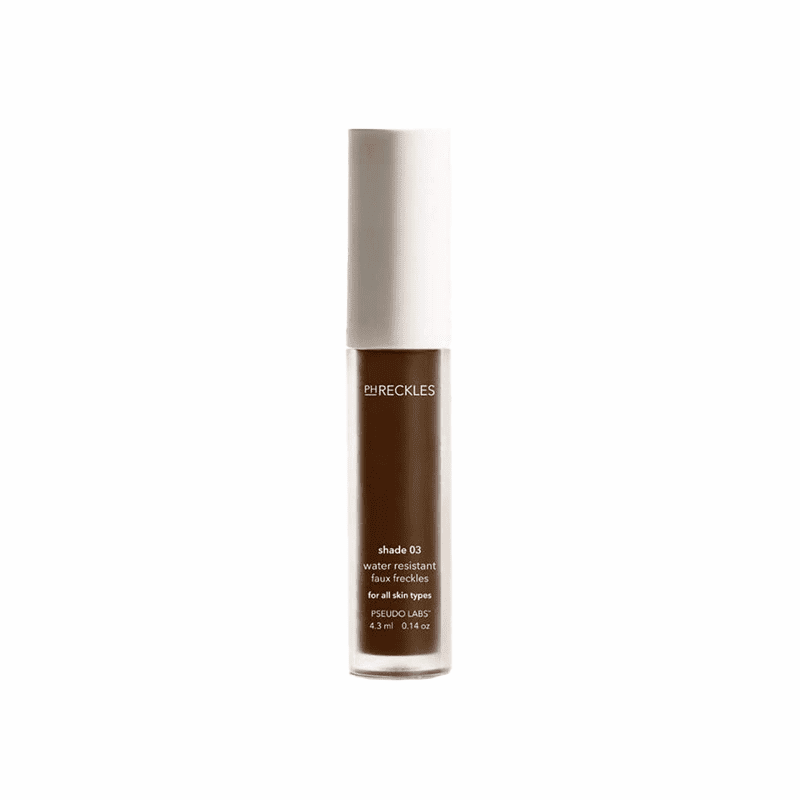