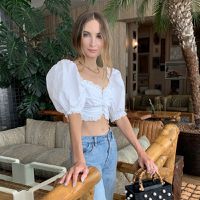 The Inspiration How to Use It
My Review

According to the CDC, one out of three adults doesn't get enough sleep. I'm one of them. For as long as I can recall, I haven't been able to sleep eight hours without a bit of help. I've tried everything from natural solutions like melatonin (which didn't help) to prescription sleep pills (the most effective method for me). While the latter always works, there's a 100% chance I'll wake up groggy.

I'd nearly given up on falling asleep naturally when I was asked to test the Somnox 2, a sleep robot born out of the Netherlands. As someone who's not typically big on techy gadgets, I wasn't sure how I'd fare with the four-pound bean-shaped sleep companion. It's designed to gradually slow your breathing as you synchronize with its steady, slow rhythm. "Somnox helps users sleep better by working [to bring] about a sense of calm that helps promote quality, restful sleep," describes the inventor Julian Jagtenberg. For two weeks straight, I gave, what I fondly started to call, my new snuggle buddy a solid try. Ahead, learn more about the Somnox 2 and my experience using it.

The Somnox device is unlike anything I've ever seen or heard of. It's clunky but cushy—covered in a soft, blue fabric with a memory foam layer underneath. "It was inspired by the shape of a baby's body, and the soothing effect mirrors holding a baby in your arms," explains Jagtenberg. It has a hollow center that fills and empties air, mimicking the breath pattern of a living being. The embedded speaker plays an array of soothing options (think: mesmerizing soundscapes and nature sounds.) It's easy enough to operate–there's an on-off button, and you can adjust the volume up or down.

As of now, there have been two iterations of the nighttime bot, with the first version coming to life via a 2017 Kickstarter campaign. "During this time, I stumbled upon many research papers that suggested that through slow-paced controlled breathing, you can reduce stress and anxiety and accelerate the process of falling asleep," explains the inventor.

The initial version was essentially an overnight success–raising $250k in 30 days. "We could see the need for quality sleep as the response was overwhelming," notes Jagtenberg. Thus what initially began as an academic project organically turned into a globally distributed retail brand. Fast forward four years, and this updated newer model comes with a few tweaks. For starters, it's smaller and lighter, has longer battery life, and has a refined speaker system. Pretty neat (aside from the $600 price point).

I am not a tech-savvy individual, and the fact this device paired with an app initially made it less appealing to me. But, it took less than five minutes to set up. I was relieved to learn that it was extremely user-friendly (and trust me, that's saying a lot coming from me). For starters, you have to charge the robot and download the app. Once you turn it on, it starts to breathe (yes, you can feel the physical sensation of falling and rising breath), and sounds begin to play from the speaker. The app offers a variety of breathing exercises that you can tweak according to your preferences. Listening options include white noise, soothing sounds, or guided meditations.

If bringing the Somnox to bed with you feels daunting, you can use it as a meditation tool instead. "[You can] use the Somnox device for 10-20 minute sessions and create a moment of calm," advises Jagtenberg. Depending on your mood, you can use it to calm down or even boost alertness during the day, but note that its primary function is to prepare you for a restful slumber.

Full disclosure: I typically sleep between two pillows and tend to pass out on my side, straddling a huge body pillow. On top of that, my cat, Pancakes, always pops in throughout the night to aggressively snuggle under my arm. So, needless to say, the Somnox device had a bit of competition in terms of bed real estate. As for settings: I didn't mess around too much. As a default, it starts with a breathing pace of 12 breaths per minute, then steadily decreases to six. It also uses a 1:2 ratio, so the exhale is twice as long as the inhale. When I focused on these deep breaths, I was able to fall asleep faster. Did I stay asleep? Sometimes yes, sometimes no.

Here's the thing: Yes, the Somnox 2 did make a noticeable difference in my sleep patterns. However, $600 is a big chunk of change to spend on a sleep device. While the Somnox 2 did help me to hyper-focus on the depth of my inhales and exhales (which were previously quite shallow), a handful of affordable meditation and sleep apps aim to do the same.

I did, however, appreciate the unique experience. Having a bot that moves with you as you breathe is an incredibly soothing and efficient way to enhance your breathing. So if you've got the cash, are into tech gadgets, and are willing to use it consistently, I'd certainly say the Somnox 2 is worth a try.