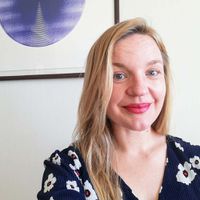 Agnes Erickson
Agnes Erickson is a freelance writer covering fashion, food, and travel. She has contributed to Byrdie, The Local, The List, and Health Digest.
Byrdie's Editorial Guidelines

What Is Street Style? What Is Sofa Style?
The Research The Bottom Line

The ever-evolving pandemic has left us working from home and tentatively making, followed by permanently canceling, plans for weddings, parties, and social gatherings. Through all of that, the way we get dressed and buy clothing has changed too. Street style has moved aside and made room for what I'm coining as "sofa style" to become the new sought after way to dress. It's easy to roll your eyes as you read this from home—on day three of wearing the same pair of leggings—and answer "well, duh." But before you do, let's take a closer look to see if sofa style may replace street style for good.

What Is Street Style?

Street style implies you have somewhere to be—you wouldn't be walking down the street if you didn't. And, yes, that includes grabbing a coffee or picking up groceries. What you're wearing is still a choice, and a reflection of how you're feeling (or want to feel). It can be a perfect blend of individualism and what is currently on trend. It is so varied from person to person that it inevitably offers an allure of mystery. Think: Is that person headed to the bodega? A date? Work? Street style works as a way to invite those questions without necessarily offering answers. It's the ideal people-watching accessory.

Street style became a popular term when photos of celebrities in their "off-duty" wear became more profitable to photograph than the glammed up versions on the red carpet. And with the eruption of social media around the same time, showing off your outfit (even when you don't run into anyone at all) became incredibly easy. The virtual thumbs up (or double-tap, save, or share) allows consumers to become their own advertisers, often on a large scale. Which, in turn, made designers from luxury brands take notice.

What Is Sofa Style?

Sofa style, also known as loungewear, is an umbrella term from everything between upscale silk pajamas to those ratty sweats you've worn around the house for a decade. It's a version of something you're likely wearing right now (at least from the waist down). Popular examples of sofa style include leggings, oversized hoodies, soft T-shirts, and lots of elastic waists. It's anything you you'd immediately want to rub your cheek against if you saw it hanging in the store (pre-pandemic of course—nobody should touch anything with their cheek these days.).

Sure, sofa style can be streetwear. But there is arguably an extra-large, sofa-size difference in the fabrics and fits we choose to wear at home (i.e. less bras, almost no jeans—we’re not masochists).

Things are certainly changing. Trend forecasters are calling sofa style "the great loungewear pivot," Last year, Medium reported an analysis taken from over 16,000 retailers and saw a sizable 433% jump in consumer demand for loungewear compared to the previous year. Meanwhile, Vogue Business reported an abrupt halt in the design and production of tailored looks for men. This, and NPR’s headline claiming there was a whooping 79% dive in clothing sales after the first wave of the virus. This is really starting to look like a solid case for Team Sofa.

Spring and fall collections are jumping  into the virtual world for their debuts. No longer are there paparazzi hovering outside the exclusive shows just waiting to snap a photo of influencers using the street as their catwalk before disappearing inside. Designers like Collina Strada have started the trend by launching her spring 2021 collection this past September not in person, but online. Now available for everyone on their couch to enjoy.  The 11 minute video has fittingly taken the models sporting loose fitting clothing off the runway, and into a brightly filtered virtual world. A place we seem to be spending more time in than ever these days.

After extensively interviewing those who moved their work, social, and dating lives to screens in their living rooms, a surprising reality was found. They weren’t so quick to admit they’ve let sloppy become the new sleek. There was a recurring theme that even though they had nowhere to be, it was as important for them to get dressed. "Before the pandemic, I dreamed of getting to live in my sweatpants all day," shares Maddie Harper, 31. "And now that I have the option, I find myself choosing to get a little more dressed up. I’m way more effective when I wash my hair and throw on a belt."

The world has been veering toward comfortable clothes for sometime now. Streetwear has been evolving for decades and startups have offered loose work-from-home policies far beyond the pandemic. That said, the pressures and policies of the pandemic have influenced our daily looks and spending habits, but we haven't completely forgotten about dressing up either. Perhaps these two styles are like tango partners, dancing successfully as one. Only time will tell.