It's a summertime inevitability up there with pool parties, Fourth of July sales, and clothes-soaking sweat: the dreaded sunburn. No matter how diligent you are with the SPF reapplication, sometimes—especially if you're having a lot of outdoor fun—a sunburn manages to crop up on your body. It's an awful feeling and one that leads to itching, peeling, and painful friction with clothes. Typically, once you've been burned, there's not a whole lot you can do but slather on some cooling aloe vera gel and wait.

But one brand developed out of frustration over opaque and sometimes harmful soap ingredients wants to change that. Introducing WILD Organic Skincare's Original Sunburn Soap ($15), an all-natural, skin-safe soap helps soothe and treat sunburns immediately in the shower.

"When you’re burned all you want is less pain, less peeling, and a faster recovery time to get back outside, and that’s exactly what this soap delivers," Angelini tells Byrdie. "We just want people to know that it’s really important to use the right kind of soap when you're burned because the wrong soap will most likely make it worse." Angelini's certainly done the leg work to prove it, too. "After making dozens of batches of new prototypes, we would intentionally get sunburned, just to test out how well the soap worked," she shares.

Seven years of testing later, WILD's breakthrough came this spring just in time for the weather to heat up. The soap's key ingredient, marshmallow root, has been used as an anti-inflammation healer since ancient times, Angelini explains. It minimizes swelling and redness on its own, but mixed with other ingredients like witch hazel, coconut milk, and aloe vera, it stops burns in their tracks.

Sunburns are medically considered wounds, and like all wounds, immediate action is key. Angelini recommends using the soap immediately after sustaining a burn, be it at home or even under a beach shower. For portability, "cut your bar into small pieces and use as needed," she recommends. While the severity of your sunburn will determine how often you use the soap, Angelini says most find relief after the first use—I know I did. After a trip to the coast left me with a mild burn on my stomach, it was uncomfortable to even wear a seatbelt on the car ride home. I carefully washed my burns with the soap and found I could even wear an elastic waistband across the area that evening pain-free. That said, if your sunburn is severe, weeping, bleeding, or blistered, don't apply topical treatments and seek medical attention. But for those more mild burns, the ones you wish you could take back by just crawling under the shade 20 minutes sooner, this is a true game-changer.

Even with this major innovation under her belt, Angelini has no plans to slow down her work. "We are passionate about what we do," she says, "and will continue to raise the bar by creating products that are great for you and the planet." 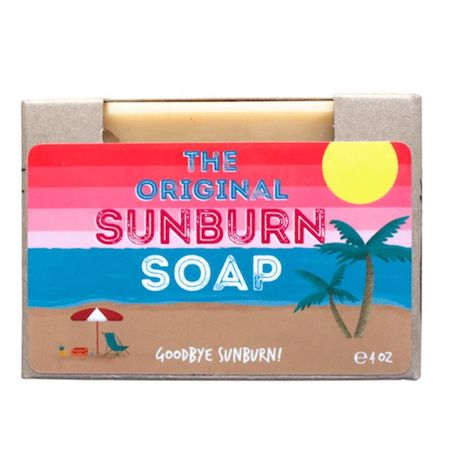 It's important to note that even with burn solutions, it's far safer not to get sunburned at all. Sunburns can lead to premature wrinkles, permanent discoloration, and skin cancer. Medical professionals recommend at least one ounce of sunscreen for all exposed skin, with reapplication every two hours — and cut that time in half if you're swimming or excessively sweating.