Until recently, sleep has never been elusive to me. I used to be able to crash for twelve hours straight, no problem—no supplements needed. Perhaps it’s just a side effect of getting older and generally having more to worry about. Or, maybe it has something to do with staring at my computer and phone screen all day long, or living in arguably the most stressful city on the planet.

According to the CDC and pretty much every single person I’ve ever met, I am far from alone in my bedtime woes: A third of adults in the U.S. report not getting the recommended amount of sleep (at least seven hours). And, as we all know, getting sufficient sleep is key to feeling good and being a productive, happy human being (not to mention staving off a host of health problems like heart disease, diabetes, obesity, and depression). So yeah, sleep is incredibly, incredibly important to every aspect of our lives and well-being.

Whatever the cause of my newfound insomnia, I now find myself perpetually on the hunt for the latest and greatest in sleep-boosting products (and, thanks to Instagram knowing me better than I know myself, I am constantly bombarded by ads for said products in my social feed). But, do I really need them? More importantly, do they really work? To find out, I put six popular products to the test—and was pleasantly surprised by most of them. Here’s my honest review of each one. 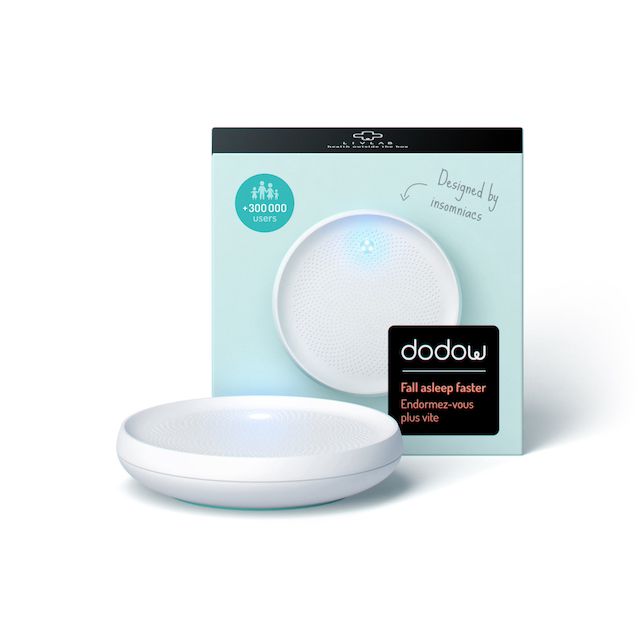 When I projected a bright blue, pulsating light beam onto our ceiling one night, my fiancé had more than a few questions—not least of which was, how would this actually help us fall asleep and/or sleep better? I wasn’t exactly sure either, so I read the included pamphlet aloud.

A third of adults in the U.S. report not getting the recommended amount of sleep, at least seven hours.

Made by a French company called LIVLAB, the Dodow sleep aid device is basically a light metronome, or a pulsating nightlight of sorts, which is meant to help guide breathing and lull you to sleep faster—2.5 times faster, according to said pamphlet. Here’s how it works: You match breathing with the light projection, inhaling while the light expands and exhaling as it contracts. Over the course of either eight or twenty minutes (you can choose your timeframe), the flashes of light become fewer and farther in between, which gradually, and *naturally*, slows down your breathing rate and makes you feel more relaxed.

As instructed, I followed along (or tried to) with the light projection—I opted for the twenty-minute version. First thoughts: I wished that the light projection was a bit more defined, like a smaller-sized circle that I could more easily keep my eye on. As it were, the light kind of spills over, off of the ceiling in a splayed-out pattern that lit up half of my bedroom. Still, before the 20 minutes had fully passed, something in my body shifted. I could barely keep my eyes open all the way through, and I felt a little bit like butter melting into my bedsheets. Not to get too woo-woo, but after an inevitably long workday (in NYC, no less), this really helps lower one’s vibrational frequency, so to speak. In other words, it’s a great way to naturally wind-down and check in with your breathing and your body; it's almost like a light-guided meditation. I'm not sure if I will be able to commit to using this every night, but I was pleasantly surprised at how well this thing works. 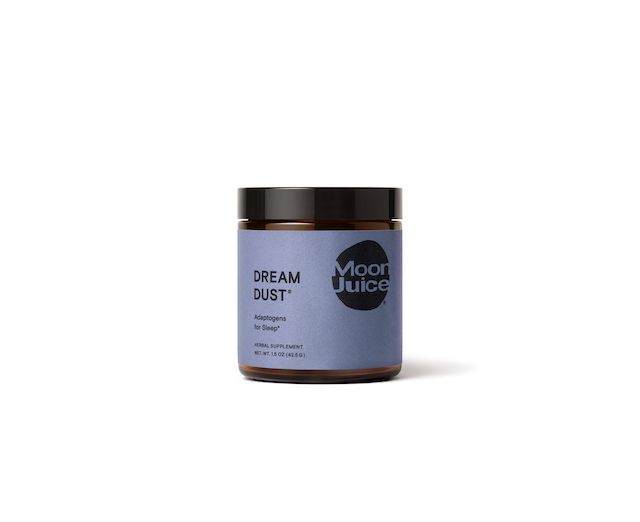 This brown-colored powder might not look appetizing, but trust me, it works. Out of all of the supplements I tried for this story, I felt the sleep-boosting powers of this one the most—probably because it’s loaded with adaptogens like ashwagandha and Schisandra, both known for their calming effects. I kid you not, about twenty minutes after drinking one glass of this powder mixed into some hot water, I felt an overwhelmingly calm feeling from head to toe. No exaggeration. Pro tip: Mix it in with some chamomile tea or a drop of honey—sipping it on its own is doable, but not the most enjoyable. 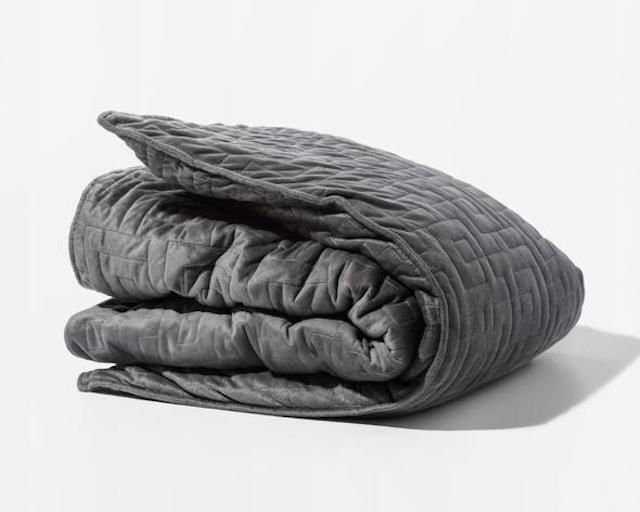 Would you believe me if I said I’ll never live without a gravity blanket ever again? The blanket itself feels like a much thinner version of those sandbags we tossed around in elementary school gym class, only in blanket form and much chicer, of course. As my fiancé aptly put it, “It feels comforting, like you’re being swaddled.” Agreed. I opted for the 20 pound version, which is heavier than I anticipated. Unlike I anticipated, I didn’t get too hot while lying underneath (probably because I was sent the “cooling” version of the Gravity Blanket, although the concept of a cooling blanket will always seem oxymoronic to me). Sleeping underneath the blanket also makes it surprisingly hard to toss and turn, which is good because I tend to fidget—although I’ll admit that some nights this does annoy me, and I end up kicking it all to the end of the bed by morning. But for a pre-bedtime, instantly calming effect (sans ingesting any supplements or having to do anything, really), it would be hard to top this. 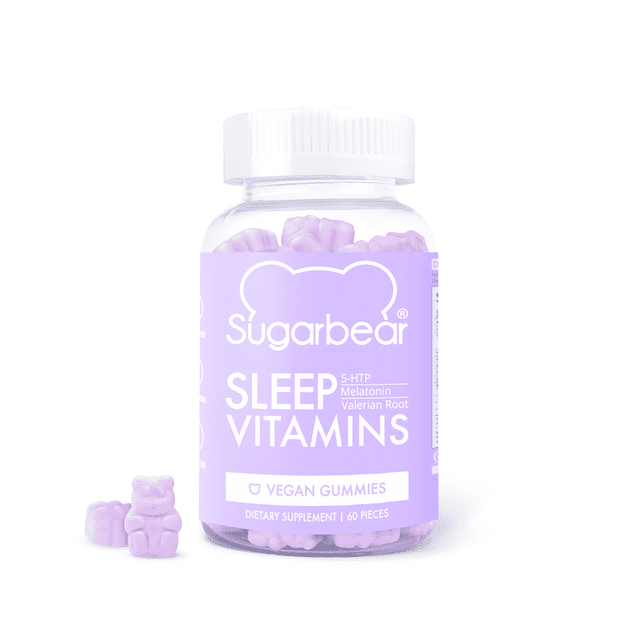 The real issue with these gummies is that they taste too good, so it’d be pretty easy to over-do it on the melatonin—but as tempting as it was, I stuck to the dosage. In addition to the melatonin (3mg in every gummy), these tiny purple bears are formulated with a who's-who list of natural sleep supplements: magnesium, L-theanine, vitamin B6, lemon balm, valerian root, and 5-HTP. Also, they don’t contain any artificial sweeteners or flavors either, which is always a good thing. About thirty minutes after taking two of these, I did feel noticeably drowsy—in a good way—and I comfortably drifted off to sleep. While these did work, I personally prefer a supplement to a gummy, and at $30 a bottle for a month’s supply, the price tag is a bit steep. But there’s no question here, these things definitely work well and are super yummy. (You can read Byrdie senior editor Lindsey's full Sugarbear Sleep Vitamin review here.) 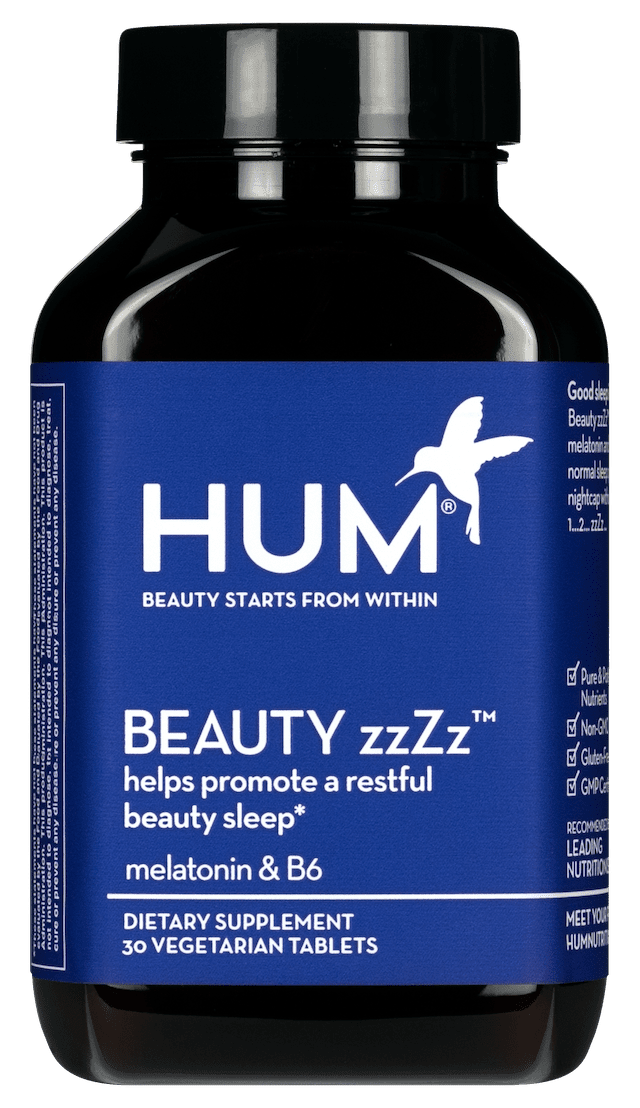 These tiny white pills worked exactly as advertised. Each one contains 3 mg of melatonin (plus some calcium and vitamin B6), which is on the lower end of the melatonin spectrum, but I prefer this dosage because the higher ones tend to lull me into terrifyingly lucid dreams. And, as much as I like the aforementioned adaptogen dust, these supplements have a much better chance of sticking around in my regular nighttime routine because 1). they are just so easy to take and 2.) they also work very fast. Some nights I’m just too lazy to brew myself up a cup of herbal-powder infused tea, and on those nights I’ll just pop one of these and be off to dreamland in no time. Plus, you can’t beat the price—just $10 for a month’s supply. 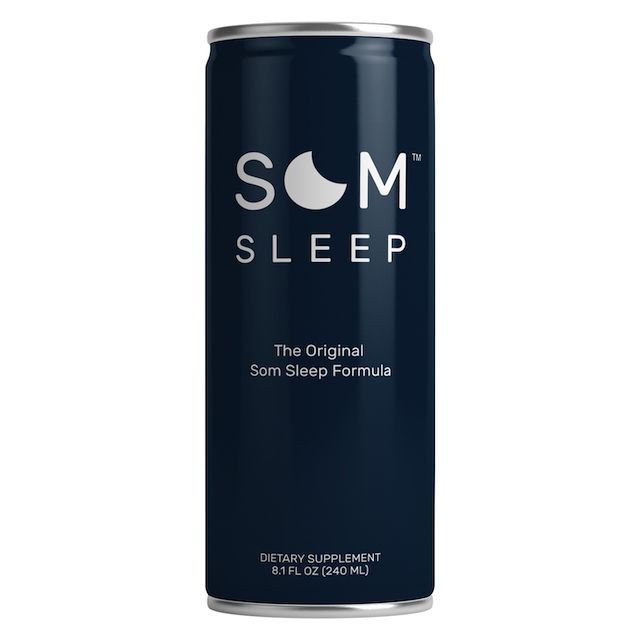 Something about drinking an 8 ounce can of sugar-containing liquid right before bed didn’t sit too well with me—because let’s be honest, there’s no way I make it a full eight hours without getting up to pee in the middle of the night. But nevertheless, I persisted (and for the record, SOM also makes a sugar-free version). As instructed, I sipped down one full can about thirty minutes before heading to bed. I wanted this stuff to work wonders—especially after reading insanely positive reviews like this one, but it just didn’t do much for me. Perhaps it takes repeated use overtime to really kick in? Perhaps I’ve just been more stressed than usual this past week? Both seem possible. The ingredients stand for themselves, no doubt: melatonin, L-theanine, and GABA, all of which are well-known natural sleep remedies. It tastes good, too, kind of fruity and pretty sweet. I’m only a quarter of the way through the 12-pack (which retails for $30), so I’ll keep sipping on it to see if I notice a difference.

Next up: 6 easy ways to recover from a bad night's sleep.