Last year, we introduced you to an indie beauty brand called Bitter Lace Beauty, which makes amazing, Halloween-themed highlighters (think candy corn–, spiderweb-, and blood splatter–themed compacts). They went viral on the internet, making people yearn for the collectible makeup products. That's kind of the company's thing since it also creates dreamy pressed powders inspired by some of the most famous stories and fairy tales. We specifically love the Little Mermaid– and Beauty and the Beast–reminiscent illuminators that come pressed with the shapes of coral, seashells, and roses.

But now we're back to the Halloween-themed goodies. Recently, a new highlighter hit our radar, and we're obsessed. It's not a pressed powder like the others before it. Instead, it's an undulating liquid crystal formula that swirls around in a skull-shaped bottle. 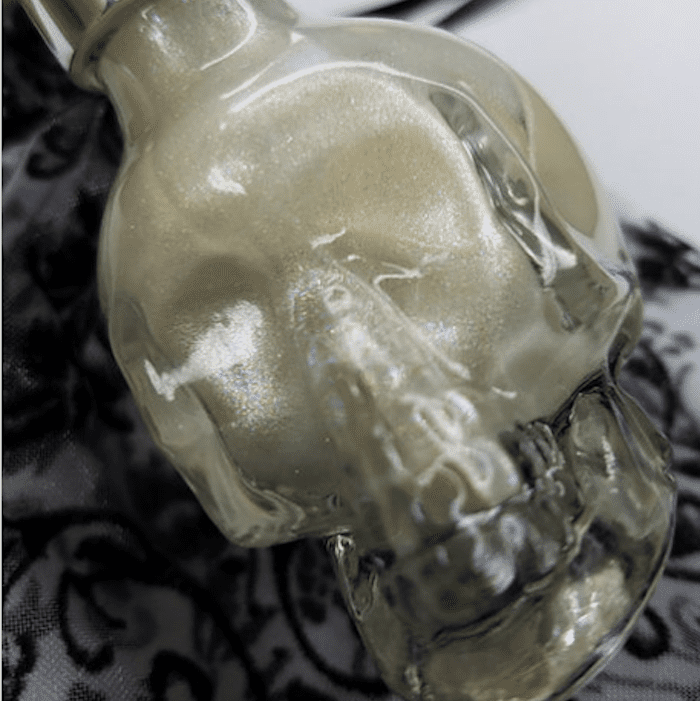 This vegan and cruelty-free highlighter is called I Put a Spell on You. Any '90s kids out there (or anyone who has watched any Halloween movie ever) will surely recognize that name as the title of the Jay Hawkins song that Bette Midler sings in Hocus Pocus. It's iconic.

It's infused with witch hazel and, according to the product description, dries down to a shimmer stain that doesn't budge. The formula acts like a liquid lipstick, and though it can be quite runny at first, quickly sets into a long-wearing film. If that fantastical purple and gold-flecked crystal finish don't sell you on it, then the fragrance will. It's scented with juicy plum and whipped caramel cream. Plus, it comes wrapped with bourbon vanilla and jasmine flowers. (How's that for the ultimate spooky-chic packaging?)

This highlighter was originally listed at selling for $30, though it's currently marked down to $5, so hurry up! It might be gone before Halloween.