Meet the Photographer Creating the South Asian Representation We Need

Get to know Simrah Farrukh. 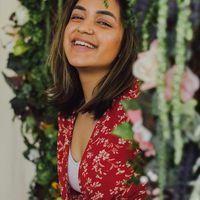 Welcome to Byrdie's new series, The Hustle. We're profiling diverse, interesting women and female-identifying folks in the beauty and wellness industries who are usually behind-the-scenes. From the cosmetic chemists formulating your holy-grail serum to CFOs driving the biggest beauty companies forward, these women are the definition of career goals, and they're getting real about the journeys that led them to where they are—the highs, the lows, and everything in between.

Today, get to know Simrah Farrukh, an American-Pakistani photographer whose work focuses on South Asian women and Muslims in fashion and media and extends to other women of color. Her photography explores the intersection of heritage, identity, and community. Her past clients include Netflix, ELLE Magazine, The New York Times, and more. As a South Asian woman, I've been following Farrukh's work, and I firmly believe that you can't be what you can't see. Her photography makes me feel more represented.

We sat down with Farrukh to learn more about her photography, why representation matters to her, and how she navigates self-doubt.

How did you get into photography as a career?

In high school, I was photographing my friends as a hobby. I always saw older girls, or bajjis, bring their cameras to take photos at weddings. My dad also had a film camera, so he always captured our lives through home videos and pictures. Years after my dad stopped using the film camera, I found it and shot a roll of film with it.

When I got to college, I was encouraged to expand my knowledge and views, so I decided to pursue photography and center my work around identity because I saw a lack of South Asian people in fashion, TV, and film. I saw people of different identities photographing people from their communities, so I wanted to do that myself. I recently put in my two weeks at my part-time job, so I’m officially a full-time photographer.

Congratulations! Who are some of the artists and photographers that inspire you?

A lot of my inspiration has come from other South Asian artists like Amrita Sher-Gil A Las and many Black photographers who have paved the way for other people of color. I also find inspiration from South Asian culture like Mughal portraiture and its colors and vibrancy.


One of your projects is the series “This is What a Muslim Looks Like.” What prompted you to start the series?

I am Muslim, so I knew I wanted to incorporate Islam into my work intentionally. I wanted to challenge the stereotype that many Muslim girls rebels against their religion to be accepted by the Western world.

I saw Riz Ahmed’s article about the negative representation of Muslims in Hollywood, and it made me think about how representation of Muslims focuses on South Asian and Arab Muslims. I wanted to change that and showcase Muslim representation across a range of ethnicities and heritages. Thorugh film photography, ‘This is What a Muslim Looks Like,’ aims to make the statement that anyone can be a Muslim, and there’s no singular way to look like one.

What are some of your other favorite projects?

Togetherness, one of my recent projects, was inspired by miniature portraiture and Sultana’s Dream by Bengali feminist writer Begum Rokeya. This essay described a utopia where women were free to roam around, and cis-men—along with their violence—were locked away. I wanted to make a modern version relevant to today’s society that challenged the male gaze. During the shoot, I wanted to create a safe space for women and non-binary people to feel free to be together and interact. I asked the models to do different poses that visually represented the project. I was proud of how the images came out.

How do you think that beauty fits into this series, and how can it subvert traditional Eurocentric beauty standards?

As South Asian women, we're often confined in a box of what we should be, and this project shows these models as they are. It was important that these models didn't feel the need to water themselves down. It challenges the beauty standards that are often set by men, like the expectation to shave our arms, tweeze our eyebrows, or thread our upper lip. I encourage models to show up as they are while still using the product or communicating the photoshoot concept.

Do you ever have feelings of imposter syndrome or self-doubt?

It always shocks me to see people using my photos on mood boards or for photography inspiration because I still have so much to learn about storytelling. For me, impostor syndrome is a product of not seeing South Asian female photographers, making me question if I deserve to be in certain rooms. Other times, I ask myself: Am I here because I deserve it, or because someone wants the client to be seen as ‘diverse and inclusive?

I might be one of the few South Asian female photographers in this space, but I’m also not alone. I know that there are other South Asian women of the same mindset. I’ve found a community of other South Asian creatives in L.A., including writers, actors, artists, and singers, who are all inspiring and comforting.

You’ve talked about the importance of creating meaningful representation that can challenge what already exists. Is there a call to action that you'd offer to companies or photographers that are working on beauty campaigns with BIPOC folks in mind?

Instead of assuming what BIPOC women want, please do your research. Talk to people of different ethnicities and races to understand their beauty needs or concerns and intentionally address them in a campaign. Otherwise, they may make assumptions about what a brown woman wants. It’s also essential to create a human interaction between the company and the client to get a personal understanding.

Do you have any advice for South Asian creatives and photographers that are inspired by your work, and may want to follow up in your footsteps?

It is challenging, and you may have a non-linear journey where you’re juggling clients and personal projects. However, keep creating the work that you’re excited about, and commit to finding ways to improve your craft and build connections. Being a great photographer starts with the risk of putting yourself out there—don't be afraid.

Thanks for taking the time to chat with us. Where can people learn more about my work?

You can check out www.simrahfarrukh.com to see past projects and follow along with my latest projects on Instagram.