It's Okay to Take Antidepressants, Because Sometimes Meditation Doesn't Cut It 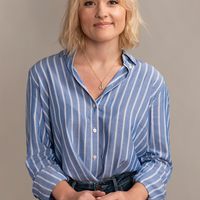 According to the National Alliance on Mental Illness, approximately 18.5% of adults in the United States experience mental illness every year. That's a significant portion of our population—one in five people—yet the stigma and misunderstanding that surround mental health remain. That's why in honor of Mental Health Awareness Month, we put the call out to our readers to share their own experiences with mental illness: their victories, their struggles, and what it's really like to negotiate a society that makes misguided assumptions about who you are based on an arbitrary definition of the word "normal." Our series My Life With highlights the raw, unfiltered stories of women who deal with anxiety, bipolar disorder, postpartum depression, and more, all in their own words. As always, check with your personal doctor before making any changes to your medication.

I’ve never been a morning person. I’ve tried, and despite the countless “successful women morning routine” articles I read, I can’t quite get there. There’s no morning pilates and lemon water, but rather the snooze button and most likely a latte with way too much sugar. I also can’t say I enjoy going out, and going to bed at night almost always riddled with long bouts of insomnia. These all seem like fairly typical traits for a career-oriented, introverted millennial female. So typical that it’s hard to see when the line starts blurring between common and something to take a deeper look at.

That line smeared for me awhile ago, in high school. While I can’t pinpoint the day, or even the exact year, the symptoms went from a quiet whisper to a blaring wail. Getting out of bed became impossible, and my mom’s pleading requests for me to get ready were met with fits of sobbing. I stopped enjoying everything and quit ballet, which I had done for years. Each thing began to pile up until it spiraled out of control. What started out as moody teenager issues turned into a life-threatening concern. I was suicidal; I began self-harming, and I formed a terrible relationship with my body—starving, bingeing, joining pro-ana groups, and restrictive dieting. I was thrown into a routine of testing a new antidepressant every couple of months, often finding little relief and a lot of painful side effects. During my antidepressant trial and error, I quickly found taking medication for a mental disorder was something to “be ashamed of.” While I felt support from my family, there was still an air disappointment. My friends didn’t quite understand, and my partner at the time began doubting the validity of my issues.

My mom is a registered nurse for a well-known healthcare company, and in her rare bouts of free time she works as a holistic nurse coach. Her having a hand in both worlds of treatment was helpful while I began learning how to handle my depression. She was fully supportive of me taking a traditional prescription, but also suggested a variety of supplements and treatments, like accupressure and healthy diets. It became a problem when she stopped being the only one offering suggestions.

As I got better at coping, it was easier to be more open with people about what I was going through. Unfortunately, these conversations became more like unwanted judgement sessions. People would say things like, “Could it be all in your head?” or “Have you tried doing yoga and working out? Positive affirmations?” Then, there were other, more prying examples. “Antidepressants aren’t healthy. Have you tried more natural methods?” and “How do you know it’s actually depression? Everyone gets sad at some point.”

Even out at bars friends would get angry or annoyed if I didn’t drink, despite me quietly mentioning I couldn’t because of my medication. My honest answers began to feel like excuses, and these unsolicited comments began eating away at me. Most of the time I wanted to scream at people. Asking them if they really thought I wouldn’t consider all kinds of solutions and cures; if they really thought that I enjoyed being miserable. I started questioning if I really was having issues at all or if I was just a weak, pessimistic person. I had to prove that I was above prescriptions. I fell into a dangerous, vicious cycle of quitting my antidepressants cold turkey, becoming horrifically depressed again, trying to eat healthy and workout more, then retreating back to the doctor’s office for a new prescription. The painful, knock-the-wind-out-of-you sadness that I was so familiar with always came back, no matter what I tried. Friends and family, and even I, failed to realize that everything I was feeling and experiencing wasn’t normal, and no, yoga alone wasn’t going to fix that.

It took me a long time to stop listening, things got worse. I finally realized depression had a better hold on my life than I did, which was something I couldn’t take anymore.

I started seeing a new therapist. I visited with a new doctor who discovered there were different groups of antidepressants no one gave me a shot at. I started a new medication, and for the first time something worked. I burst into tears during our follow-up phone call, telling her that I wanted to get out of bed each morning, and I didn’t feel like dying. I couldn’t remember the last time I felt that way. It was refreshing re-learning what it felt like to not feel sad every minute of the day. My antidepressants and a combination of healthy eating and exercise began to make life worth living again.

I know I’m not the only one with depression who experiences this. A few of my closest friends, several family members, and even some strangers have confided in me that they, too, were taking some kind of medication for depression or anxiety. Most agreed that it’s usually easier to keep it to yourself; sharing really only leads to unhelpful reprimanding. According to the Journal of the American Medicine Association, one in six American adults are taking a psychiatric prescription, and 84 percent of those people have been doing so long term. We’re not alone—it’s just that the stigma surrounding medication has convinced us that we need to be quiet about it.

Countless doctors appointments, several therapists, and over ten prescriptions later, I’m still here. And most of that reason is thanks to antidepressants. I’m happy for the people who don’t need to take a pill every day to keep their head above water. But some of us need more than a gentle meditation and morning run. While you should always do what you think is best for you, sometimes hearing that it’s okay from someone else can make an immense difference. I wish my younger self had that person to tell me that taking antidepressants is okay, and that it’s something I shouldn’t be ashamed of. I wish I would’ve known from the beginning that it’s okay to have antidepressants as a long-term plan.

I’m still learning. But one thing I try to remember is how important it is to do what you need to make life good rather than just bearable. Taking a pill doesn’t diminish your strength.

Next up: Another writer explains her experience with postpartum depression.