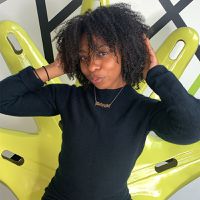 Tameka Abraham is a contributing writer for Byrdie. She has worked in the beauty and fashion industry for over five years as a publicist and journalist.

"Pull up or shut up" is the newly coined phrase that, as of recently, has the beauty industry spinning. Collectively, the industry has given more meaning and purpose to these five words than to the diversity and inclusion of Black women for the last century, and beyond. Yeah, I went there. The Black dollar continues to dominate the industry—having attributed to 85.65% in sales out of the total spend of $63.5M on "ethnic hair and beauty products" in 2017, according to Nielsen’s report—and yet there is an unwavering lack of representation of Black women and men in the beauty industry. The Pull Up For Change campaign has put a halt on fake support and performative brand strategies, and has finally put beauty brands on the spot to reveal their true colors.

Some brands conveniently struggle to understand how a movement geared towards lawfully convicting police (who have brutally murdered unarmed Black citizens), and using their power to terrorize an already systematically oppressed race of people, intersects with the beauty industry. Other brands have been left scrambling to explain why they profit and imitate Black culture while refusing to acknowledge the human rights of their Black consumers and staff members. See, oppression trickles down into everything—including beauty. In Nielsen’s 2018 report, Cheryl Grace, the senior vice president of U.S strategic community alliances and consumer engagement, explains “research shows Black consumer choices have a ‘cool factor’ that has created a halo effect, and has the influence to persuade not only consumers of color but the mainstream as well." Black women and men are the most alienated, underrepresented groups in the industry. That said, we are also those who continuously shift culture and push boundaries set by industry standards. So I ask, why is Black culture appealing, but supporting the livelihood of Black consumers the cause of so much discomfort?

“I think what we are fighting for here is a human rights issue,” explains Sharon Chuter, CEO and creative director of UOMA Beauty and leader of Pull Up For Change. Amidst the scores of protests that broke out earlier this month as a result of the unjust killings of George Floyd, Breonna Taylor and a list of other unarmed Black women and men, Chuter created a grassroots campaign designed to bring awareness to the underrepresentation of Black people in corporate America, especially in leadership roles. As a response to the Black Lives Matter movement and anti-racism revolution erupting worldwide, brands flocked to social media to post rehearsed and very well-crafted PR statements in addition to monetized donations in support of the movement. However the authenticity of support was immediately questioned, as some of these brands notably offer very little inclusion in-house. Chuter’s #PullUpOrShutUp campaign challenged consumers to hold off on spending for 72 hours to allow brands to publicly disclose the number of Black employees in their company, as well as specifically in leadership positions. Among the brands that "pulled up" were Estée Lauder Companies, Sephora, Ulta, Revlon, DevaCurl, Ouai, and many more.

Keep scrolling to learn more about the Pull Up For Change organization, as well as Chuter’s predictions on the future of the beauty industry.

#PullUpOrShutUp was a call-to-action that extended from your frustration with brands posting on social media about the Black Lives Matter movement, but failing to recognize that lack of diversity internally contributes to the oppression of Black men and women. Why do you think brands known for a lack of diversity chose to participate in your challenge?

The consumers and their loyal purchasers were asking for it. Many of the companies who have pulled up with low numbers, have given comprehensive and impressive action plans for how they plan to move forward. I love seeing that—a plan is a good place to start.

What do you want brands to understand about your challenge?

This campaign isn’t about naming or shaming. This is a consumer-driven campaign to create real change and get Black people in leadership roles. [This includes steps like] implementing cultural training, sensitivity training, and addressing company cultures immediately to make sure those companies are fostering environments where Black people can thrive. Talk is cheap, we need action!

What do you think this campaign can potentially mean for the future of the beauty industry?

I think this is a new beginning, I think it is going to be really good for the beauty industry. Everybody is going to benefit from diversity. Diversity is good for business. Look at the number of launches that come out, and they get dragged all the time because the products look ashy and white. The industry doesn’t look at it that way. It’s not just the products, it’s the people.

How can brands continue to hold themselves accountable?

This is the time for solutions. Real solutions. We need progress. We need some really hardcore training and more Black education, typically about the Black people that live in America. There’s a lot of [misinformation] in that area. Let’s face it, a lot of executives in this business are just as ignorant. They’re clueless. We need an organization-wide effort to actually educate ourselves—because when you know better, you can do better. You can’t do better until you know better. We have to make sure we take this time to know better. It’s not about bringing Black people to the workplace, it’s about [fostering a work environment where] Black people can thrive. Right now, Black people cannot thrive. It’s almost like, right now, the responsibility of Black business is to hire Black people. But here’s the problem: Black people are not applying to Black businesses. There needs to be a very conscious effort, and I know it’s going to be weird at first. We all must make a conscious effort.

Influencers like Jackie Aina have spoken out about how they've been affected by the lack of inclusion, unequal pay, or white-washed marketing. How do you think Black and non-Black influencers can use their platforms to continue to bring about change?

I think every Black influencer has a role to play in this—not just in beauty, not just celebrities—everybody. Because here’s what happens with Black influence: We’re doing this and still giving back to white brands that don’t fuck with us. Unless all your people are straight, you are not straight. So, I think celebrities and influencers have a huge part to play in this. If we’re holding people accountable, we’ll need them. Some companies need Beyoncé more than she needs them right now. [The same goes for] Nicki Minaj and Rihanna. They have that influence. If every Black celebrity said, "If you don't have 10 to 12 Black people at the corporation, I am not going to work with you,” in six months, all companies would have that. Because they need the Black cool factor. They need the Black influence.

Outside of the lack of diversity and inclusion internally, a huge issue in the beauty industry is a lack of products that benefit our skin types and tones. As the CEO and creative director of UOMA Beauty, how does diversity go beyond shade availability?

I’ve always said the solution to better products is more diverse products. That's more diverse teams. You need enough voices in a room. But that’s not the only solution. Overall, [brands] don’t even make samples of their formulas in dark shades. Now, it looks like they're using inclusion as a last-minute addition to marketing, and that’s not cool. So, I think it starts with diversity, and not just color—it’s about an open and shared culture. I hate it when people say "I don’t see color." You do see color. I am a Black woman, I have nothing to be ashamed of. I want you to call me a Black woman because I'm a damn Black woman! At UOMA, our mission was to create an outspokenly inclusive culture. There’s a reason people are outspoken before companies are inclusive. You cannot have an inclusive culture before an outspoken culture. The culture has to be honest—it has to be raw. Then, you can get over all your sentiments and feelings towards race. UOMA Beauty has always made a conscious effort. We are cultural educators at UOMA Beauty.

Where does the Pull Up For Change Organization go from here?

#PullUpOrShutUp was just a campaign. Pull Up For Change is a position-focused company. What we’re doing is focusing on connecting and creating jobs between the Black community and corporations who are pulling up and saying, "Hey, I want to hire people." Great, let’s help you and see if we can make that happen. We offer solutions in terms of helping Black communities on basic stuff like mentoring. Within my network, I know all these amazing, powerful Black women and men. I give people access to people they didn’t even know existed. We watched the campaign out, and now we’ve been working on the organization. We want to keep that fire in the consumer. We’re trying to find a way to create something to help people, so when they’re shopping they see what brands pulled up and which ones didn't. Like I said, we want to keep that fire in the consumer burning, but on the other hand, we need to supervise the solution to fix the problem. That way, we can all be part of a better world. That’s where Pull Up For Change exists. We exist and facilitate those two things. We facilitate the consumer conversation and we facilitate the development and the opportunity of Black powers, and connect them with resources, and make sure they’re prepared for it.

An Open Letter To The Beauty Industry