This Celeb-Favorite Facial Changed My Face, and I Learned So Much In The Process

Shani Darden is one of the most influential players in the skincare game. Her name bears notable significance, especially in Los Angeles, which is where she has a studio (in Beverly Hills no less) to cater to her many clients (including Jessica Alba, Rosie Huntington-Whiteley, Shay Mitchell, and more).

Her reputation is well-deserved. Not only is her expertise as an esthetician highly sought after by everyone from the aforementioned celebrities to beauty editors and beyond, but she's also produced a line of effective skincare products (her Retinol Reform is perhaps the most well-known of these products. Be sure to read our full review, here).

Knowing all of this, you can see why I was both ecstatic and a little anxious to get a facial from the skincare queen herself. After all, I've seen some of Darden's celebrity clients IRL, and my congested, redness-prone complexion is a far cry from their seemingly flawless ones. However, my excitement far outweighed any minor skin anxieties I might have had, so I entered her new studio ready to soak up as much skincare knowledge as I could. Keep scrolling to see what happened.

Before I even get to the actual facial, I have to say that I was struck by the beauty of her studio. The earth-toned walls and curtains contain a massive rose pink couch, marble side tables, flickering candles, and the relaxing sound of a tinkling water feature. It's comforting and chic and far from the bright and medical atmosphere of other esthetician's offices and med spas.

I was similarly impressed with the room where the actual facial was to take place. It was spacious and had the same earthy tones as the main room, the only difference was that there was a big spa bed in the middle of the room in lieu of a giant pink couch, and lots of tech-y skin devices surrounding it.

The facial started with Shani analyzing my skin. She told me that she could see I had mild rosacea (which I do, and it's the bane of my existence), and that my skin was on the oily side (again, she was spot-on). So she began by cleansing my skin with her Cleansing Serum, which promises to cleanse the skin without stripping it of its natural oils.

After cleansing, she moved on to applying a custom mask, undergoing the process of extractions, and treating my skin to an oxygen mask and a LED light mask. The latter was a combination of blue and red light, which simultaneously kills acne-causing bacteria and boosts collagen levels. After that, it was time to undergo the microcurrent treatment. This was my favorite part of the entire facial, since I could see a visible difference in the contours of my face before and after.

Here's the before picture. While I didn't have any pressing skin concerns, I was rather unenthused with how congested it was (there were small bumps on my forehead and around my mouth). I also disliked how dull my skin looked, despite my best efforts to boost radiance by way of exfoliating peel pads. And if I'm being completely honest, I've always been self-conscious about my jawline (or lack thereof). Because of that, I'm always looking for noninvasive ways to tighten and lift that area.

Lucky for me, tightening and lifting is the point of a microcurrent treatment. Shani uses microcurrent gloves, which are abrasive gray gloves that run low-level electrical pulses into the skin in order to try to trigger the facial muscles to tighten. It's essentially like a workout for your facial muscles. Not only does it tighten and lift them, but it is also purported to encourage lymphatic drainage to drain excess fluid and de-puff the complexion.

Before she touched the gloves to my skin, she asked if I've ever had a microcurrent treatment before. When I answered no, she responded "it's a trippy feeling," and it was. It almost feels like your facial muscles are clenching on their own. While there's absolutely no pain, it took me a second to get used to the vibrations that seemed to resonate through my head.

It was all worth it when I saw the results.

Look closely, and you can see that my jawline looks slimmer, and my cheekbones look much more contoured. For once, they look fully convex, which is exactly how I want them to look. Not only does my face look slimmer and lifted, but it's also incredibly radiant compared to the state that it was when I walked into the room. Everything just looked sharper, and I liked that.

Clearly, I was impressed with the results, and I wanted to know how I could maintain them at-home. Shani recommended I try using a NuFace Device, which is an at-home and FDA-approved microcurrent device that the brand claims only takes about five minutes a day to make a difference in the appearance of the skin—more specifically, to improve facial contour, facial tone and reduce wrinkles by stimulating the production of collagen and elastin in the deep layers of the skin. I've been using it for three days, and I can already see a slight, yet significant, difference in the contours of cheekbones and jawline (bless), as well as in the height of my brows. I think of it as an incredibly subtle facelift. 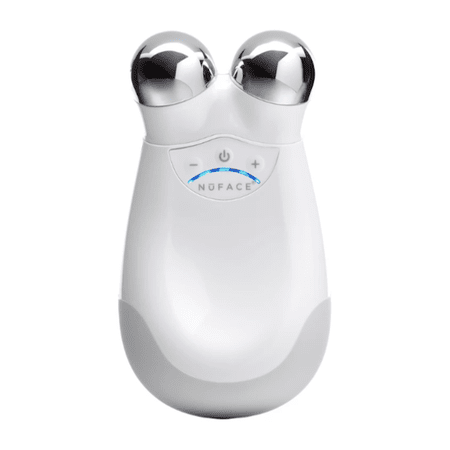 Unlike Shani's microcurrent gloves, I can feel absolutely no sensation from the NuFace device. I apply the conductive gel primer, run the device over certain areas of my face according to the directions, rub in the remaining gel primer, and go to bed. It's simple, it's easy, and I swear I can see real results in the mere three days that I've been using it. They're not as striking as the results I saw from Shani's microcurrent gloves, but they're results all the same.

But let's get back to that life-changing facial, shall we? After it was complete, Shani sent me on my way with moisturized, sunscreen-protected skin. Overall, my skin was smooth, bright, and clear with only a little bit of redness showing through in the middle of my face, but that's nothing new for me. Anyway, most of it was due to the extractions of blackheads on and around my nose. I took this picture for photographic proof as I was waiting for my Uber outside Shani's studio.

I was sent home with Shani's Daily Cleansing Serum and Texture Reform, both of which I've been using religiously ever since. The former is a lathering cleanser with glycerin, jojoba, sodium hyaluronate, oat bran extract, and olive and chicory leaf extracts; it promises to cleanse while it hydrates, soothes, and fights inflammation. The latter is the gentler version of the iconic Retinol Reform. It targets uneven skin tone and texture, blemishes, and other skin concerns, but does so in a gentler, non-irritating way.

These days I'm taking care of my skin as per Shani's recommendations, as well as looking into some other products she uses and loves, including Supergoop sunscreen and iS Clinical products (namely the Hydra-Cool Serum which is great for redness-prone skin like mine).

Check out Shani Darden's Instagram for skincare information, product recommendations, and advice. Then, check out her nighttime skincare routine.