Exclusive: Getting Ready for the SAG Awards With Saoirse Ronan 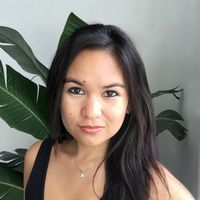 One might think that the getting-ready process is pure chaos in the hours leading up to an award show, especially one as big as the Screen Actors Guild Awards. But that wasn't the case for actress Saoirse Ronan and her dream beauty team, which included celebrity hairstylist Adir Abergel and celebrity makeup artist Kara Yoshimoto Bua.

"We had a great time listening to a little Rihanna in the background," said Abergel. "She just gets you in the right mood." Having worked together for so many years on so many A-list clientele, Abergel and Bua are each other's work spouse. They trust each other and vibe so well together that the final beauty look always comes together with such ease and cohesion. Plus, their clients really appreciate the family atmosphere they've created. "Saoirse gets a kick out of the way we bicker," joked Bua.

I had them break down Ronan's beauty look for me and they gave Byrdie the exclusive details, from the inspiration to little hacks that beauty lovers can use in their everyday life. Scroll down to see what they had to say.

Abergel wanted a hairstyle that played off the dress really well. "It had this incredible silver detail in the front," he said. "[Saoirse] had sent me an image of it, and I immediately started thinking about '60s imagery. I was starting to look at all of these old '60s Vogue covers, and thought of people like Sharon Tate and Brigitte Bardot as references."

He wanted youthful but chic and elevated, which is why he went with a low ponytail. "I wanted it to feel '60s-inspired in the silhouette, meaning there was height to it in the crown and a little deconstruction to the front of the hair texture-wise," he said. As for the elevated part, he threaded a silver thread throughout the ponytail. "I've had it in my kit," he said. "I had gotten it back in the day at this vintage store in Paris."

"For me, it's all about the integrity of the hair. I used the Virtue Uplifted Volumizing Whip ($36) to give it the volume and lift I needed. Then I used the Virtue One for All 6-in-1 Styler ($36)." He created a middle part, rough-dried the crown for volume, and blow-dried the front with a round brush. To give the hair "some deconstruction," he used a curling iron to give the front section a slight curl as well. He sprayed the Virtue Finale Shaping Spray ($18) before needling the silver thread throughout the low ponytail. "It brings modernity to something that is classic in the shape," he said.

As for makeup, Bua went with the less-is-more approach. "I wanted to keep her modern, young, and feeling fresh to balance the glamour of the dress," she said.

For the face, she started with skincare. Ronan pumped two to three pumps of the True Botanicals Pre-Cleanse Oil ($48) in her hands and used gentle circular motions up and out to smooth the cleansing oil over her face and neck for 20 seconds before rinsing with warm water. Then Bua mixed the True Botanicals Renew Nutrient Mist ($48) with the Chanel La Solution 10 de Chanel Sensitive Skin Cream ($80) and applied the combo all over Ronan's face. Bua finished with Chanel Sublimage La Crème Yeux UltimateRegeneration Eye Cream ($225) under Ronan's eyes. "I love it when the skin feels quenched before makeup application," Bua said.

Because Ronan's eyes are already so defined and piercing, Bua decided against a mascara and instead just curled Ronan's top lashes. Bua used a little bit of the Chanel Le Gel Sourcils Longwear Eyebrow Gel in Transparent ($32) to separate the lower lashes.

"I worked with some shimmer in the corner of her eye to pick up the glitter in the dress," she said. "To highlight the inner corners of her eyes, I used Chanel Illusion d'Ombre Long-Wear Luminous Eyeshadow in Mirage ($36)." Across the entire lid, she swiped Chanel Les 4 Ombres Multi-Effect Quadra Eyeshadow in Tissé Dimensions ($61), then applied the beige tone from the same palette in the crease.

For the lips, she didn't want to go all the way with a '60s vibe and opted for a more classic red. She used the new Chanel Poudre â Lèvres Lip Balm and Powder Duo in Rosso Parthenope ($37). "It's a limited-edition lip and powder duo. It has an amazing balm in it. You can use as much (or as little) as you want, so you can go from matte to glossy. I went somewhere in the middle," she said. "The pigment is powder, so I gave her a tint to give her a softer look."

She finished with the Chanel Joues Contraste Powder Blush in Rose Ecrin ($45) on the edges of her lips to set and to soften the color. "You can use blush to soften and set the edge. It makes the edge matte," she said.

"When you're doing a lip, it's about layering and setting. I moisten and line the whole lip to set it as a base," she says. "The Chanel Le Crayon Lèvres Precision Lip Definer in Pretty Pink ($31) is lighter than the lip powder I used."

Before sending Ronan off to walk the red carpet, Bua gave her two tips for when she needs to touch up her makeup throughout the night. "I sent her there with Chanel blotting papers with the mirror in it. I tell her, 'before you get out of the car, you take a blotting paper and press it on your forehead, chin, and on the sides of your nose and you're good to go,'" Bua said.

As for making sure the lips stay vibrant throughout the night, she told Ronan to focus on the middle part. "When touching up the lip, just powder the middle part; that's all you need," Bua said.