Medically reviewed by Sunitha Posina, MD
Sunitha Posina, MD is a board-certified physician in internal medicine based in New York. After completing her medical training in India, she completed her post-graduate training in Internal Medicine at Stony Brook University Hospital in New York.
ABOUT BYRDIE'S BEAUTY & WELLNESS BOARD
Board-certified physician in Internal Medicine
Fact checked by
Shereen Jegtvig 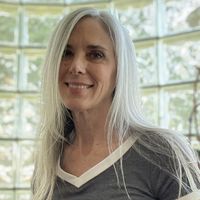 Shereen Jegtvig is an author, fact-checker, and expert on health and wellness in the lifestyle space.

Salt therapy is getting a lot of attention lately—and potentially for good reason. Spending time in a salt cave is said to have skin and respiratory benefits, and it may help with stress and anxiety, too.

Hearing of a therapy that could benefit both body and mind is sometimes all it takes to pique our interest, so of course we're feeling compelled to dig a bit deeper into salt therapy. Especially since we could all use a bit of help in the stress department these days. Skeptical yet still interested, we are desperate to know: does salt therapy actually have healing benefits? And if, so how does this all work? Here’s what we learned after reaching out to some experts.

What Is Salt Therapy?

More formally known as halotherapy, salt therapy is a treatment that’s said to benefit the body in all sorts of ways through inhaling salty air. Typically, you can accomplish this by sitting in a salt cave or spa where salty air is dispersed through a machine called a halogenerator.

The halogenerator “breaks down pharmaceutical grade sodium chloride into microscopic particles,” explains Sarita Khan, director of salt at the Vermont Salt Cave Spa. The results are unproven, mind you, but in theory here's how it's supposed to work: “When inhaled, these minuscule salt particles are practically invisible, being only one or two microns in size, and so act as a [bronchodilator] making breathing easier and improving lung function.”

The therapeutic use of salt cave therapy began at the Wieliczka Salt Mine in Poland in 1843, Khan says. Now a Polish historic monument, the site reaches more than 300 meters underground. Jennifer Baker-Johnson, owner of The Salt and Sauna Sanctuary in Orange County, CA, says salt miners in Eastern Europe seemed to thrive in good health after breathing in micro-sized salt particles while in the salt mines, and dry salt therapy took off from there.

But other forms of salt therapy have existed in several cultures even before the development of modern medicine. “Records from ancient Egypt are believed to mention salt's medicinal benefits,” says Esther Cha, marketing manager at SoJo Spa Club. “Hippocrates in ancient Greece also utilized salt in many of his health remedies.”

These days, salt caves have become a popular spa-like experience. Sojo Spa Club, for example, offers a dry salt therapy that’s “modeled after a popular European spa treatment that mimics the environment of these natural salt caverns,” Cha says. “The aerosolized salt (an ultra-fine powder dispersed into the air) is a natural decongestant with cleansing properties that is believed to assist with respiratory ailments, including colds.”

At Montauk Salt Cave, you can relax in a zero-gravity chair while listening to calming music for a 45-minute salt therapy session amid nearly 13 tons of Himalayan salt. On their website, Montauk Salt Cave says halotherapy can be a treatment for inflammation, allergies, anxiety, asthma, and other conditions (but if you're seeking salt therapy to treat a health condition, you definitely need to consult your physician first).

Of course as trends and treatments are constantly evolving, other forms of salt therapy are continuously popping up, including Himalayan salt lamps you can buy and plug in at home, air salinizers, and salt inhalers.

The Benefits of Salt Therapy

The science of salt therapy is definitely limited at this point. In fact, many medical experts are quick to highlight that there are no evidence-based findings to support most benefits associated with salt therapy. But this doesn't necessarily mean they don't recommend salt therapy or that they find it unsafe.

“The exact mechanism is unknown, and most studies are anecdotal and based on patient perception of symptoms,” explains Tania Elliott, an allergist/immunologist and Chief Medical Officer of Virtual Care at Ascension. "That said, we know it helps with many forms of respiratory inflammation, and therefore will enable individuals to take fuller, deeper breaths.”

Elliott says deep breathing helps with anxiety through stimulating the vagus nerve, which is known for activating the parasympathetic nervous system that helps us relax. Deep breathing also increases alpha wave brain activity, which is associated with calmness and alertness. So there's hope salt therapy can help us feel a bit less anxious.

She adds that the environment of a salt cave—typically phone free—helps people detach from the outside world and may reduce stress and anxiety. “There aren’t any large scale safety studies done on the use of salt therapy, but generally speaking there is little harm in it,” Elliott says. “The most important thing for people to understand is that salt therapy can act to complement an existing treatment regimen, not replace it.”

Like many others, Baker-Johnson says halotherapy can help remove toxicity from the respiratory system, improve skin function and appearance, and boost the immune system. But there is a caveat: to receive the benefits of dry salt therapy, a halogenerator is key, she says.

"The sole purpose of a halogenerator is to mimic what a natural salt mine or cave would be by breathing in tiny micro-sized salt (pharmaceutical-grade sodium chloride) particles that are tiny enough to reach deep inside the lungs," she explains.

Is it Safe to Try Salt Therapy at Home?

Vandana A. Patel, an internal and pulmonary medicine physician and clinical advisor at Cabinet, points out that there aren't evidence-based benefits for Himalayan salt lamps, air salinizers, or other home salt therapy methods, but says it's still safe to use halotherapy at home in most instances. "The therapy is helpful in reducing inflammation and clearing mucus, thereby opening your airway passages," Patel says.

But considering Baker-Johnson's point that a halogenerator needs to be present in order for halotherapy to mimic a natural salt mine or cave, a Himalayan salt lamp at home may not actually provide many benefits aside from relaxation.

"Himalayan salt lamps and salt on the floors and walls do not give off any negative ions," she says. "They are purely for decoration only and to "feel" relaxed. In order for Himalayan salt to release any negative ions, it will need to be heated to 1,500 degrees Fahrenheit (816 celsius), which can not be accomplished with a 15 watt light bulb."

As with any new form of therapy or treatment, it's crucial to check with your doctor first, especially if you are dealing with other health conditions.

How to Practice Salt Therapy at Home

If you're thinking of trying salt therapy at home, here are three different methods you may want to consider:

Himalayan salt lamps can be purchased starting at around $20, making them a relatively affordable option. Though as Baker-Johnson mentioned, Himalayan salt lamps only produce beneficial negative ions when heated to 1,500 degrees Fahrenheit, which you can't achieve in your home. That said, this could still be a good option if you're in search of something aesthetically pleasing that's relaxing to look at.

Treat Yourself to an Air Salinizer

An air salinizer releases tiny salt particles in the air in an attempt to mimic the environment of a salt cave. Baker-Johnson says this is "most-likely not as effective as a Halogenerator. It is used for a more simple home treatment." She recommends sure the air salinizer uses sodium chloride (preferably pharmaceutical grade).

Installing an at-home salt therapy booth that uses a halogenerator is the only way to get the benefits offered by a commercial salt cave, our experts tell us. A room full of Himalayan salt bricks or panels won't necessarily do the trick.

"The booths need to be air-tight and have the necessary ventilation, humidity level controls and purification systems to ensure effectiveness and safety," Khan says. "Being coated with salt on your skin or clothing is not a sign that the home salt therapy booth is necessarily offering respiratory treatments. That merely shows that the size of the salt particles are too large to get deep into the lungs and bronchial passages. The salt on the skin though is terrific for skin health."

Quarantined With Laura Dern: 6 Ways She Changed the Way I Feel About Wellness
Article Sources
Byrdie takes every opportunity to use high-quality sources, including peer-reviewed studies, to support the facts within our articles. Read our editorial guidelines to learn more about how we keep our content accurate, reliable and trustworthy.
Featured Video