Ryan Destiny Says This One Ingredient Transformed Her Skin 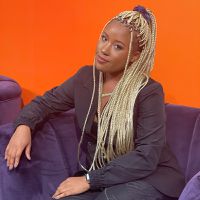 D'Shonda Brown
D'Shonda Brown is passionate about public speaking, storytelling, and inspiring testimonials. She has written for publications including Coveteur, Essence, and more.
Byrdie's Editorial Guidelines

After two years, Ryan Destiny has made her fearless return to music. Her latest single, "How Many," gives fans a taste of '90s nostalgia, showcasing her signature sultry R&B vocals. Of course, the track also arrived with mesmerizing visuals. In the video, Destiny dances around alone in a lit-up box of mirrors while belting lyrics about a toxic partner. "It's honestly been such a journey with this video, an unexpected one," she shares (more on that ahead).

In addition to working on new music, Destiny has been busy stacking her resume with other purposeful projects. To name a few: She became makeup brand Black Opal's first celebrity ambassador in 2021, held a recurring role on season three of Freeform's Grown-ish as Spelman College transfer student Jillian, and collaborated with retailer PacSun on several self-titled clothing collections. Not to mention, she just wrapped production on the film Flint Strong, in which she plays world-champion boxer Claressa "T-Rex" Shields. The best part? There's much more in store for the actress, singer, and fashion tastemaker.

Below, Destiny opens up about the vision for the "How Many" music video, balancing her acting and singing career, and how she keeps her hair and skin so healthy.

The One Thing She Wanted to Accomplish With the Music Video

"I thought of the whole concept. I sent the director different references of being in a box, in the middle of nowhere, and we went through many options of where that could be. We ended up landing on this warehouse and floating box. When you hear a slow R&B song, you think [of] somebody lounging on the couch or the bed. I wanted the video to be what you wouldn't normally see—something intimate and unexpected. I also loved the choreography. I've always wanted to do a video where there's choreo from start to finish, and Sean Bankhead choreographed it. He did his thing. I don't trust many other people to do something like that."

The One Thing She Loved About Her "How Many" Makeup Look

"The eye look was all my makeup artist Ernesto [Casillas]. He's a magician, and I trust him with my life. The video is blue, and blue is my favorite color, so we thought a pop of color on the eye was a no-brainer. I'm usually scared of colors and wear brown or nude tones, so I was excited we got to do this because it was nothing like I'd done before. My outfit was also a custom piece that my stylist, Scot [Louie], and I drew. We went to LA Rocks for them to finish it for us. It was an awesome leather look."

The One Thing She Learned About Her Skin This Year

"My skin is my number one priority at this point. I recently got eczema, and I've had to change my regimen. With that being said, my routine is clean, fragrance-free, and sensitive skin-friendly. It's crucial with makeup, especially because I'm always putting it on. Skincare is the best thing to do when you're about to get your makeup done because the base is everything."

The One Skincare Routine She Swears By

"In the daytime, I stick with a very gentle cleanser. I switch off between one from Cetaphil and La Roche-Posay. I also love the brand's Toleriane Double Repair Face Moisturizer. I also wear sunscreen during the day. At night, I'll use a more intense face wash with more acids to clean out my pores. Sometimes, I'll use a vitamin C serum or a pad exfoliant. Then, I'll finish with my moisturizer."

The One Ingredient That Has Changed Her Skin

"I go through so many things with my skin—sometimes it's great, sometimes it's not. But, every time my skin needs saving, retinol is my lifesaver. I used to use retinol every night, but I've taken it down to two or three times a week. It has changed my skin for the better."

The One Thing All Black Women Need in Their Skincare Routine

"Sunscreen is crucial. Sometimes it's hard to find sunscreens that don't irritate my skin or add to the oiliness of it, but they're out there, and it's just crucial to use them every day. I promise it changes the texture of the skin for the better."

The One Brand She Loves to Use on Wash Day

"I switch between a lot of different products. One brand I love is Melanin Haircare. They have a great shampoo and conditioner. Oils help me out a lot, too. I've seen a significant change in my hair when I started oiling it more, especially on wash days. I also love deep conditioning. It's my favorite thing to do because my hair feels revived. Trims are also crucial; everyone knows it."

The One Thing She's Learned About Herself in 2022

"This year, I've had to become more self-aware. It's helped me tap into my emotions more. Sometimes it's easy to want to run away from feeling uncomfortable and sad, but it's better to face those emotions head-on. Hopefully, by doing that, those feelings pass through you instead of feeling like you have to fight every second of your life. I also say tapping into my inner child has helped me whenever I feel down in the industry. It helps me understand who I was and why I started."

"I feel forced [to choose], sometimes. If I get a job where I have to throw myself into a film or show completely, I have to hyper-focus on that. I did that this year with the film I did in Canada. I felt like I was stuck in Canada— not in a bad way— for three or four months, hyper-focusing on this project that meant a lot to me. I was still doing things outside of that whenever I could. It was just about finding the time but also knowing my limits. I want to be able to show up for things fully. I have to make sure I take the time to understand what should be prioritized. This next year will test that because things are starting to pick back up. I think I'm ready for it, and I feel ready for it. It's definitely going to be a lot, though, so ask me that question again in a year."

The One '90s Trend She Wants to Make a Comeback

"At this point, I don't know. I feel like everything's come back, in a way. I love the oversized baggy leather look that used to happen in the '90s a lot. I had ideas of bringing that look into my world because I love leather."

The One Pair of Sneakers She Loves Most

"I'm stuck between two different pairs. Right now, I go between the Aime Leon Dore New Balances and [a pair Yoon Ahn designed with Nike]. She has some new Air Force Ones coming out that I want to get my hands on because they're fire."