Rochelle Humes on Her Decision to Go Back to Curly Hair

Rochelle Humes is ever-evolving. She started her career as we know it as one-fifth of pop group The Saturdays before jumping into the world of radio hosting and TV presenting. Just as her career has changed, so has Rochelle's hair. Growing up, she had curly hair but found herself "copying" her straight-haired friends when she was younger and poker straight lengths were all the rage.

These days, she has been documenting her transition back to curly hair on her Instagram feed using the hashtag #CurlsLikeUsTransformation, while also championing other curly-haired women via her account @curlslikeus. So, it made complete sense that John Frieda would snap up Humes to be the ambassador for the Dream Curls line and Curl Defining Créme ($5) product. We caught up with Humes for a good old gossip about hair, beauty and being a working mom.

I'm not sure how the initial conversations came about, but I heard from my agent, “You might do some things with John Frieda. What do you think?” I was just so excited. Frizz Ease was the first product I bought as a kid for my curly hair. That was the only thing on the market, so it was quite surreal—like, “Wow, I've gone full circle here,” which is mad.

I love that it’s a range tailored to curly hair. It’s perfect, and what’s funny is that Frizz Ease was what I used when I was younger, and although all these products and brands have come out, I’m still using John Frieda.

My favorite product is so good; it’s the Curl Defining Créme ($5). I love that it holds my curls without being crunchy. My hair still moves and is soft and not frizzy. It's hard to master that. 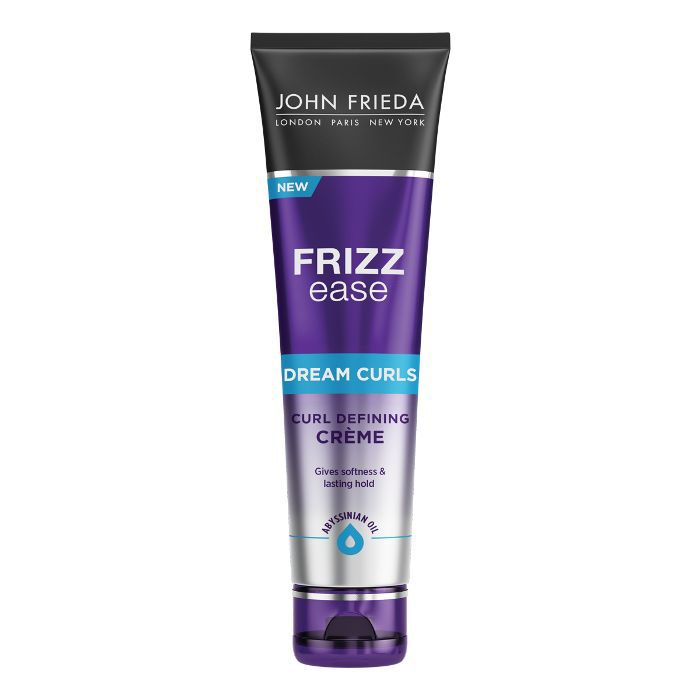 I think that was my idea of getting ready to be presentable. I think maybe copying friends and being like my friends helped me feel the same way they did. Straighteners—when they came out—were such a big thing, and everyone had the same dead, straight hair. Then, moving on from that, when all the chemical straightening was a big deal, I started using that. But chemicals are so bad because you don’t know what’s in it.

Originally, my little girl. She said she didn’t like her curly hair, and it was different from everyone in her class. She wasn’t comfortable with that. I tried to explain to her that mummy’s hair is the same, and she had no idea that I had curly hair, which is a sign that she had never seen me with it. It was an eye-opener me, so I thought, "I’m going to do this for her to try and show her that we’re the same and that it’s a good (and nice) thing to stand out." Now, she has fully embraced her curls, which I love. I can’t believe how much it made a difference. She actually can’t remember not liking her hair.

It’s still very much the journey—it's definitely not over! Essentially, after straightening it, all you can do is grow it out. Really, you’d be better off shaving your hair and starting from scratch because it’s so porous. I’ve just been doing what they call a “transitional cut,” (aka baby bits), as I’m not brave enough to cut it all off. I'm cutting it every two and a half months. I thought that by January/February, I would have grown a fresh head in just over a year, but everyone says to give yourself two years because by then, it will come into its own again.

It was basically identical to what my little girl’s is like now. I’m so jealous. I just scrunch something in her hair and it’s amazing straight away. Whereas with mine, I have to really nurse it. It’s a labor of love. When I was about 13, with all the hormones and puberty, it went really coarse and tight. Then it went the other way again. Then pregnancy made it even softer.

Everyone feels insecure about something. Hair is such a big deal and can affect how you feel about yourself. What I’ve realized (which is a real mum thing to say) is that with time you realize what you naturally look like tends to suit you best. You spend all this time trying to get away from that, but you look fresher and more youthful as you. I’m not saying "don’t wear makeup," but natural makeup, I think, always looks best. I think little tweaks are okay, but generally, what is natural will look best on you.

You realize this when you try everything in the book, and that’s why I can sit here and say this because I’ve tried every style and color and I'm quite comfortable now. If I could take the hair of my 15-year-old self and plonk it back on my head, I would feel like I won the lottery.

Mine are influencers: a girl called Lauren Lewis, who I actually featured on my blog. She has the most amazing hair. I shot with her for a day, and all she did was wash her hair the night before. Before we went on set, she didn't do anything to it. Lauren didn’t have to wet it or diffuse it. She just used a wide-tooth comb. She was the envy of everyone in the room!

It stems from doing everything in the shower. I put a leave-in conditioner on in the shower, and then a curl cream on when my hair’s still sopping wet. That’s the best way to lock in the moisture. If you apply the product to dry hair, the frizz will have already got in (then you’re putting product over frizz, so then that’s just what you’re going to get). With curls, the wetter, the better.

I would never use a towel to dry my hair, as it would create friction and frizz. A lot of people use frizz-taming towels, which is essentially like a cotton T-shirt but in a towel shape. I, however, squeeze as much moisture out as I can. I wring my hair with product in my hand and get rid of all the water like that. I leave it to dry 90 percent naturally and then diffuse it. It affects the curl if I diffuse it too soon. It either goes frizzy or the curl drops. The curl needs to set itself. I add in the volume with the diffuser.

Recently, I’ve learned so much about hair. Everyone wants a quick fix. I take time now to look after it. There isn’t really a secret, I just try not to knacker it with loads of bleach. There are things now that you can do when coloring like Olaplex, a bond rebuilder. Just try to look after your hair. Whether you have curly hair or not, heat is not good for it, so try to cut down on the amount you use. Healthy hair will act better and behave a lot more when you then use heat.

You have way less time, which is great now that I’m going back curly. Hour-long blow-dries are a thing of the past. I’m probably a bit more tired too. I use an eye cream now, which I didn’t before!

Pregnancy, with my skin and hair, was the best time ever. I felt sick and disgusting and gained lots of cellulite, but the skin on my face and my hair were the best it’s been. I wish you could take whatever that is in a capsule form. I was lucky I got the glow but I didn’t feel it. I look back now and think my skin was so nice there and my hair was thick, but I felt gross! But once both of the girls were about six months old, I started losing hair at the front on either side. That was horrible. I wasn’t really aware, as I got my hair done at work. It wasn't until I was out with the kids one day and Marvin took a picture for me. I had my hair scraped up in a bun, and we were at this farm place with the kids. I was like, “What?! Does my hair actually look like that?” and he was like, “Yeah,” and I was like, “I have no hair!” I felt awful, but it does come back. It’s one of life’s lovely things that no one prepares you for. I didn’t know I was going to go bald either side of my head. It was just a bit of a shock at first.

Well, my mum was just very old school cleansing, toning, and moisturizing. I remember that. I haven’t heard her mention it for years, but that’s what I grew up around. You must cleanse, you must tone and you must moisturize. That was a real treat when I was bought my first cleanser. I thought "I've hit the good time."

Lancôme Hypnôse is my favorite mascara. I use Benefit Ready, Set, Brow!, and I love Chantecaille Future Skin Foundation in Banana. Nars Soft Matte Concealer, I love that. I like the creamy one as well, but it depends on what foundation I’m wearing. The Chantecaille foundation is quite light, so I like a good concealer. The Sisley Eye Contour Mask is really nice.

I’ve started exfoliating morning and evening. When I’m at work and getting my makeup touched up a lot over and over, I like to make sure everything is gone. I take my makeup off and then scrub. I use one that is an exfoliating cleanser, and it’s gentle. It says use morning and night. I’m definitely noticing the difference in doing it. I started because since I’ve gone back curly, I’m putting a lot of product in my hair, and it’s transferring to my skin. I was getting a little bit of a breakout on my forehead.

I love reformer Pilates. I’m on the go anyway. I have a busy lifestyle and two kids. I like Pilates, I sort of feel like I’m meditating when I’m doing it. It’s my hour to take for myself. You can’t think about anything else because you have to concentrate. I haven’t had time the last couple of weeks, so I’m going to make a pact with myself to go back next week. I’m either really good or I’m not so good!