In the fragrance world, Louis Vuitton scents are kind of…illusive, which, unfortunately for me, only makes me want them more. For years, they’ve been taunting me, beckoning me to smell them but being just far enough out of my grasp that they have thus far evaded me. “That’s fine,” I lied. “I have a billion scents! I don’t need those. I don’t even WANT them.”

But then I saw the arrival of Étoile Filante and I knew this little game I was playing with myself wouldn’t last much longer.

I think a lot about how brands bring fragrances to life through a screen. Talking about a scent while you’re wearing it is challenging enough. But explaining a fragrance using words alone? It’s almost impossible. So obviously I chose it as a career.

I’ll admit it: they got me. Louis Vuitton describes their new scent saying “Experience a journey of light… Like a sun in the heart of the night, the shooting star sends a universal message of hope…”

Described as a bouquet of osmanthus, magnolia, and jasmine with a top note of juicy strawberry, I was intrigued. I don’t usually die for florals, but a strawberry note? What could this smell like? What would their idea of light smell like?

Light is a lot like scent. You can’t touch it, but its presence is unmistakable. You don’t think about it when it’s there, but you miss it when it’s gone. 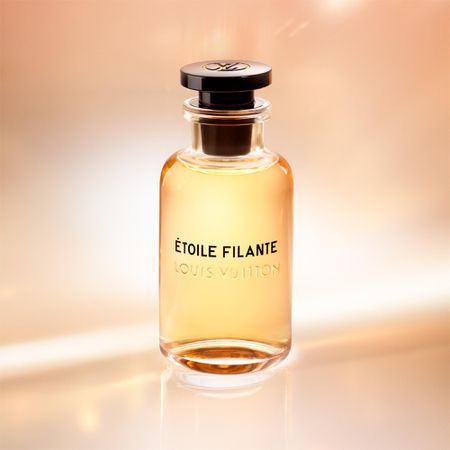 Étoile Filante takes a lot of things that I don’t usually like in fragrance and serves them up in a way that I do. Thanks to its middle notes of osmanthus, magnolia, and jasmine, the scent is predominantly a while floral. Scents like this usually repel me, but instead of being powdery, dry, and dated, this feels fresh, clean, and almost aquatic. It’s light, airy, perfect for springtime and never ends up wearing on your nerves.

This is in part thanks to the juicy strawberry note at the top of the scent. It elevates the whole fragrance with a sweetness that’s subtle but impactful. You don’t notice it straight away, it’s not like a big, juicy, ripe strawberry note, nor is it confectionary like strawberry bubblegum. More so, it takes a back seat to the florals and gives them another layer of depth, something different for the nose to grab onto.

I noticed that the strawberry note would often jump out at me as I wore. Every now and then, I’d catch a bright, juicy note bouncing off my skin, making itself known even through all the florals. That was my favorite part of wear and of the scent as a whole: just when you think it settled and you figured it out, the strawberry would surprise you again.

Instead of being anchored by woods, vanilla, or amber at the bottom, as so many fragrances are, Étoile Filante is only held down by white musks, making the base foggy and vaporous. Musks are often used to enhance other notes or let them breathe, rarely are they the only thing to ground a scent, because they’re not very grounding at all.

Of course, musks can be worn on their own, and many scents are based around musks, but even those often have something else at the base. Somehow, this works. It adds to the lightweight feel of the scent and doesn’t take away from its longevity. It wears very well all day, still as apparent at the end of the night as it was when you sprayed it on, but never getting stale as many florals threaten to do.

I thought I knew what I was getting myself into with this scent: light, white florals. And yea, maybe that’s it, or a lot of it, but it’s also so much more. The addition of the juicy, red strawberry and the exclusion of anything other than musk at the base really to work to make the florals shine in a new way. It adds to them without overcomplicating them.

This would be perfect for those who love a classic floral scent, the sort of thing you think of when you think of perfume. But it’s also great for a person like me, who usually detests a typical floral and wants his fragrance to smell like anything but flowers. I keep going back to this, though. It think it’s a really interesting take on a classic, and shows that, when paired right, you don’t really need much to put a new spin on something familiar.

So was the Louis Vuitton scent worth the hunt? Yea, I would say so. If they’re all blends of classic and innovation, then I’m eager to smell the rest of them.

There are a lot of ideas at play here, but it works because Étoile Filante combines a few notes to achieve a scent that is half traditional, half surprising.

I keep thinking about its concept of light, how it tries to portray light through fragrance, and if it’s successful or not. I think, too, about the similarities between light and smell. Étoile Filante is a fascinating take on light as a scent, and also light in terms of weight. It’s bright white florals mimic the purity of light, while the sweet top note is like the added warmth of golden hour. It’s overall a very breezy scent, without any heavy notes to weigh it down.

I think I'll keep wearing this well into the spring and summer. I love how it keeps me on my toes as it evolves on my skin, and I can't wait to see how it wears from a gloomy winter to a spring that is sure to be full of light.