This Vintage Makeup Packaging is Beyond Beautiful

Think about how different makeup looked in the 1990s. Yeah the styles were different, but the products themselves looked like they were from another universe. The design has received a bit of a renaissance now, but who could forget the glitter, bright colors, and over-the-top fonts that littered every label, from Lancôme Juicy Tubes ($20) to L.A. Looks Styling Gel ($4)? We're all still kind of feeling betrayed by the inconceivably harsh formulas of Sea Breeze and Sun In. The '90s were certainly a different time.

If beauty formulas and packaging were that different 20 years ago, consider how they must have changed over the past century. Or actually, in some cases, how much they've stayed the same. What were the Juicy Tubes of 1925? That question piqued our curiosity, so we went on a research bender to find the following makeup products, which date as far back as the 1800s.

According to beauty blog Icaria's, this light, powdery blush formula was invented by Alexandre Napoléon Bourjois in the 1860s, and the product is made almost the exact same way today. Early on, the tins were made of cardboard and finished with galuchat (shark or stingray skin) to create the look of leather. The hand-painted packaging is a thing of wonder.

A hundred years ago, French beauty brand Molinard crafted its lipstick tubes out of wood. This bright cherry-red color was all the rage during the flapper era.

In the 1920s and 1930s, blush (although it was called rouge,) came in these stunning gold, refillable compacts, which contained puffs rather than brushes. This stunning, bubblegum pink shade is called Framboise, or "raspberry" in French. 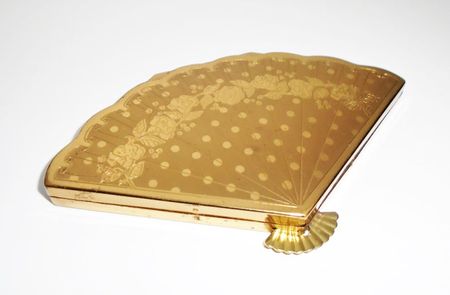 Ninety years ago, this fan-shaped compact contained powder and a mirror, making it ideal for on-the-go application.

"Cake" mascara was the first-ever formula that women used, long before the tubed liquids we know now. The solid product was painted on lashes and brows with a tiny brush, creating the ultra-pigmented, clump-free look we find on film stars from the era.

Cake mascaras are still available today—check out this vintage-inspired pick from Bésame Cosmetics ($28).

This compact rivals any luxury brand's packaging. The painfully pretty silver and enamel case contains a powder puff so much fancier than the no-frills sponges we see today.

It takes a lot of personality to display your favorite lipstick tubes in such luxurious fashion. This ornate gold case from midcentury New York looks like something out of Versailles.

These intricate brass bottles, called surmadani, have been used in the Middle East for centuries. They are meant to hold black kohl eye makeup, which some cultures believe protects children from the evil eye.

Pond's has been a tried-and-true skincare brand for decades. Its packaging, however, has undergone a major evolution since this delicate pink powder compact was unveiled in the 1960s. (Look at how they package their powder now.)

If you're old enough, these geometric blue Dior lipsticks will remind you of your childhood (or teen years, or adulthood). You might even remember that distinctive, powdery scent that came along with them.

This Vintage Makeup Packaging is Beyond Beautiful