Plus, the de-puffing mask she keeps on deck. 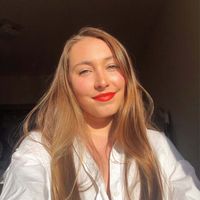 Adi is a freelance writer covering beauty and wellness. Her work has been featured in InStyle, Coveteur, and Byrdie.

The way Raffey Cassidy fell in love with beauty is almost picture perfect. At age seven she would do her mom’s makeup on the train while the pair traveled to London for auditions, a sight she recognizes now must have been strange for people to witness at the time. But like any true devotee, it didn’t stop there. On the set of Tomorrowland she met makeup artist Monica Huppert who indulged a 14-year-old Cassidy’s interest in special effects products. “She gave me all the equipment to do fake cuts and bruises and for ages I was really interested in it. When I became a teenager I started experimenting with makeup on my face and trying to keep it more natural. Not wearing too much but just enough to enhance certain features,” the actor explains.

Years after those glam-filled commutes, the 21-year old now calls London her home, and has had continued success in her career with movies like Vox Lox and a close relationship with Miu Miu. Her latest film? White Noise, a highly-anticipated adaptation of the acclaimed 1985 novel which follows a family who has to evacuate their home after a nearby chemical leak. She is joined by stars Adam Driver and Greta Gerwig who play her parents in the comedy drama. “I think that people will be shocked that it has so much action,” Cassidy teases. “Even if you haven't lived through the ‘80s, I think it's so nostalgic and kind of a blast from the past, because it's almost cliche ‘80s.” Lucky for us, the film is streaming on Netflix starting December 30, so we can watch for ourselves.

Below, Cassidy shares what it was like preparing for her recent role, the her beauty obsessions, and the reason why you’ll never find her on social media.

The One Thing She Does to Prepare for a Role

"I love marking up the script. This film was a fun one because unlike any other director I have worked with, Noah [Baumbach] actually gave us so many books that we would've had were we living in that period. We were given assignments to watch the best films [from the time] and a copy of the Guinness World Book of Records from the '80s. So that was really cool. I am ashamed to say I hadn't seen ET before this. Obviously that would've been a really popular film at the time so I watched that and now I think I've watched it like four times. I'm hooked!"

The One Thing Always Has in Her Trailer

"I always have lavender essential oil because I find it really relaxing. My mum always used to put those little sacks of fresh lavender next to my bed. It kind of makes me a bit tired, which I guess isn't really a good thing on set [laughs]. So, I have to be careful I'm not overusing it.”

The One Product She Uses Every Day

"This is a hard one for me because I am not one of those people who uses the same product for ages. I really like trying different things. However, one thing I always reach for is my eyebrow gel or else I feel quite unkempt for the whole day. Right now I’m trying the new Got2B gel and it’s very good."

The One Thing She Does Before Bed

"I always do my skincare routine and light a candle because it is quite a long [process]. I'd say my favorite product that I'm using right now is the Clinique Cleansing Balm that removes your makeup. It makes my skin feel so soft. That's one thing I've actually used for like a solid year."

The One Product She Uses For a Moment of Self Care

"Putting on a face mask with my pajamas on. I actually can never do my skincare without my pajamas on at night time. I love sheet masks because they're just easier. You can peel them off and then you don't have to go and wash your face again. I currently love the 111 Skin De-Puffing face mask because it really does work. Sometimes if I wake up a bit puffier I put that on and it goes straight away. I also like their under eye patches. If you put them in the freezer they’re so good."

The One Beauty Hack She Swears By

"When I do my everyday makeup I love putting blush on my nose. It just makes me feel so much better. I think it does contour somehow if you just pop it on the top. It's what makes me feel ready for the day and gives you a sunkissed glow"

The One Thing She Loves About Fashion

"My mom really made me love fashion. She collects clothes, so I wear items from when she was a teenager that have come back into style. I like fashion because everyone can express themselves differently—even before speaking to someone you try to get their personality through clothes, which I find fascinating. If you feel rubbish about yourself and the day is not going your way, then you put on a good outfit, I love the confidence it brings."

The One Thing That's Her Closet Staple

"An oversized hoodie. I just think it always pulls an outfit together. It kind of gives it that cool edginess and just makes me feel like myself. That's the one thing I can think of that you would most likely catch me in everyday."

The One Thing She Would Do if She Wasn't an Actor

"I hope I would be a forensic scientist. I love murder documentaries where it feels like you are with the investigators trying to discover [the crime]. It's all very fascinating to me. I think I would've really liked to do that. I did psychology at school but it didn't quite give me the qualifications to then go on and study it at university. So I did film instead."

The One Reason Why She's Not on Social Media

"I think once people get involved in it, there's then that expectation to comment on things, post, and keep people entertained. But I've never done that so there isn't any expectation of me. No picture I ever take is serious, they're all silly. If I were to share those I definitely would regret everything I’ve ever posted in a few years. So I think I am better off for everyone else's sake to not have Instagram."

Ryan Destiny Says This One Ingredient Transformed Her Skin