I Was a Die-Hard Barre Fan… until I Tried P.Volve

written by
Audrey Noble
Audrey was an associate editor at Byrdie. She has also worked with Allure, New York Magazine, InStyle magazine and Refinery29.
Byrdie's Editorial Guidelines
Audrey Noble
Reviewed by
Jen Polzak
Jen Polzak is a personal trainer who has been in the fitness industry for over a decade, specializing in nutrition coaching, post-rehabilitation exercises, and weight loss.
About Byrdie's Beauty & Wellness Board
Jen Polzak
Fitness Instructor

When I got the invitation to try the workout that helped some Victoria's Secret models, including Blanca Padilla, get in shape for last year's Victoria's Secret Fashion show, I started mentally preparing for the hardest workout of my life. Apart from being genetically blessed with long, lithe limbs, these women work extremely hard to get fit for what's arguably the most famous fashion show in the world.

My workout regimen at the time included a barre class at least twice a week (three or four when I'm really good). I'd also throw in a few boxing classes here and there when I had the time. I felt that at the very least, I would be able to finish the class without terribly embarrassing myself. But what I learned was that none of those high-intensity classes that I spent years doing mattered. P.volve, formerly known as Bodies by P, is all about low-impact.

How Does It Differ from Barre?

"[Barre classes] are missing very essential steps," said P.volve founder P. "You can't even activate your inner thigh and most of your butt if you don't have mobility in your hips." After going through physical therapy for a football-related injury and learning at the Gray Institute for 15 years, P has been developing his own workout classes. It's through those experiences he realized the key to getting toned is all about hip motion.

"If you don't have the motion in your hips—internal rotation, external rotation, abduction and extension—and don't have all those bases covered, you're not constantly working on getting your butt to really develop and you can't get the thighs to slim," he said.

So What Is P.Volve?

The best way to really activate that hip motion is through smaller movements and low-intensity, versus high-intensity ones, like those killer pulses where you pretend to sit in a chair on your tiptoes, arms extended and holding on to a ballet bar and pulse to an EDM remix of your favorite top-40 song for three minutes straight. By the end of it, your thighs will burn, and you may or may not have difficulty walking down stairs for the next week. A burn that I thought meant the workout was working, apparently only gives me short-term results.

"The thing with high-intensity workouts is with high intensity, you're rushing everything. You're skipping over what generally happens," said P. "Unless you're a pro athlete, I can say just about most people are pushing through their joints and their form is off. So it doesn't amount to anything and it beats the hell out of your body."

He explained to us that the more you use your joints for motion, the more pressure you put on your knees and ankles, and that will eventually cause inflammation and swelling.

"I think his training is good because he explains everything in detail, so as you saw before, you listen to him and follow, but that's why I think it's so important to—for example, with training—keep doing it at home and keep being consistent," said Padilla. "This workout is good because you can do it anywhere. Honestly, I do it in my hotel rooms."

How Long until You See Results?

From May to the show in November, Padilla worked with P every single day, squeezing in a workout wherever and whenever she was able. As a result, she says her posture drastically improved and she got abs.

Every class is different, as P doesn't stick to a routine and really focuses on making sure clients open their hip movement. There were a lot of side lunges, slow squats, and the use of a special piece of equipment he made himself called the P.Ball. 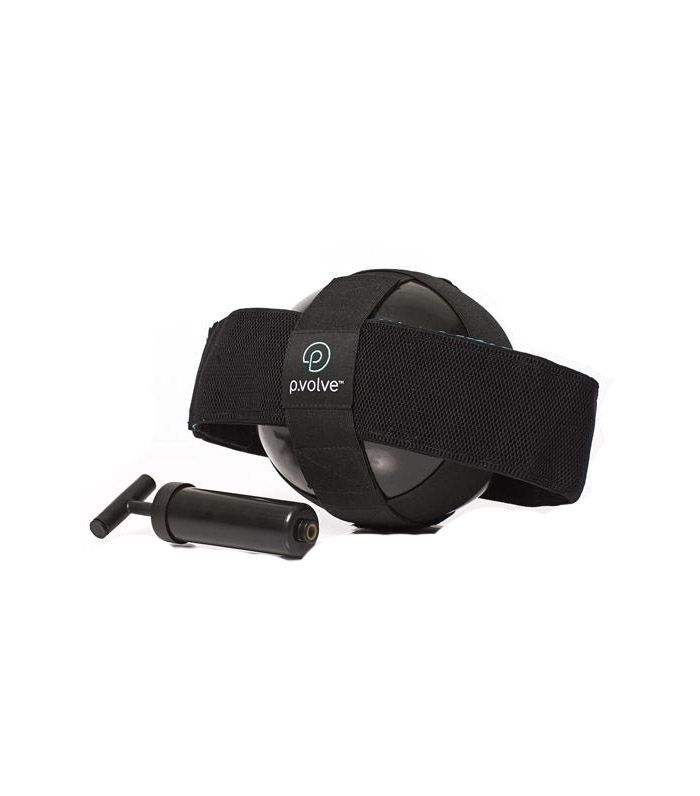 The P.Ball looks like a Pilates ball, but is harder in pressure and has a strap attached to it so that when you put both legs through the assigned holes, the ball stays in place.

"I just take these exercises where you're hitting different angles and you're strengthening your connection. You're not doing anything crazy, you're just straining that muscle. It's just activation and you use that ball, and I've actually found it has a lot of second-term benefits. It tones the hell out of your outer thigh and the very bottom of your butt," he said.

With the ball, we hit the floor, squeezing the ball in sequences to get our thighs to burn. While it didn't tire me out like a Pilates or barre class would've, I definitely felt a burn.

For those who cannot make his classes, which are held in a studio in Chinatown, you can also download P.Volve workouts online and do them from the comfort of your own home. "I made it so it doesn't matter what your fitness level is," he said. "I talk through the entire thing nonstop, trying to make it a one-on-one training session. I'm trying to build it like a program."

The most interesting part is that I was barely sweaty. P told me that it takes a couple of classes to really start seeing the results. Harder and sweatier doesn't always mean better. Having done barre for over four years now, and only getting a quick glimpse of what abs might look like on me, if his clients are any indication, there might just be something to be said about low impact versus high after all.