The *attraction* is immediate.

Mascara is, without a doubt, one of the most metamorphic makeup products out there. A single swipe can make your eyes look larger, more alert, and vibrant, quite literally framing them in fluttery black—or brown or purple or green—hairs like curtains around a window. But really, who wants to stop at one swipe?

When it comes to eyelashes of all sorts—be they faux, extended, or mascara-enhanced—more is definitely more. The popularity of so-dubbed “stackable” mascaras designed to load up the layers is all the proof you need. And while it may seem like mascara technology is all but explored (it’s been around commercially since 1872, but there’s evidence of more rudimentary versions going back to 3400 BC), it turns out that magnetics might be the key to your biggest, boldest lashes ever. PÜR Beauty’s best-selling Fully Charged Mascara ($22) utilizes the electric, magnetic energy that naturally occurs in the human body to lift, plump, darken, and separate lashes for a falsies-level look right at home. Below, we’re exploring exactly how the technology works.

If the idea of magnetic mascara brings you back to science class, you’re not alone. But while the concept might seem futuristic or high-tech, it’s actually based around an old-as-time biological feature innate in all humans. “Electricity is everywhere, even in the human body,” explains Lynnette Cole, Global Education Director at PÜR—and in fact, it produces around 100 watts of energy at rest, which is enough to power a lightbulb.

Our eyelashes, as it turns out, are full of negatively-charged electrons—and if you load up mascara with positively-charged protons, you get lashes that physically seek out every spec of hair-shellacking, drama-inducing mascara possible for major volume, length, and dimension. And that is precisely how PÜR’s Fully Charged Mascara works. A choice pick of celebrity makeup artists like Nydia Figueroa (she worked Victoria’s Secret runway shows for years) and Adam Burrell (who counts Winnie Harlow, Kris Jenner, and Madison Beer as clients), the mascara has become a full-fledged cult classic for PÜR, racking up nearly 2,000 rave reviews on Amazon alone. 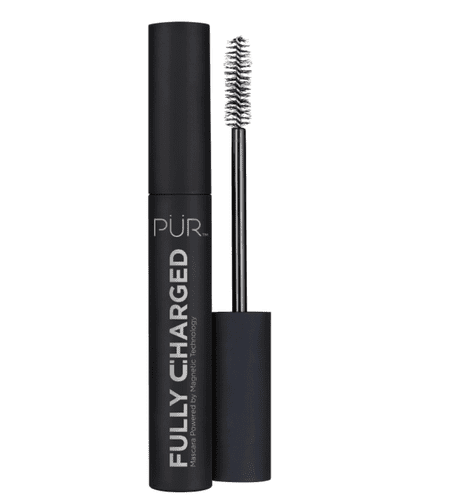 While the formula is magnetic in practice, it is important to know that it appears here as a synthetic magnetic polymer composite—a man-made conglomerate of molecules safe for the eyes. But that's not the only ingredient in this formula.

"This vegan formula includes lash-loving ingredients like vitamin B5 and Biotinoyl Tripeptide-1 to help volumize, strengthen, thicken and lengthen the appearance of lashes," Cole tells Byrdie. B5 is a classic conditioning, hydrating vitamin, often popping up in other cosmetics like blushes, hair masks, and hyaluronic acid-centric serums.

And despite its science-y sounding name, check out the six letters of that last ingredient: biotin. A form of the same peptide famed for encouraging hair growth and fullness (though mainly anecdotally, it should be noted), it's included here to help with lash health and lifespan. That's actually a primary goal of the mascara, according to Cole. "Eyelashes roughly have a 3-6 month lifespan," she says. "Fully Charged Mascara is an age-defying mascara that fights the eyelash follicle aging process by conditioning lashes to help prevent premature fallout."

A science nerd at heart, I knew this was a product I was excited to try—mainly to see how it compared to my other, more traditionally formulated mascaras. When pulling the wand from the tube, I first noticed just how unassuming the actual bristles looked. I'm used to the fiber-packed, hourglass-shaped wands popular today, absolutely loaded with product, and I wondered exactly how Fully Charged would stack up.

TL;DR? Wonderfully. This mascara is shockingly delicate, lightweight on the lashes, and very defining—it grabbed even the finest, littlest hairs along my lashline. It infused them with just enough color and length to add that enviable flutter. The effect was instant Bambi lashes, which is the look I'm going for exactly 100 percent of the time. But in the interest of true journalistic exploration, I had to defy my instincts and continue packing it on to see how those who prefer bolder lashes would find it.

Here, the mascara did falter a bit and began to get a bit clumpy, especially on the very tips of the lashes. I know many people are into the cool, clumpy retro look (it is undeniably fun, can't lie), so if you are, you'll love this. You'll also love it if you're interested in an everyday, fresh-faced vibe. Really, the only people who might not obsess over it are those who are a bit more in-between. For my part, this is a product I'll be keeping on hand for those days that require a bit more than my usual single coat of brown mascara—times when I need a little more spark.