I'm a sucker for moisturizer. I know, I know, how old fashioned of me. Most of the skincare world turned their backs on the stuff months ago, claiming skin would be far better off (more balanced, less oily) without it during the day. Well, I ignored that advice and carried on anyway, mainly because I'm so addicted to a twice-daily slathering of rich nourishing cream, but also because I'm petrified that if I take my skin off the regimen I've followed for years and years, it might freak out and serve up the acne I managed to dodge in my teens.

So that's where I stand: A moisturizer user and proud of it. Well, kind of. Between you (the internet) and me, I've started to notice that my T-zone seems to repel all makeup by 11 a.m., sending my foundation on a slip-and-slide southwards. I'm slightly concerned I'm hurtling towards a massive "I told you so" moment. But what about if I opted for a different kind of moisturizer? One that would fill that gap in my skincare routine without me having to admit I was wrong all along, whilst keeping my foundation exactly where I want it to be. Enter Previse Hydrofoam Hyaluronic Moisturiser ($48)—a moisturizer that I'm certain can do just that.

Keep scrolling to find out why this single bottle is challenging everything I thought I knew about moisturizer. 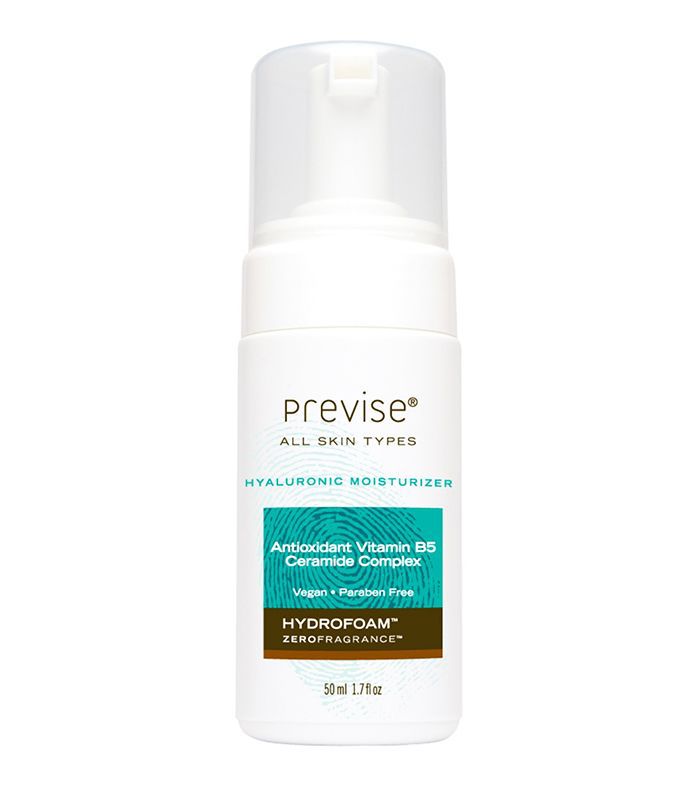 Unlike the cream texture that moisturizers are known for, this one spurts out of the bottle like the froth that sits on top of a pint of beer. It's light, fluffy, and collapses into a clear silky fluid as soon as your fingers touch it. In skin terms, that means it doesn't leave greasy film atop the skin's outermost layer and instead splashes it with a watery essence not too dissimilar to a toner.

You could easily claim that this "moisturizer" isn't a moisturizer at all, but there on the back of the bottle are the usual suspects of hydration: hyaluronic acid, ceramides, and (botanical) glycerin. And it gives skin the same instant sheen of a moisturizer too. But what about the makeup test? I've applied a full face of concealer and liquid foundation each day this week, and I swear its longevity has increased three-fold.

And as for a breakout, well, it's completely unscented and free of all synthetic dyes and parabens, so my skin barely notices it's there, and just sucks up its hydration power without even a sign of mild upset. I'm not ditching my Glossier Priming Moisturiser Rich ($35) just yet, mind. I'll continue to massage massive dollops of that magical elixir onto my face every single night, but as for mornings, you can count me as a full-fledged foam moisturizer convert.

Up next, want to peek inside the night time routines of the world's most beautiful women? We wouldn't blame you.