Finally: A Beauty Book Written for Women With Cancer

Like many health-related subjects, cancer is one of those topics that no one really likes to talk about. Not only does the condition scare us to the core, but it's also intimidating. After all, how does one wrap their head around a disease that taunts the female population with roughly 852,630 reported new cases per year? That's a hard pill to swallow, so it's no wonder so many of us begin to choke on our words.

Although almost every month of the year is dedicated to raising a certain breed of awareness, those are discussions that typically occur on a macroscopic scale. Significant and beneficial? Without a doubt. But what about those in-between moments when a woman is mourning that last tuft of hair or a puffy face that appeared virtually overnight? It's those outwardly microscopic moments in time that require some much-needed attention because to those directly impacted, they're anything but.

Thankfully, industry-shaking women like Caitlin Kiernan are rising to the challenge. In her book, Pretty Sick: The Beauty Guide for Women With Cancer, Kiernan fills the adorably illustrated pages with bits and pieces of wisdom for those everyday moments—providing insightful, beauty-related advice for the kickass woman who has no intention of letting a disease like cancer get in the way of her all-around fire. One takeaway: If you look good, you feel good.

In Kiernan's words, "I decided to write Pretty Sick back in 2012 after I was diagnosed with breast cancer. At that time, I was a magazine beauty director and continued working during treatment. It was important for me to try and look like a version of my 'normal' self so that I could keep things relatively routine at the office and when I was interviewing people."

And according to Kiernan, there was nothing more devastating than someone's double take: a thoughtless second-guessing of not only her ability to perform but also her appearance: "To me, there was nothing worse than when people would ask me, in a hushed tone, 'Are you okay?' While I appreciated the concern, it was such an awkward question to deal with."

According to a recent blog post by the author, there was also a shortage of information online. Sure, there were plenty of traumatizing images, testimonials, and documented experiences, but there were glaring deficits when it came to the topic of beauty: "When I was having surgery and going through treatment, I did a ton of research and often came up empty-handed. There wasn't one place I could go to get the intel I needed to learn how to care for my nails, skin, hair, mouth—even my vajajay—during cancer. That's when I decided to take all the advice that really helped me and make it into a book." 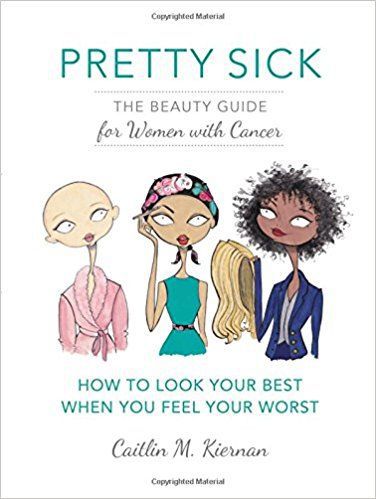 From skincare to wig shopping, Kiernan doesn't bat an (admittedly) false eyelash, and her comprehensive beauty guide for women with cancer can hopefully be one (of many) puzzle pieces to help every woman start to feel whole again. After all, everyone deserves to feel confident, and why let cancer rob us of anything more? Available today and illustrated with enchanting images by Jamie Lee Reardin, this is one to bookmark.